“My wife’s name was Lucille. She got me through.”

I’ve been a big Negan apologist for a while now but this might be the first episode where I’ve come out of it siding with him over good ol’ Rick. ‘Still Gotta Mean Something’ went a long way to humanising the big bad Negan (a wonderful Jeffrey Dean Morgan), even if it was only through his short Lucille speech and him being (sort of) kind to Jadis. It was the first time we’ve learnt anything of his pre-apocalypse life and while slight, it was interesting to learn that before all this Negan was a seemingly ordinary dude. I’d still like a Negan only episode (like the Governor had back in season 4) or a Negan flashback but this was a good start. Rick, on the other hand, is coasting entirely on goodwill and southern charm at this point. 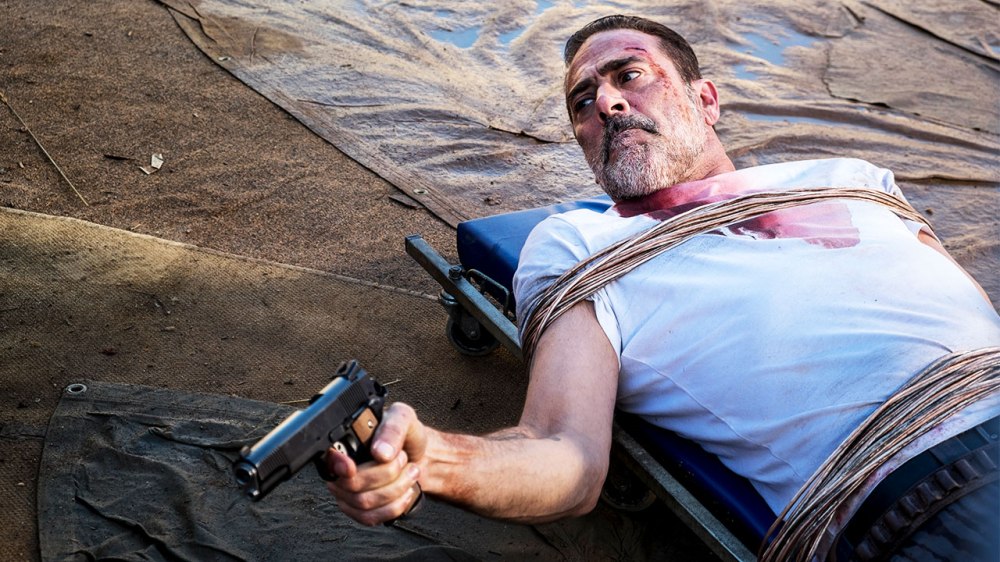 After being captured by Jared and the rest of the escaped Saviours, Morgan and Rick make separate attempts to gain their freedom. Morgan sticks to his crazy roots and threatens them while Rick offers them redemption if they set him and Morgan free; come back to the Hilltop and work for them. And it kinda works – when a herd of walkers busts in the more gullible of the Saviours let Rick and Morgan go free. One of them even saves Rick’s life when a walker gets too close. But Rick didn’t wear his murder coat for nothing, so right after Saviour bro saves him, Rick returns the favour by stabbing him in the back. Literally. With his hatchet no less. It’s an interesting turn for our ‘protagonist’ to take and while we’ve seen brutal Rick before, Terminus or Gareth the cannibal come to mind, the people at the receiving end of his wrath have always more or less deserved it. But the biggest crime these saviours committed was to simply be affiliated with Negan – hell, most of them were ready to let Rick go and start working for the good guys. It’s a testament to the show and most of all to Andrew Lincoln that, even after all this, we can still root for him. I still believe in Rick Grimes. Well, sort of.

Another surprising character this episode was Jadis (Pollyanna McIntosh) who has quickly become one of the shows most interesting characters. Her heart to heart with Negan humanised her as much as it did him but the biggest revelation was that she’s in contact with someone with a helicopter. Almost certainly the same one Rick saw at the beginning of the season when he was making his way to the dump. Could it be Cathy Durant and her weird group we met a few episodes ago? Or something else entirely? I somehow don’t think we’ll get an answer this series but it gives the subreddit something to dwell on. As for the rest of this series? Well, I’m positive it’ll end with Rick sparing Negan. And the humanising that the show’s been doing recently must be setting up the controversial ‘Negan is good’ arc from the comics. How/if the other characters will go for that though is a mystery, especially Maggie; who wants Negan to pay for murdering Glenn. We’ll have to wait for the finale for that though. Next week it looks like Negan will have to deal with the traitorous Simon, who went against Negan’s word and wiped out the trash people. It might be difficult to say bye to Steven Ogg but if it’s Simon or Negan, I am resoundingly #TeamNegan.