The penultimate episode of Legion was yet again another outstanding hour of television. Not only did the show keep up show runner Noah Hawley’s unique and inspired vision for the X-Men universe but it also managed to tie it in to the wider universe. And it was done even more organically than the MCU-ready Marvel/Netflix shows, which are usually limited to Captain America name drops or Iron Man background references.

This show continues to knock it out of the park with every single aspect of production but the direction is really something else. I’d go as far to say the show is more gorgeous looking than even Breaking Bad, Hannibal or Hawley’s own Fargo. This week directional duties were handled by Dennie Gordon, a long time director of TV and, curiously, the David Spade “comedy” Joe Dirt. But despite the (admittedly pretty standard) changing of directors almost every week the show still looks consistently fantastic. This week was no different – a particular highlight being the fabulous silent movie sequence, complete with silent movie-esque intertitles. The Eye’s death was even more horrifying because of it; there were no sound effects just grey-scale visuals and haunting soundtrack. The show’s use music in general is always wonderful. From David’s rendition of Kermit the Frog’s ‘Rainbow Connection’ to the fantastic Jeff Russo score the show constantly has at least one moment per episode where you’re blown away. During this episode’s aforementioned silent movie section the music was accompanied by music created in-world by Oliver Bird (Jermaine Clement in a very welcome reappearance) and his strange composing/telekinesis mutant ability. The music, a twisted version of Maurice Ravel’s Boléro, scored three different, wordless scenes as they all built to a crescendo. As well as the limerick spouting Oliver doing his weird composing thing we also had David escaping his mental coffin in search of Syd, and we had Syd and Kerry moments away from getting the same treatment as The Eye and getting origami-ed by Lenny/The Shadow King. And it was all incredibly tense; with this show literally anything could happen. 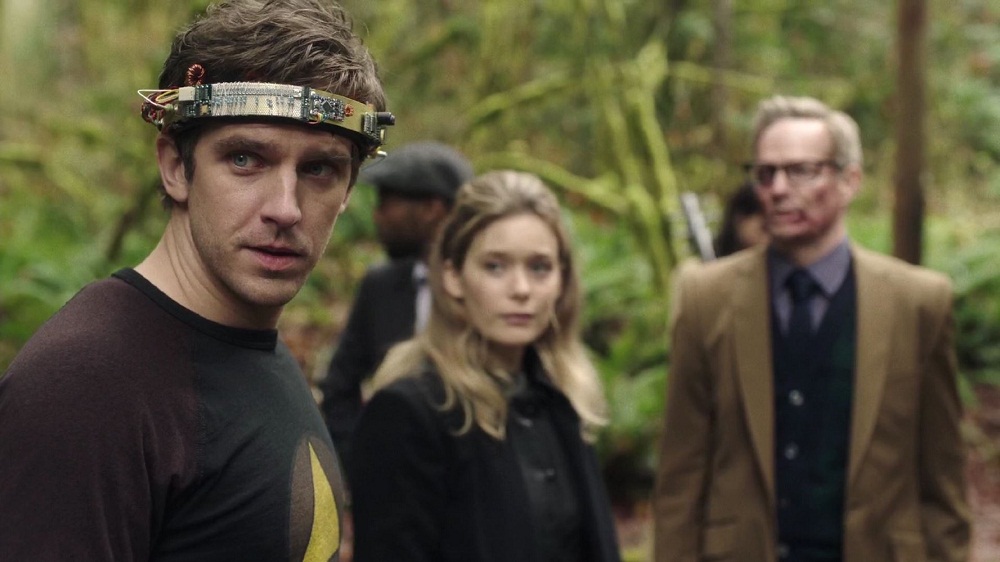 The reveal that the evil parasitic Lenny (a very good Aubrey Plaza) was in fact the ancient mutant entity known as Amahl Farouk, or The Shadow King, was perhaps the biggest reveal of the episode. But the much suspected ‘Charles Xavier is David’s father’ confirmation was maybe an even bigger bombshell. Not only did we have that extraordinary animated sequence (more on that in a minute) but we also had a shot of that famous wheelchair. And not even the whole thing, just the wheel (although it’s pretty unmistakeable). What this means for the series going forward I don’t know, Patrick Stewart has said he’ll reprise the role for something like Legion but is it really P Stew we need? If it’s a flashback it’ll obviously need to be the younger Prof. X, James McAvoy. But if it’s modern day Prof. X then where does that leave us? My best guess is to have either an alternate timeline or to set sometime before the weary and ravaged world seen in Logan. Or set the meeting between father and son on the astral plane, that way rules of time and logic can be thrown out of the window.

It’s Dan Steven’s David who steals the show this time around with his excellent performance as both David and rational, British David. Is his Britishness a hint at his true Anglo-Saxon heritage or just an opportunity to have Stevens show off his wonderful vocal talents? Probably both, but it leads to one of the shows best scenes; the animated blackboard sequence. This was used as a way for David to power up and escape his mental prison but also as a cool way to explain the shows lore and the story so far to the audience. This is something more shows could take note of, actually slowing down to explain yourself is often badly needed. And if it’s done like in Legion, in one the most creative storytelling visuals I’ve seen in TV in a long time, then even better. The rest of the cast are fantastic too but the real standout for me is Jermaine Clements ice cube dwelling Oliver. The forgetful husband of Summerland leader Melenie is always the best part of the episode whether he’s confused about his wife ethnicity or reciting a limerick.

Legion continues to impress as it reaches it’s finale. The production on this show absolutely incredible, from the direction, to the music, to the cinematography, to the acting, everything is pretty much the best of what TV right now has to offer. How the show will end I’m unsure. Presumably the Shadow King will be defeated so where this leaves season 2 who knows. One thing’s for sure though; I can’t wait to find out.

Also, if anyone is interested here’s Oliver limerick from the episode:

On the chest of a barmaid in Sale,
were tattooed the prices of ale
and on her behind
for the sake of the blind
was the same information in braille.

Buy the comic that inspired the TV show: