“We are not monsters.”

It’s almost here! The war that has been building for over a season. The final pieces were put into place in this episode as the group finally got their hands on some guns (though their methods are a bit problematic). Elsewhere Sasha is in a pickle, and a cell. Though after her kamikaze mission into the Sanctuary last episode, she’s lucky to be alive.  Back at the Hilltop, Gregory goes full scumbag.

First up, the main group. We learn quickly that Tara did tell Rick about Oceanside, albeit reluctantly. And she still isn’t happy with it, she just knows there is no other way. The group blow some stuff up and herds the ladies of Oceanside outside and into a circle on the floor. This seemed familiar right? Rick has been back at his badass best for a few episodes now, but in ‘Something They Need’ is it possible he went a little too far over to the dark side? As he delivered his speech to Oceanside it was difficult to ignore the Alexandrians mirroring the Saviors. It brings back memories of when our heroes found themselves in a very similar situation. You have this unarmed group cowering on the floor as some people they don’t know steal their stuff. Rick’s speech, “This is just about what you have. What we need.”, seemed awfully similar to Negan’s way of doing things too. Though he might be echoing the baseball bat wielding psychopath, he’s still a few steps away from bashing in heads. But he seemed prepared to do whatever was necessary to get those guns.

Nothing gets people going like a herd of walkers. And we got some really cool walker action in this episode, as the group efficiently dispatches a group of them in the woods. The walkers looked awesome in this episode, like extras from Pirates of the Caribbean with barnacles and seaweed all over. This scene against the walkers gives you an idea of how prepared our guys are to fight, and they’re good at it too. It also shows how much you can get done when you work together. Alas, Natania was having none of it and Oceanside will be missing out on the war. I wonder if her story about how Negan killed all the men in camp is entirely true. Maybe she made a deal to protect the women of the camp? It’ll be interesting to see if she is what she seems. Right now I have my doubts.

It probably won’t come as a surprise to anyone, but Sasha’s one-woman mission to take out Negan backfired. In this episode we just cut to her in prison. Not showing her being captured seems to me like the writer’s way of acknowledging that yeah, there wasn’t ever a chance she’d be successful anyway. In her mind she would either kill Negan or die trying. But neither of those things happened and now she’s stuck in a cell. Enter stage right; Rapey Davey. He’s slimy and horrible and gets what he deserves after attempted to attack Sasha; a knife through the throat courtesy of Negan. This act seems to have endeared a lot of people to Negan. He kills and steals but he is 100% against rape, he has a twisted code. And that adds a lot of humanity to the character. Some naysayers will claim he’s just pretending or that he is still evil, but you can’t deny that this man thinks he is doing what is best for his people. 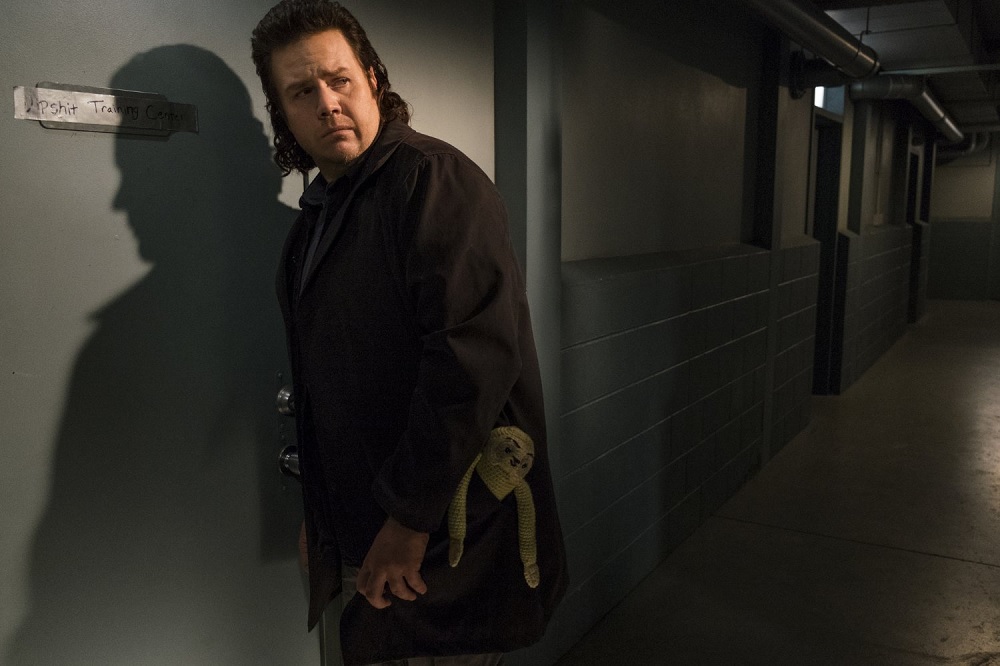 At first Negan thinks that Rick put her up to this suicide mission. Sasha’s response, “Rick? Your bitch?”, told him all he needed to know; Rick would never do anything like this. Also hopefully this isn’t just Sasha being mean to Rick, it’s her lying that he doesn’t have the balls attack (though she knows he’s off gathering weapons as she speaks). So from there Sasha gets the same offer to join the Saviors that Eugene did. Negan gave her the choices. She could try to kill him and fail, kill herself, or join him. She chose the latter option but obviously things aren’t as cut and dry as that on this show. She manipulates Eugene to get her a weapon so she can “kill herself”. She’s lying of course. Her emotionless face as she pretends to cry and trick Eugene is ice cold. And Eugene being Eugene gives her the suicide pills he made a few episodes ago. Stuck in The Sanctuary with a death wish and an urge to kill Negan, I think Sasha is about to meet Holly’s fate from the comics.

At the Hilltop things were moving very fast. Gregory and Maggie have a bit of a heart to heart before Gregory contemplates stabbing her. Yep, he’s gone from general slimy weasel to literally considering murdering a pregnant woman. Now I always knew we’d end up here, Gregory in the comics does very similar things. And I’m really glad they decided to throw this in now. Up to this point Gregory has been a joke, someone to watch out for but not someone to fear. But now, knowing that he almost stabbed Maggie, he’s a real threat. And Xander Berkley is just fantastic. I feel like his past 35 years as an actor and world’s best ‘that guy’ have all been in preparation for this role as the ultimate slimeball. And I wasn’t lying about him being the greatest ‘that guy’, seriously check out his IMDB. I recommend his role in Shanghai Noon.

After an embarrassment with some walkers in front of his people, Gregory shuffled back to his office. He called in his driver and told him to pack a bag. It looks like he’s taking a trip to The Sanctuary. Is Gregory Negan’s spy? Possibly. Ultimately however, Gregory will be killed. I very much doubt he will change his tune. At the moment he is a danger to the group and he seems to be siding with Negan.

In the final moments of the episode the gang returns to Alexandria to find Rosita waiting. Turns out it was Dwight she bumped into last episode. He’s come to help the group take down Negan. I realise that it will a take while to convince the group, Daryl will probably never like him, but I can’t wait. Dwight has been great on the show but after he changes sides in the comics he becomes one of the absolute best characters.

Next week it ‘s war. Seems like they’ve saved all the animation budget for Shiva, she looks awesome. I wonder how the show will handle the start of this war, I just don’t want it to disappoint the fans. But the signs are all good. We’ll find out next week when All Out War begins.

See where it all began with Volume 1 of the comic series.