“I’ve been poor my whole life, like a disease passing from generation to generation. But not my boys, not anymore.”

When we look back at the cinema of 2016 there will be a collective ‘meh’. It’s been far from a bad year, in fact we’ve had brilliant blockbusters like Captain America: Civil War, Jason Bourne, and Star Trek Beyond. But compared to flops like Warcraft, Ghostbusters, and The BFG, or over-hyped and underwhelming franchise films like Suicide Squad, Independence Day: Resurgence, Alice Through the Looking Glass, and Teenage Mutant Ninja Turtles: Out of the Shadows; the good blockbusters start to look few and far between. But look away from the big budget flicks and you’ll find 2016 has actually been a pretty excellent year for film. To find the best films though, you’ll need to start looking at the mid to low budget end of the spectrum. Smaller studio fare and independent films have had a great year, with films like High Rise, Green Room, The Shallows, The Nice Guys, and Deadpool all achieving critical success. Hell or High Water, the latest film to join this growing list is perhaps the best of the bunch.

Directed by David Mackenzie (Starred Up) and scripted by Taylor Sheridan (best know for writing Sicario and, weirdly, playing Sheriff Hale on Sons of Anarchy), Hell or High Water is a taught and violent neo-western full of heart and exceptionally well written characters. Chris Pine and Ben Foster play Toby and Tanner Howard, brothers brought together to make a better life for the future Howard’s. Pine’s Toby is a divorced dad of two who after his mother dies is left with the family farm, which recently struck oil, and unlike his brother has lived his life on the right side of the law. Pine is awesome in this, perfectly embodying the struggles of a man forced into doing something dangerous for the sake of his family. His performance is a million miles away from his (also great) performance as James T. Kirk and hopefully it opens doors to other serious dramatic roles. Ben Foster’s Tanner is the younger and much more violent brother who’s lived a quarter of his life in prison. The supremely underrated and always awesome Foster is once again fantastic in this. His character is a violent product of the system, who has been forced to live through some terrible things, but he also loves and would do anything for his older brother, a duality Foster plays perfectly. The brothers’ plan to wrestle control of the family farm back from the hands of the banks is to attempt a series of small scale bank robberies over the course of a week and then pay off the bank before they foreclose on the farm, leaving the farm and the goldmine of an oil reserve to Toby’s kids. Despite the robberies being deliberately careful and well planned (mainly by the level headed Toby) Tanner’s violent streak threatens to capsize the whole thing. As well as this the bothers are being pursued by an ageing Texas Ranger (Jeff Bridges) looking for one last adventure to stave off the upcoming years of boredom once he retires. As per usual Bridges is terrific, with his character Marcus being the best character in a film of best characters. His fear of retirement, of the banal life that awaits him, is incredibly real and his constant bickering and gentle mocking of his partner Alberto (Gil Birmingham) is at once funny and sad as it masks his pain of being forced out of the Rangers. 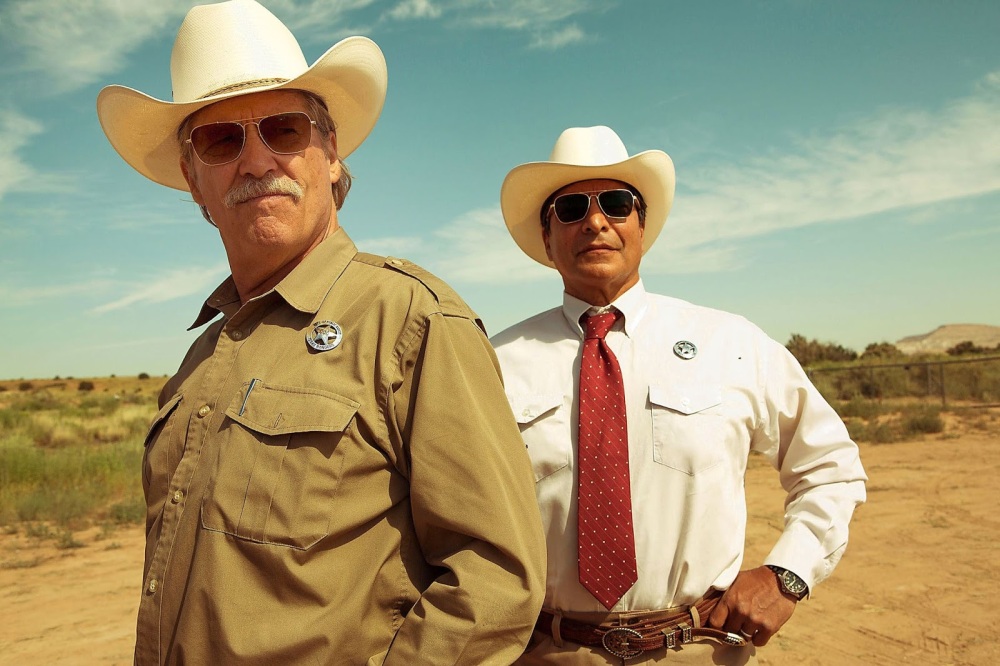 The story is perhaps a little heavy handed with it’s hatred of the banks but it’s not for a minute untrue, and the characters motivations are always believable. Sheridan’s excellent script is also very funny, meaning Hell or High Water is no where near as bleak as his last effort, the brilliant Sicario. The pairings of Pine/Foster and Bridges/Birmingham are all fantastic and they both have great chemistry. When it comes to these characters being in life and death situations you genuinely care for each of them, and when they come face to face you are left in the confusing place of rooting for both sides, although you have the feeling at least one person isn’t going to make it out whole. The direction is also frequently stunning, employing an enjoyably relaxed pace right up until a burst of ultra-violence shatters it. Through MacKenzie’s direction the world these character inhabit is shown to be a desolate wasteland with people struggling to survive in the shadow of the banks. In this world people idolise the bank robbing anti heroes and they still have to fight against the pull of nature. In this sense the landscape of West Texas makes Hell or High Water as much a traditional western as it is a contemporary one like No Country For Old Men. Nick Cave and Warren Ellis’ score to Hell or High Water is also brilliant, with it managing to add to the emotion in a scene without being big and over the top, similarly to their work on the John Hillcoat western The Proposition.

The bottom line: Hell or High Water is one of the best films of the year. Everyone in it turns in what are almost certainly up there with the strongest performances of their careers, and that’s no small feat when you have a catalogue of acting credits like Jeff Bridges. It’s closet comparison is probably the Coen Brothers masterpiece No Country For Old Men, but even then it’s entirely it’s own thing. It’s definitely a must watch; it’s funny, thrilling, heartbreaking and unfortunately probably going to slip under the radar of most people.