This will all be over soon, gentlemen

Never have I been to the cinema and heard the same gasps that I heard during Green Room. We’re British, that’s not what we do. We leave the clapping during the credits and hollering at the screen to our friends across the pond. But during certain scenes in Green Room the audience (including myself) forgot cinema going etiquette and jumped out of their seats, gasped and swore. And when you see the film, you can’t really blame them.

Green Room is directed by Jeremy Saulnier who directed 2013’s Blue Ruin. If you’ve seen that you know what you’re getting yourself in for. It’s violent and grim but with a jet black sense of humour running throughout. The spurts of gory action are surprising and realistic, with people getting chewed up, shot, stabbed, beaten, cut open and their limbs (almost) severed. I say this a lot, but I’ve never meant it more than with Green Room; it’s really not for the faint hearted. At the first sign of gore in our showing, a few people stood up and walked right out. As much as you hear of this happening, I’d never seen it!

Our “heroes” of the film are the Ain’t Right’s, an edgy punk rock band. From the outset you get this feeling that they are trying really hard to fit in with this subculture, talking about obscure bands, eschewing social media because music is all about the moment. As the film goes on it becomes apparent that perhaps they aren’t as hardcore as they first thought they were. The group is made up of a group of very likable actors, Anton Yelchin (Star Trek) is Pat,  Alia Shawkat (Maeby from Arrested Devoplment) is Sam and Joe Cole (John, one of the Shelby brothers in Peaky Blinders) is hothead Reece. The whole group is great, and lots of fun to be around. Which is why it’s a difficult watch when they start getting torn to pieces.

To get themselves out of a difficult situation they decide to do a last minute gig for a crowd made up of “boots and braces” types. Advised to play only their older, heavier material they venture into skinhead country. Straight away you know these guys are Nazi’s, but the film doesn’t rub your face in it. It shows all it needs to show and lets you make your own mind up. Saulnier knows we’re not idiots and he doesn’t waste time. The band witnesses something that they really shouldn’t have and they are then trapped, surrounded on every side. The main character in the enemy camp is Gabe, played by the extraordinary Macon Blair (the leading man in Blue Ruin). Blair gives Gabe this sympathetic appeal, with his sad eyes and soft voice. This is a guy who is as equally cut out for this hardcore world as the band. This is a guy who’d been waiting years to get his red laces, but now is wondering if he even wants them. I can’t stress enough how fantastic he is in this.

I can’t review the film without of course mentioning what is perhaps the selling point of the film, or at the very least the reason it’s had a lot of exposure. Patrick Stewart plays the leader of the group, the head neo-Nazi. Like Gabe (and unlike the rest of the troupe) Patrick Stewart is soft spoken but in a much more menacing way. As he reassures the group through the locked door to the titular green room, the evil and the slyness is hidden in his voice. He is a force to be reckoned with in this film and is perhaps even scarier than the Nazi’s with their machetes and attack dogs all put together. 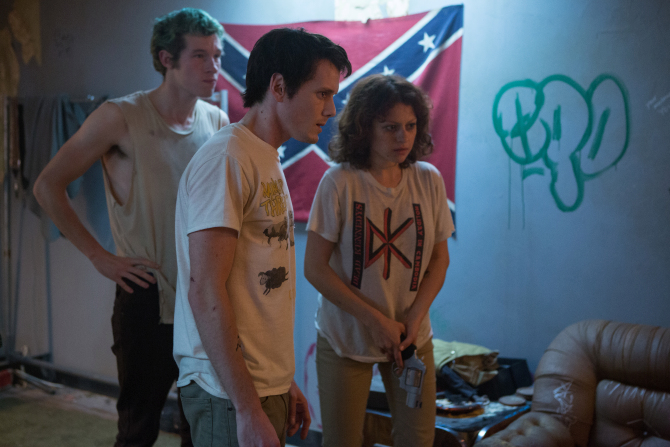 It’s a simple set up but it doesn’t need to be any more complicated. There is a backstory there around the crime that they witness but it’s simple and left up to the audience, not everything is spelt out. It’s a film of acute focus, it knows what it is and it knows exactly what it needs to do to entertain and surprise you. It’s surprisingly beautiful in a lot of shots too, something you might not expect from a film set in one of the grimiest bars ever. Once it gets moving it doesn’t let up and when the credits start you’ll be happy to breathe again.

Green Room is a brutal, thrilling update on siege films like Assault on Precinct 13, with some black humour and pathos mixed in for good measure. If you can handle the gore I’d wholeheartedly recommend it. It’s the most brutal, thrilling film I’ve ever seen and definitely one of the best this year. It’s a lot of fun too, even if you do feel a little guilty for enjoying it so much. Definitely check it out.

One thought on “Green Room Review”