The Shallows is exactly the type of summer film that needs to be made more often. It’s a cheesy B-movie through and through but it’s solidly crafted and expertly executed. Director Jaume Collet-Serra and star Blake Lively are on top form, both bringing their A game to a film that some would probably deem not worth it. But it’s good that they did, as the The Shallows ends up being closer to the Jaws end of the human vs nature film genre scale, rather than the  Deep Blue Sea end.

Collet-Serra once again shows he’s the go to guy for better than expected B-movies. Like his previous film, the fantastically stupid/brilliant Non-Stop, The Shallows is directed extremely well. He perfectly creates dichotomy with the mysteriously unnamed beach location being both a paradise and a hell. The film frequently looks more like picturesque art house film rather than a b-movie. For a film about a killer shark it’s awfully pretty at times. But the film is still a genre film, a thriller, and films like this live or die by the tension they create. Collet-Serra manages it expertly with well timed jump scares and also his use of overlaying technology screens onto the film. For example, there’s a scene where Nancy (Lively) realises she’s got 30 seconds to get back to safety before the shark gets to her. She times this on her watch and then, instead of cutting back to static shots of the watch, Collet-Serra overlays the watch face onto the screen. It might sound naff but think of the text messages in Non-Stop and you’ll get the idea. We watch every agonising second as Nancy scrambles to safety, the lack of cutaways increasing the tension. The film is frequently daft and cheesy too, but Collet-Serra knows what type of films he makes. Like Non-Stop, The Shallows sticks with it premise and treats both the believable and the ridiculous aspects with an equal amount of earnestness. 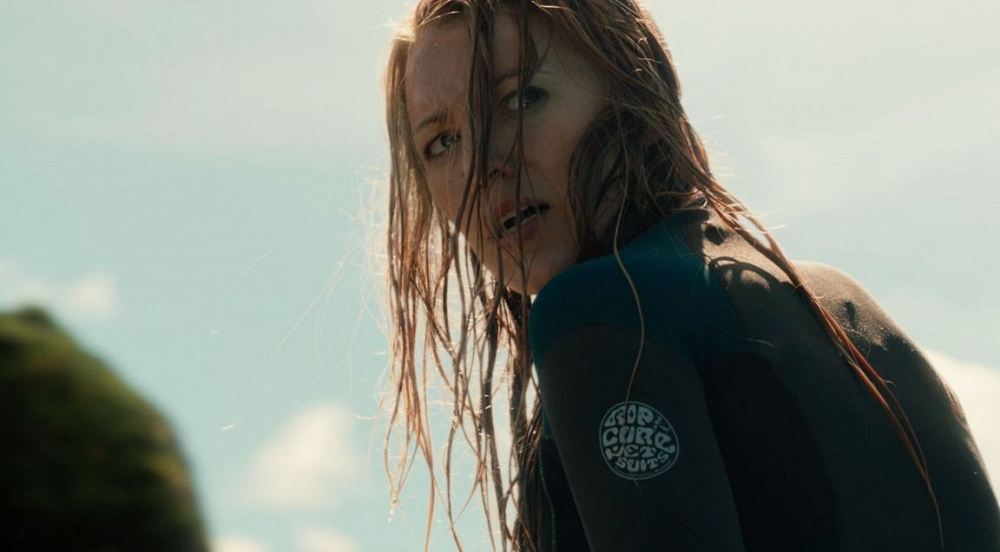 Films like The Shallows would collapse though, if it wasn’t for a compelling main character. The Shallows has one in Blake Lively, who holds the entire film together with her sometimes vulnerable but mostly bad-ass performance. Lively plays Nancy, a recent med-school drop out on the hunt for a secret beach visited by her late mother. Her grief for her mother plagues her (like the shark trying to kill her – the parallels continue to be not-so-subtle) and she escapes to the beach, in Mexico, against the advice of her father. A couple of other actors are in the film but at least 90% of it has Lively alone (well, not completely alone). Despite having no way of escape, as well as being seriously injured early on, she’s not a typical damsel in distress and she soon sets about saving herself. Lively is great here, turning in an enjoyably bad-ass and engaging performance, reminiscent of early Sigourney Weaver or Linda Hamilton.

The film does take a few cues from Jaws, but that’s a given with it being the quintessentional shark attack movie. The shark POV shots and the building music are both present but they’re used well. The Shallows is made up of a few familiar elements but it’s better than the sum of its parts. The limited story outside the main shark attack is also good, mainly through Lively’s performance, and the shark arguably representing Nacy’s grief over her mother is an inspired touch. There’s nothing new here but it all done so well that you don’t mind. Even when the film jumps the shark (ha) slightly with the sudden appearance of a horde of luminous jelly fish you don’t mind, because Lively and Collet-Sera sell it. There are a few problems; it wouldn’t have hurt to have her on the rock for a little longer, show us just how desperate Nacy is by the third act. And the ending, while admittedly well earned, is overly perfect to a fault. So much so that the theory that the last section of the film is purely a dream had by a dying Nancy becomes very convincing.

The bottom line: The Shallows is a very enjoyable movie with a star turn from Blake Lively. It’s perfect summer fare; not too taxing with the perfect amount of thrills. It’s a lean film (clocking in at under an hour an a half) and is solidly crafted by Collet-Serra. It’s a bit silly at times but Lively sells it and you’ll be having so much fun you won’t notice anyway.