Lovers in a Dangerous Spacetime is delightful. On the surface it’s about a cute bunch of astro-warriors saving the galaxy and restoring love. Underneath it’s a hectic and stressful experience where only the best of friends will survive.

The story goes that anti-love is taking over the galaxy and you and your closest friends must destroy it with a kickass prototype neon space ship and plenty of love. The good news is it’s the sort of love that involves shooting bad guys in the face with the biggest guns possible. You’re going to want to invite some people round for this one. It’s only couch co-op which isn’t really a problem, it really suits the feel of the game and the focus on friendship. It’s also not as fun alone, so talk at least one friend into joining you.

The good news is that the gameplay is extremely simple, so anyone can pick it up very quickly. You all man a station on the spaceship. You have turrets, a pilot, shields and extra’s like  a giant gun that must recharge and a map. The kicker is that there are more stations than there are players! Though even if you’re alone, AI companions will help out (but they can’t drive for you!) 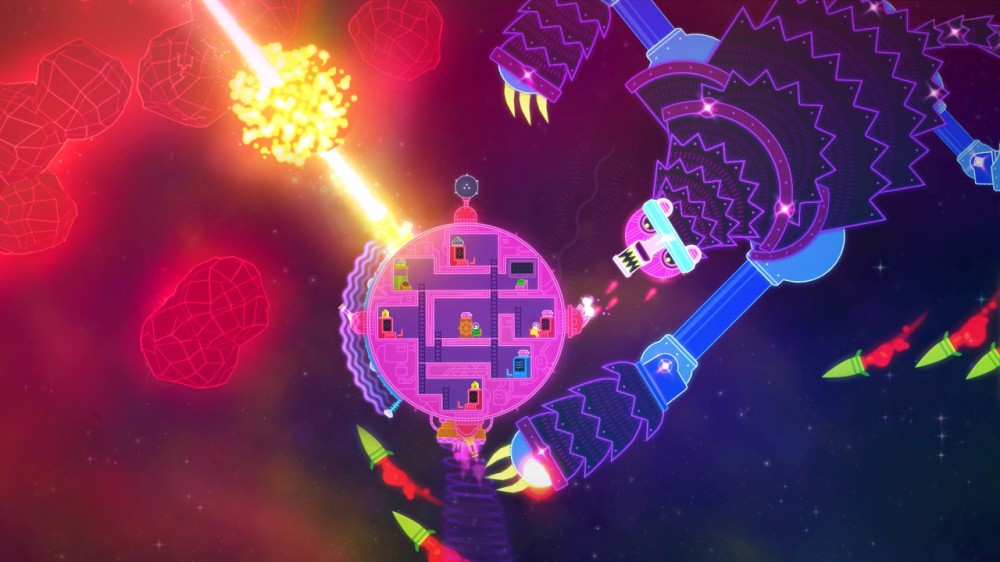 Underneath this simple idea is a surprising amount of depth. You will find gems to upgrade the stations on your ship. Each gem does a different thing, one turns the turret into a giant flail, another turns the shield into a battering ram etc. As you go on you can upgrade your ship so each station can have more than one gem. This is where things get crazy, trying to work out the combinations of each gem. For example two yellow gems turn a turret into a double railgun, a yellow and a blue turn a turret into a laser flail. We’ve still not seen them all and there’s a cool element of surprise every time you pick one up.

The look and sound of the game is exceptional. The music is great with loads of electro-tinged tracks. And the neon bright colour scheme and art direction is beautiful. The bosses are interesting and well designed, and there’s a huge variety of enemies that means you have to change up your tactics from battle to battle.

Once you see past the adorable aesthetic, there’s a tough-as-nails game underneath. But it’s one with a whole lot of personality and style. It rewards camaraderie so grab as many friends as you can round up, or some strangers off the street (don’t actually do that). War will bring you and your buddies together.

Available on Xbox One, Playstation 4, Steam