The first film left us on a cliffhanger, with Alice waking up in a destroyed Raccoon City and the only other survivor, Matt, being carted off to the suspicious sounding ‘Nemesis’ program. The first film was surprising, low budget fun. With bigger production values and new characters, how does Resident Evil: Apocalypse compare?

It picks up where the first Resident Evil left off, in fact it has a recap over the events of the first film. Whatever you think of these films you have to respect their commitment to building some kind of canon and continuity. We soon meet one of the film’s new characters, Jill Valentine (a great character in the games). She’s a maverick cop who doesn’t play by the rues etc etc. But despite the cliche exterior she is very cool, and gets a lot of kickass moments. She doesn’t feel like an insult to the games, she feels like she’s been taken right out of them. And it is nice to see one of the biggest characters from the game have a starring role here. Another cool new character is Oded Fehr’s Carlos (a lesser known character from the game series). His entrance might be the best scene in the film, it see’s Carlos jumping out of a helicopter firing both guns at once, killing zombies. It’s the sort of ridiculousness you love to see in films like this.

A not so good new character is L.J. who, in one of his first scenes, runs down a zombie in the road and yells “GTA MOTHERFUCKER!” It’s not great, but even he has a few decent moments by the end of the film. It’s just if this is one of the first things we see of a character, it tends to stick with you. On a similar note Jared Harris looks pretty uncomfortable throughout all of his scenes as the wheelchair-bound Dr. Ashford. I’m not sure what film he signed on to make but he doesn’t seem too bothered about this one. Iain Glen also shows up, but not nearly for long enough. Especially for fans of Jorah.

The villain of this film is a lot better than the first one. In this we have the famous Nemesis from the games, he even does his famous “STARS!” line. The film makes it clear quickly that the nemesis is very close to being indestructible by having him be shot about a thousand times and then take out an entire S.T.A.R.S platoon. He’s a good threat, especially for a heroine that can now do pretty much anything (more on that in a moment). He looks like he does in the game and the film knows how to use him, having him bust through walls and blow people up at the right times. I also like that the Nemesis is Matt from the first film, and that in the climatic scene they actually use this and have Alice not want to hurt him. As I said at the beginning, you have to respect the canon this series is trying to build.

Something that has changed drastically between films is Alice. She now has some kind of roughly-defined superpowers. She can now do flips and kicks and jump from motorbikes without getting hurt. Also she now feels less human because of what they’e done to her. This is a completely different Alice and Milla Jovovich plays her very differently. She’s now cold and uncaring, telling one bitten survivor that he is going to die. She stays like this up until the end,and it’s only in the climatic moments against the Nemesis that we see the real Alice. As fun as it is seeing her kill zombies and be all cool and badass, I hope we see more of the three dimensional Alice in the sequels. 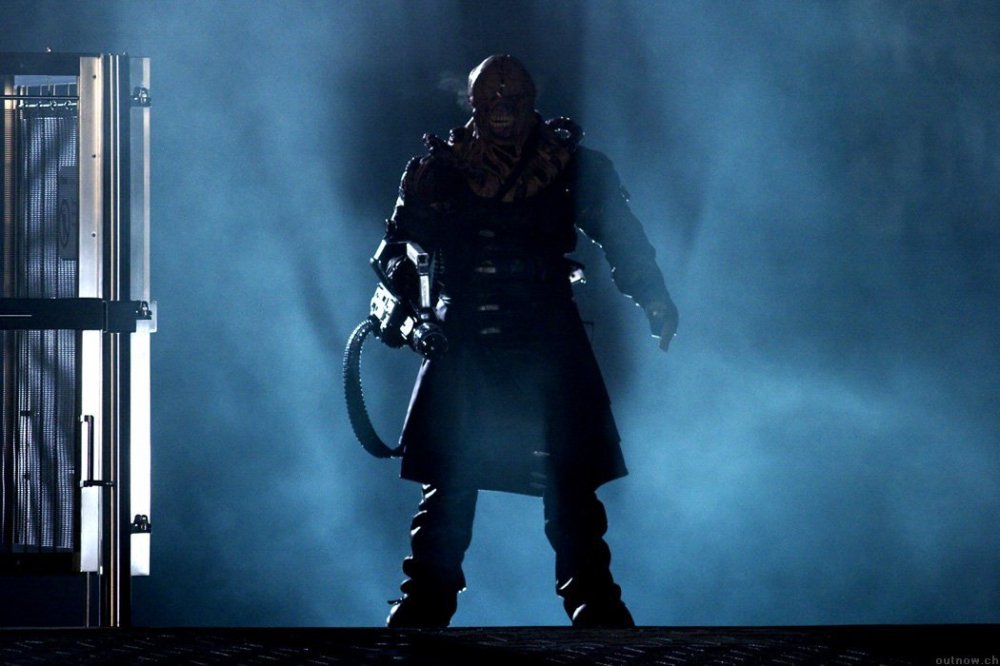 The action is awesome for the most part. Some scenes of hand to hand combat are overly edited to the point where you can’t see what’s happening, and when you can see it looks silly. But the shootouts against the undead are great, and the bullets and explosions feel punchy enough. The zombie make-up deserves a shout out because there are some effects and prosthetics here equal to The Walking Dead.

The last 10 minutes of the film let it down a bit. Just as you think it’s over BAM Alice is waking up naked and confused somewhere again. That’s the third time now, for anyone counting. These final scenes are setup for the sequel and serve as a good way to introduce Iain Glen. We’ll have to see next week if these scenes set up anything worthwhile.

I think this film is an improvement on the first Resident Evil. The story is more fleshed out and the action is bigger and better. Though the more complex story is leading to an ever more convoluted world, but I’m interested to see where it goes. Some things in it are outright bad (looking at you L.J.) but the majority of it is campy fun. I’m watching it with my brothers and that’s the ideal way to do it. Find some likeminded people and give it a go, there are more good bits than you’d think and the bad bits are usually lots of fun to watch too.