Based on true events, The Two Popes follows the meeting of Pope Benedict XVI (Anthony Hopkins) and the future Pope Francis (Jonathan Pryce), two men with wildly different interpretations of the Catholic faith and very separate ideas of how the church should adapt to the ever-changing modern world. Though it is based on true events, these sort of events in the Catholic church are so secretive and hush hush that there is inevitably an element of fiction here – but where the fiction begins and the truth ends is up for debate. Somewhere between drama and comedy, The Two Popes primarily deals with two extended scenes of conversation, but don’t let that fool you. It’s an enormously entertaining film. 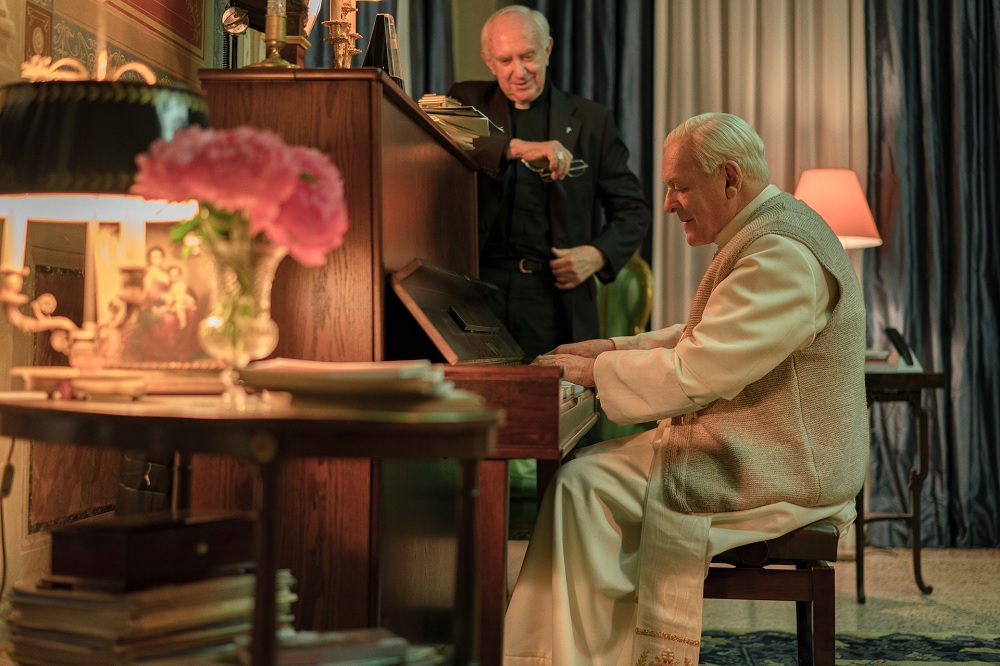 Jack says: The film is neither a recruitment ad for the Catholic religion nor a snarky takedown. It’s a look at the two warring sides of the church that came to a boiling point a few years ago in the wake of scandal after scandal. The two Popes of the title embody these opposing viewpoints. Tradition vs change. Conservative vs liberal. And it’s the two performances at the centre which sell this struggle.

Hopkins’ Pope Benedict represents the old way, the excess and gold-rimmed side of the church. It’s a testament to the subtlety of the script and Hopkins’ performance that they don’t make him some over-the-top villain (because based on the real man’s views that would have been all too easy). He’s not the “bad” side of the church, he’s simply outdated. It takes a lot to admit that, and Hopkins plays the Pope as an old man, stuck in his ways at first but willing to do what’s best for the future of the church, even coming around to a few of the ideas by the end.

Representing this new, liberal take on the religion is Pryce as Cardinal Jorge Mario Bergoglio – the next pope, even if he doesn’t want the job. He starts the film as this perfect religious figure, but in some really fantastically shot flashbacks we discover that he’s not the Saint (haha) that he first appears, or at least that’s what he feels. It’s all a lot more complicated than that. But his shunning of some of the crazier Catholic traditions, his (more) modern views, and his genuine willingness to help people that Pryce presents here make it clear why the current Pope has become so very popular with a lot of different people.

We were a little concerned about a film being over two-hours long and seemingly being entirely conversation. But it’s so much more than that. It’s a beautiful, smart, surprisingly funny film. A scene towards the end in which Pryce encourages Hopkins to dance a clumsy tango with him is possibly the most touching scene of the last year. Another standout moment sees the two Popes bonding over takeaway pizza and Fanta. Ultimately, the film shows how these mythic figures are a little more human than you might expect.

Becca says: I was largely uninterested in world events at the time that this film focuses on, so I could go in without a clue what to expect. I’m not religious myself, and I felt that the film addressed the issue in a solid, unbiased way. I was most impressed by a particular scene where Pryce and Hopkins first go head-to-head about their difference of opinion on how the church should conduct itself. The writing here was on point and the tension was beautifully built.

I would describe this film as a touching drama – not quite “feel-good” but not as intense as, say, Frost/Nixon. I suppose it could be a little dialogue-heavy for some and too light handed for others, but the writing kept me hooked, which is all I can really ask of a story.

I wonder if the real Pope has seen this, and what his thoughts might be? I suppose, as all films do, it embellishes certain aspects to make it a good romp, but it felt like the writer tried to build upon the known facts and avoid over-speculation. For example, there was a clever part where the two popes were having a conversation that in real life we must know happened, but don’t know what was said. In the film, one pope leans to another and their voices turn to a mumble. We see a few reactions – perhaps the writers/director hinting at what they think was being said – but it largely lets the audience come to their own conclusions, which I think is fair.

This one is up for the Oscars, but I’m not convinced it could stand up against some of the other entries this year – films such as Marriage Story just packed a harder punch, writing and acting-wise. However, this film definitely deserves some recognition and it isn’t one to pass up. I’d sure be up for more historic insights like this – might teach me a thing or two!