What an episode! The return of the Judoon ended up being the least of this episode’s surprises. Captain Jack is back and better than ever, there’s something going on with a cyberman, the Timelords have made a return, and most importantly, there’s a new Doctor. It’s this last one that’s bound to upset the most fans, but I thought it was brilliant. Let’s take a look at the episode.

The episode begins by following Ruth (Jo Martin) an ordinary woman who lives in Gloucester and works as a tour guide. The whole thing feels very quaint, very safe. It’s the sort of thing you’ve seen in Doctor Who countless times; so-called “normal” people going about their business, talking to each other in bizarrely not-normal ways, until something alien comes along and disturbs the status quo. In this case, it’s everyone’s favourite trigger-happy space rhinos; the Judoon. They’re after a fugitive, who just so happens to be Ruth’s husband. It’s not long before they’re zapping hapless baristas and disintegrating old ladies. 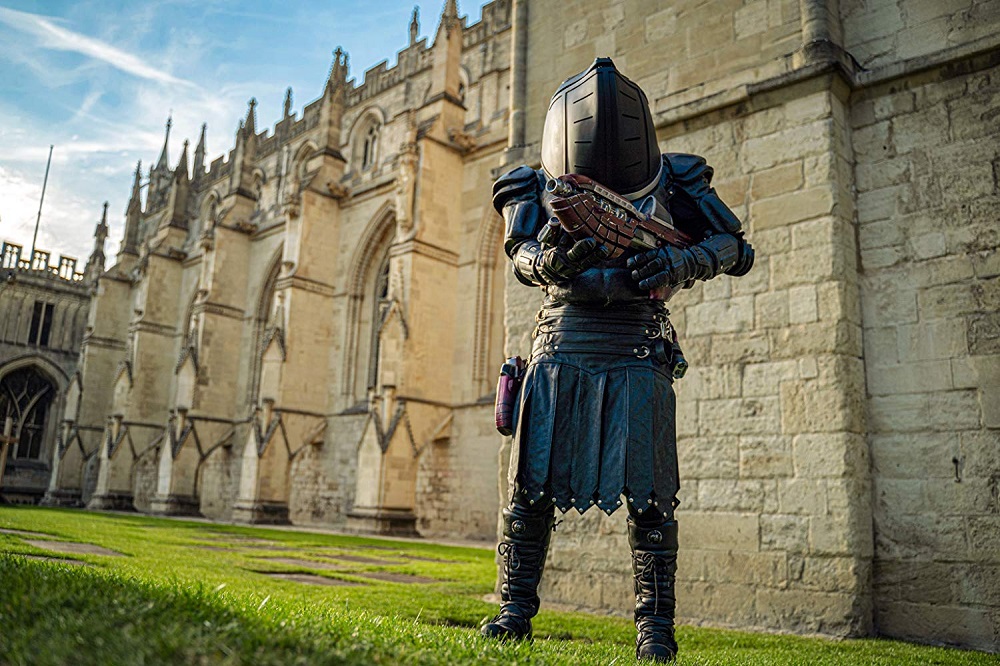 Now I want to state that I was unaware of the twists in this episode – any of them. I’d read that there had been leaks, but for once in my life actually managed to avoid them. So what happened next came as a whopping great surprise. After The Doctor makes an appearance and whisks Ruth away, it becomes clear that she’s not who she thinks she is. She doesn’t remember things quite right and starts breaking out some serious John Wick moves that even she didn’t know she had. I mentioned to my partner at this point that maybe she’d voluntarily wiped her mind using the chameleon thingy that the Tenth Doctor used in Human Nature/Family of Blood – which turned out to be the case. But not only that, Ruth is The Doctor. Like, the actual Doctor. Not The Doctor in the same way David Morrissey was, think more John Hurt as The War Doctor.

I think Jo Martin makes a killer Doctor. The shirt, the glasses, and the attitude – she’s cocky and brash, playing off Jodie Whittaker’s kinder Doc in a really fun way. Also, I love the idea that there are old dinosaurs out there who shat themselves at the sight of a woman as The Doctor who will be rioting now that there’s two – and one of them is black, which is a historic moment all on its own. The Daily Mail must be seething. And I’m sure we’ll all hear L*urence F*x’s opinion in due course. But Martin just brings an incredible and original energy to the role, something that’s pretty tricky now that the character has been played by over a dozen actors. What this all means for the series is a whole different kettle of fish. Will she be a pre-Hartnell incarnation? Something that the fanbase is already primed to reject. I don’t really care in that regard. But whatever they do, they need to make sure she matters in the grand scheme of things. 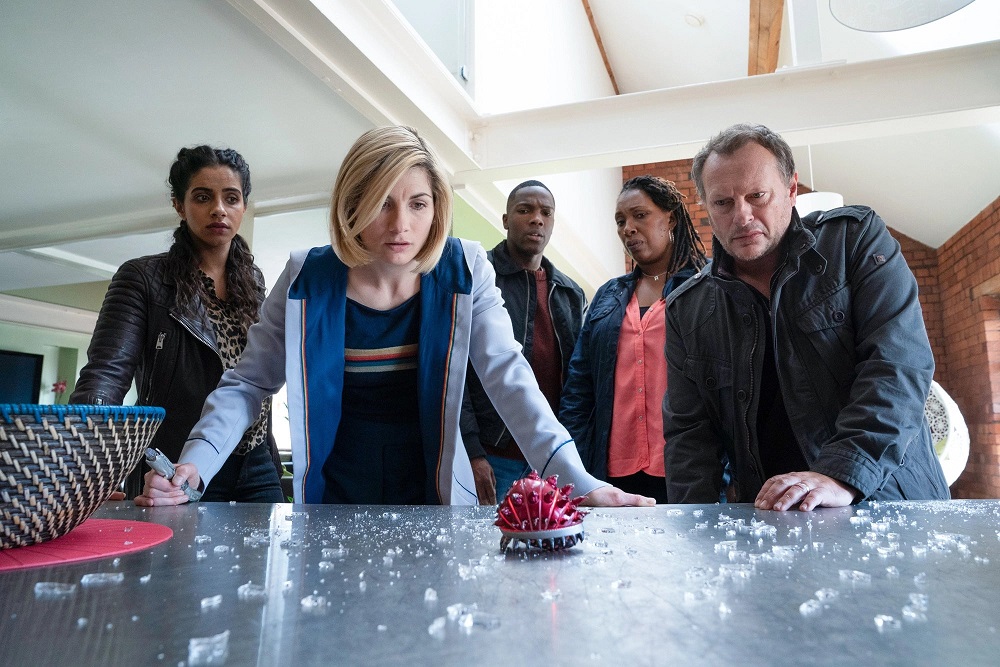 Now, in any other episode, the appearance of a new Doctor would be the best moment of the series so far – especially one as cool as Jo Martin’s 60’s-esque incarnation. But she’s got competition for most jaw-dropping moment. Earlier in the episode, Graham is zapped away when he gets separated from the rest of the group. He awakens aboard a ship, and there’s a voice talking to him. The voice is a cheesy, American voice, sounding like some kind of interstellar showman. I’ll admit that even here I didn’t guess what was coming. It just seems so unlikely. But right there, before Graham’s and our own eyes, materializes Captain Jack Harkness (played by the brilliant John Barrowman). I suppose it never felt like a possibility because Captain Jack always felt like a character from a very different era of Doctor Who – namely the sly, winking era of Russell T. Davies. He wouldn’t fit in with Chibs’ take on the series, would he?

Well, so far, he fits in like he never left. I was grinning ear to ear as he first flirted with Graham (the “silver fox”) and then with Ryan and Yaz when he mistakenly zaps them up to the ship too. It’s clear that Barrowman has lost none of the love for the role and if it wasn’t for the special effects and appearance of Bradley Walsh, it’d be easy to mistake these scenes as something straight from 2006. But he’s not just here to risk allegations of sexual assault; he has a message for The Doctor. And it concerns another one of her old friends. Before disappearing, he tells the gang to warn The Doc about “the lone cyberman”. And though it’s sad we don’t see Jack meet with the new Doctor, I’m intrigued at what they’re setting up. Between this and The Master, I’m over the moon that these full-season arcs have made a return. Now just give me some fake websites and clues to search for, à la “Bad Wolf”. 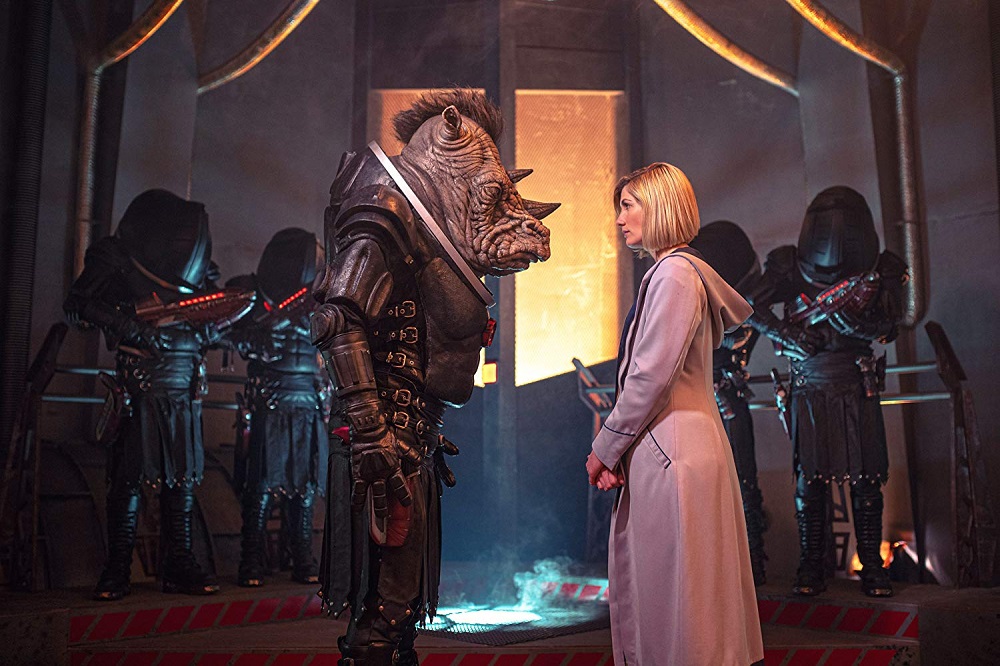 So the episode leaves The Doc in a mess. On one hand, she is happy to hear about the return of her old friend, on the other she’s confused about meeting her past/future/alternate self – who’s jetted off into space. On top of that, Gallifrey may or may not be alive and well in some form, despite what she’s seen. At the very least, her people are back. So she’s understandably cranky, and is perhaps being unfair to her companions. But it’s this conflict that makes her an interesting character. It’s all well and good having her run into a situation and fix it – but it’s far more compelling seeing her out of her depth, without answers.

It’s at odds with the previous season to leave so much hanging at the end of an episode. But it’s a dynamite way to make sure people tune in again next week. Chibnall hasn’t just played his hand; he’s thrown the entire deck up in the air. Now he just needs to give us a satisfying explanation for all of this – as well as a conclusion. I wouldn’t want to be in Doctor Who writer’s room.