Well that’s it. After over a decade, and 22 films, this chapter of the Marvel Cinematic Universe has come to an end. It’s been a wild ride. When this film starts, there are still quite a lot of dangling plot threads to tie up too – not to mention half of the characters dead from Infinity War. Which kind of explains why Avengers: Endgame is three hours long.

It jumps right into things, with Tony being rescued from his sad space fate by Captain Marvel (following on from her after-credits scene in Captain Marvel). Soon, the gang (or what’s left of them) decide to blast into space, get Thanos and the stones, and reverse what he did. They get there easily, and with little resistance. Then they discover that Thanos has already destroyed the stones and it’s too late. Thor cuts his head off, it fades to black, a message appears saying “Five Years Later”. So it’s a pretty bleak way to begin. The trailers had built this up as the plot – the original Avengers getting the stones back. But it becomes clear very quickly that it will not be that easy. And I for one appreciate the effort Marvel went to hiding some of these plot points. More than any other film in the MCU, there are twists, turns, surprises, and cameos that you really don’t want spoiled. 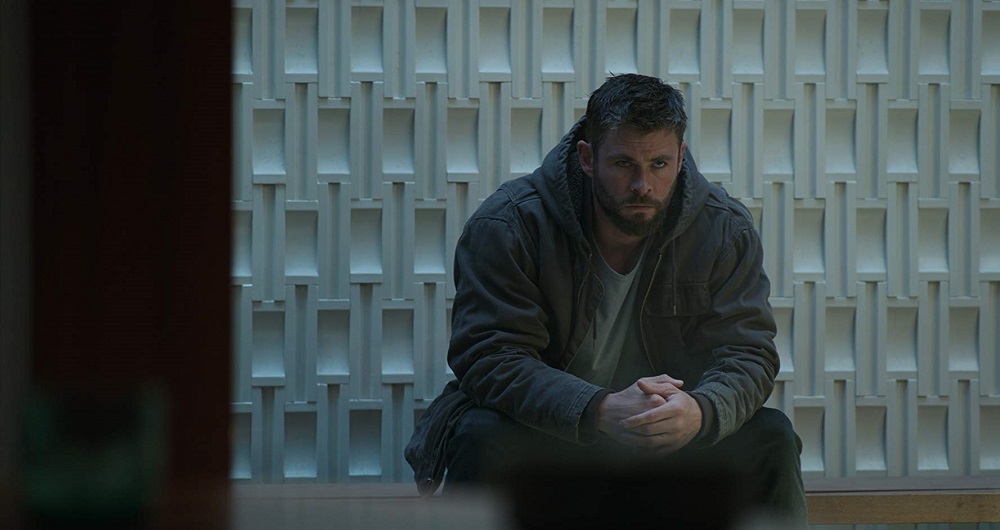 What follows from here is a mad, complicated, time travel epic. After the time skip, Scott Lang is awoken and freed from the Quantum Realm. He realises the power of this realm, and the potential time travel capabilities (which were hinted at in Ant Man and the Wasp). Soon, the gang is back together. But everyone is, understandably, in a very different place from where we last saw them. Cap is dishing out coping strategies at grief counselling sessions, Nat is manning the Avengers HQ alone, Thor has got fat and drunk, Tony has a family, Banner has managed to merge himself and the Hulk, and the rest of the team is spread across the world. The most devastating change is poor Hawkeye. When the film opens, we see him and his family together and happy. Then the snap happens and he loses everyone. From there, by way of an excellent katana fight in rain-drenched Tokyo, he has become a vigilante – killing anyone he deems unworthy of not surviving the snap.

So the characters are different, skewed versions of their former selves. But to it’s credit, the movie sticks with it. The characters aren’t fixed when they all come back together. Hawkeye is a killer, Thor stays fat and drunk (an easy cosplay too), and there’s a melancholic air hanging over everyone for the first act. But they figure out a plan – to go back in time and get the infinity stones. And this is the set-up for one of the craziest second acts I’ve ever seen, as the Avengers go back to their previous films, their ‘greatest hits’, and start getting up to all sorts of time travel craziness. And this is where being a Marvel fan for so long really pays off.

Thor and Rocket go back to Asgard to get the reality stone from Jane (Natalie Portman). This leads to a really nice scene as he sees his mum again, right before she died. It’s perfect for his character, and gets him out of the rut he’s in post-timeskip. It also gives him some nice dialogue with Rocket. Also, it’s just great seeing Asgard again! Elsewhere, Rhodey and Nebula are getting the power stone from the tomb where Starlord found it in the first Guardians film. This leads a moment of classic time travel comedy, as we see Quill dancing to Redbone’s ‘Come and Get Your Love’, but from Rhodey and Nebula’s hiding place behind a rock. But things go awry, and get more complicated, when past-Thanos and past-Nebula discover them. This also includes Gamora, but from before Guardians 1. So a good knowledge of the series is essential if you’re going to follow along.

Hulk, Cap, and Iron Man end up in New York in 2012, during Loki’s attack. They’re trying to get the time stone, the mind stone, and the space stone as they all happened to be in New York in this time period. This scene leads to cameos galore, as old SHEILD/HYDRA agents pop up to complicate things. There is a stand-out scene where present-Cap fights past-Cap, with some great CG and a few overdue jokes about the old costume. It’s the sort of time travel that really stresses me out, trying to imagine the characters (not to mention the Russos) keeping it all straight in their heads. It’s Back to the Future-esque, reminding me of when Marty had to sneak back into the school without getting discovered in the second film (though Banner makes it clear that it’s most definitely not like that film).

Things go wrong and Cap and Iron Man end up going back to the 70s for the Tesseract and some more Pym particles. This scene is one of the absolute best in the film, and offers some final touches of character development for our two leads. Cap catches a glimpse of Peggy, the love of his life, which really informs the decision he makes at the end. Tony bumps into his father and shares a few really touching tips about fatherhood. It ties back to Tony’s feelings for his father, something which has influenced almost every choice he’s made in the MCU. And something which informs the decision he makes at the very end.

The final bit of time-hopping is down to Hawkeye and Black Widow, as they travel back for the soul stone. Obviously, as fans we know that there is really only one way to get the soul stone. But that doesn’t make it any less effective. The two of them have a fight, trying to decide which one will make the ultimate sacrifice. In the end it’s Natasha, who take the plunge to get the stone – all accompanied by Alan Silvestri’s absolutely haunting score. This was a standout scene in Infinity War so doing it again was always going to be risky – would it have the same impact? But I reckon the Russo brothers handled it perfectly, thanks to some top-tier performances from Jeremy Renner and Scarlett Johansson.

After getting all of the stones, you may glance at your watch and realise that there’s over an hour left! But it doesn’t feel like that. It never drags. Maybe that’s because I just love these characters, or maybe it was because I was too busy concentrating on the next easter egg or fan-service moment (a rewatch might be in order). But the third act is almost entirely a battle sequence, as the Avengers manage to build their own gauntlet, snap their friends back, and take on Thanos. In terms of sheer size and spectacle, I’m not sure I’ve ever seen a battle scene handled so well. It rivals (and perhaps beats) anything in the LOTR franchise, which really is the benchmark. Everyone gets something to do. But more than that, it feels like everyone matters. Every fight feels important. It’s also such a huge, cheering moment to see all our favourite characters come back and wallop Thanos, including one phenomenal scene of pure girl power that is likely to trigger a few incels.

Speaking of huge moments, it’s the three main Avengers (Cap, Iron Man, Thor) who take on the big purple raisin man himself. And what a great fight it is! The highlight is definitely Cap picking up and wielding Mjolnir, something which has been teased for years. But it can’t all be cheering and clapping, Thanos soon gets his hands on the stones again, leading Iron Man to bravely sacrifice himself as he wields the destructive powers of the stones to save the day. We all knew this death was coming, RDJ has been around since day one and if someone was going to die, it’d probably be him (though I had my money on Cap). But he goes out in what is sure to become one of the series’ most iconic moments (“I am Iron Man.”). And he leaves the world in a odd state. Everyone is back, but the current world also didn’t change. Which means the past five years of hell and mourning and moving on still happened. People have new families, new lives. And their long-dead relatives just reappear, the same age they were five years earlier. I struggle to see how they’re going to manage this in the future, but I trust Marvel (you really have to by this point).

And right at the end, just when your tears are dry, Cap goes and does something crazy. In the course of returning the stones, he goes back to the 40s and stays there, growing old and meeting Falcon and Bucky as an nonagenarian. Now this raises some major questions about the time travel mechanics, which characters have stressed the complications around. But I won’t go on about that now. It’s a very sweet scene, as Steve Rogers finally gets that dance with Peggy Carter. To have his time in the MCU come to a close and him NOT die was the real twist. It’s nice to see a happy ending for once. And Cap has always been my favourite, so I can live with a few potential plot holes.

Overall, the film is maybe a little bloated (like this review) but it’s full of action and some genuine laughs. It manages to spin dozens of plates without dropping a single one. I’ve never seen such a mammoth story wrapped up in such a satisfying way. I’ve also never felt so proud being a huge Marvel fan. Obsessing over these films and characters for two decades felt worth it, as the fan moments and details are insane in this film. And ultimately, it was a personal story for the two leads. Sure, every character made an appearance, but not as much as the trailers suggest. (Captain Marvel is barely in it – though I am digging the new haircut). No, this is both a sequel and ending to the stories of Iron Man and Captain America. As an ending, it’s absolute perfection. And I don’t think of the two of them could have had a finer send off.