“Threats and dreams, dreams and threats.”

After last weeks fantastic episode, The Walking Dead takes a bit of a breather this episode. There aren’t any massive set-piece moments and not enough Rick for my tastes, but it was still a good episode which laid down the future plot and managed to weave together multiple character’s stories, a skill The Walking Dead often struggles with. Because of this new-found desire to feature more characters per episode (undoubtedly a wise decision), it can be difficult to distinguish what the A-plot is. In this episode, it’s probably the Rick story, although that only takes up a few minutes at the beginning of the episode and a few seconds at the end. In it we see Rick undertaking the next step of his master plan and visiting the trash folk. It’s a pretty ballsy move but I can see where Rick’s coming from. He needs the numbers and the trash people have shown themselves to be easily swayed by whoever’s winning the war at that moment. It doesn’t work mind, and Rick gets locked in a shipping container never to be seen again. Well, we get a glimpse of him at the end of the episode but apart from these moments it’s a pretty Rick-free week. 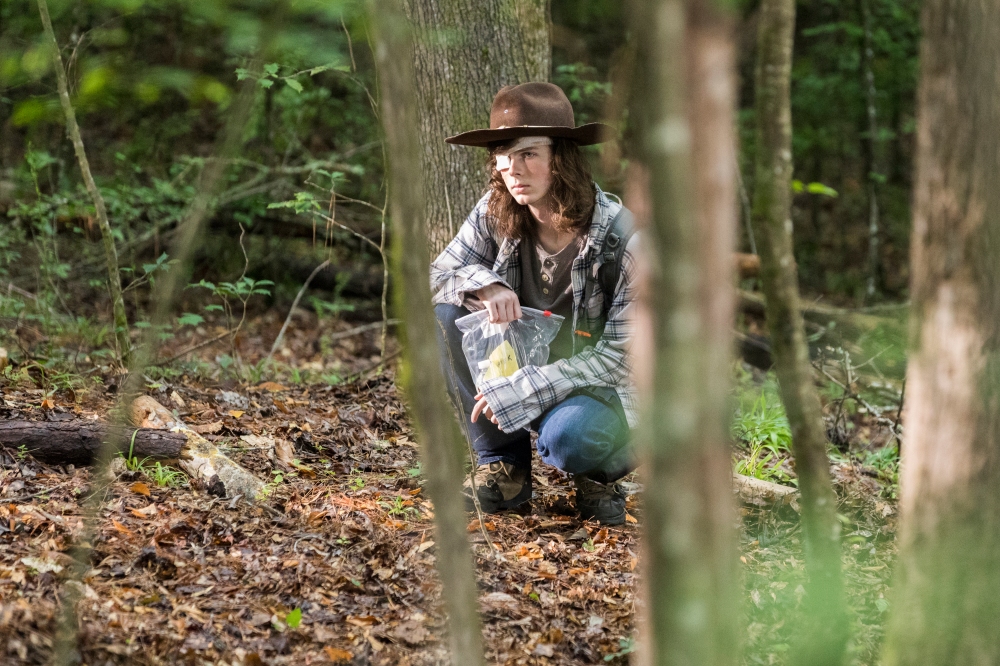 The rest of the gang are on their own quests though, each more ill-advised than the last. Michonne and Rosita are determined to see the overrun Sanctuary for themselves, after being forced to sit out the initial attack. A little dumb to risk their lives for this sure, but it’s a believable situation. If you’ve been couped up and out of the action for a while it’s understandable you’d want to see it with your own eyes. Plus it means we got to see Rosita’s kick-ass bazooka kill. Was it unbelievable? Yeah sure. But it was also the type of totally awesome, batshit insane stuff I love. And these so-called ‘filler’ episodes have to stand out in some way, what better than a completely over-the-top kill straight out of Invasion USA? Daryl and Tara’s plan, again, was a bit dumb. They’re planning to travel to the Sanctuary and kill Negan and Dwight (I think – that’s at least who Tara plan’s on killing). It’s dumb because it’s so unnecessary at this stage in the war but I don’t for one minute question either of their motivations. Daryl was locked up and tortured by Negan and his men and Tara lost the woman she loved to them; it’d make less sense if they didn’t try for some revenge. Still doesn’t change the fact that Daryl’s stupid plan is gonna get a lot of people killed. After last week’s punch-up, it definitely seems like another Rick/Shane style confrontations is on the cards…

The Hilltop stuff this episode was surprisingly fantastic. A moral debate about whether the gang should murder enemy prisoners should have been dull; it’s the same conversation we were having back in series 2 with Randall. And I thought I’d picked a side. But somehow the show makes me question myself once again – multiple times in the same episode. Xander Berkeley is once again the highlight as the slimeball ex-leader Gregory who is finally giving his just deserts as he’s locked away with the Saviour prisoners. Locking away a man who knows so much about the Hilltop with the people who want to escape and take over the Hilltop might not be the best idea, but it sure was satisfying to see. Jesus’ insistence on sparing the prisoners seems to have an angered a lot of fans (their jumping to mass-murder make them the sort of people I don’t wanna meet come the zombie apocalypse) but he actually makes a lot of sense. However ‘cool’ it’d be to see Maggie gun down a bunch of defenceless people, whatever their crimes, it just wouldn’t be the right choice in-world. Hopefully Rick and his newly discovered softer side will find it’s way to the Hilltop before it too late.

Next week looks like a doozy for Daryl and the gang. His and Tara’s plan will finally come to fruition and we’ll see how Rick makes it out of the pickle he’s found himself in. And if we’re lucky we’ll get some more plot with Carl and the new character Siddiq, who seems like a very promising addition to the group and who’s already miles more interesting than his comicbook counterpart.

See you next week for Time for After