“So, what do you like about being up here?”

Well, that’s it, Gravity is my favourite film of the year so far, it is that good. And it is definitely one to see in cinemas, there’s no doubt about that. If possible see it in IMAX 3D as well. I know, I know, it’s a lot more expensive but it is worth it, and that’s coming from a film fan who is usually staunchly against the use of 3D in films. More on that in a while though.  Like my other reviews, I will try to keep this one spoiler-free. Not that there is much to spoil; the best moments of the film aren’t to do with what is being told, but with how they are being told.

The story is short and sweet; a team of astronauts are about to come home after fixing the Hubble telescope, but a deadly debris field thwarts that plan and kills everyone but the two main characters Dr Ryan Stone (Sandra Bullock) and Matt Kowalski (George Clooney). From then on they have to find a way home whist trying to keep alive. That brings me onto the main, great thing in Gravity; the way the story is told is more important than the actual story itself. Don’t get me wrong, the story is great and has a few twists, turns and surprises in it, but even if you come for the story, you’ll stay for the spectacle. Where as most films will try to suck you into the narrative that isn’t Gravity’s main aim. You should be hooked by the story, but the real draw is the craftsmanship that has gone in to making the film the technological marvel it is. It is reminiscent of what Tom Gunning said in his 1986 article ‘The Cinema of Attractions’, where he talked about how early cinema offered something for the audience to wonder at, rather than creating an absorbing narrative. He said; “The story simply provides a frame upon which to string a demonstration of the magical possibilities of the cinema.”  This is the perfect way to describe how Gravity feels. If it wasn’t for the modern-day cinema goer being surrounded by the internet and various other media, which reveal just how this film is made, I would say that Gravity finally puts some much-needed magic back into cinema. While I do think director Alfonso Cuarón also set out to make an impressive story, and he succeeds, the spectacle of the film comes first. The amazing use of 3D, the awesome long shots, the beautiful cinematography, all of these things make Gravity not only the best film of the year, but also one of the most original blockbusters of recent memory. 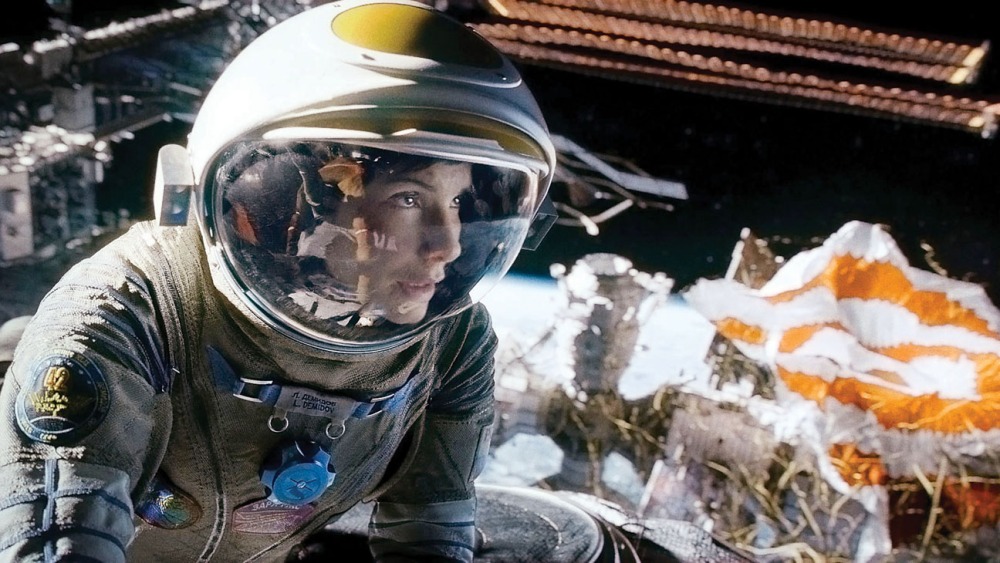 That isn’t to say the performances aren’t amazing as well because they really are. Sandra Bullock probably deserves another Oscar for her brilliant turn as first time astronaut Ryan Stone. Bullock was born to play the character and makes her both awesomely bad ass and incredibly vulnerable, sometimes at the same time. As the film goes on we find out that Stone has a sad back story about her recently deceased daughter and Bullock really manages to convey the emotion of a person who has lost a child. Her performance in one key scene even reduced two of the people I was watching the film with to tears. George Clooney on the other hand  is playing George Clooney. Well, technically he’s playing dashing veteran astronaut Matt Kowalski, out on his last mission, but for all intents and purposes it’s basically George Clooney. This isn’t a bad thing though, and while he doesn’t bring the same emotional depth to proceedings like Bullock, he helps lighten the film in its darkest moments and brings some funny lines with him. The scenes Clooney and Bullock share are brilliant, and the two have great chemistry, but this is definitely Bullocks film. Also making a slight, almost cameo performance as the voice of mission control is Ed Harris who, even just through just his voice, is as great as ever.

The 3D in Gravity is a seemingly contentious point, especially for someone like myself who despises most modern uses of the format, but even I was impressed by its use in the film. Unlike a lot of modern 3D movies (I’m looking at you Marvel films) Gravity was filmed, from the beginning with 3D in mind. It becomes part of the storytelling as much as the sound or special effects, and is the best use of 3D I have ever seen. The special effects also deserve a mention, being some of the most stunning and realistic effects ever put into a film. With a budget of under $100 million dollars, you can see where most of it went. Another brilliant aspect of the film was the soundtrack composed by Steven Price, which was probably one of the best of the year (along with the other great 2013 sci-fi film, Oblivion). In fact, the sound generally in Gravity is awesome. Cuarón manages to both capture the vast emptiness of space and the tight, claustrophobic nature of the astronauts suits and ships.

The Bottom Line: All in all, it would be hard to argue that Gravity isn’t a modern-day masterpiece. From sound and set design to the performances of its stars, Gravity never falters. There is never a dull moment, and at 90 minutes, the film doesn’t outstay its welcome. It’s an awesome and visceral thrill ride from start to finish, and it still manages to tug at your heart-strings once in a while. There are still some good-looking films left to come out this year (Martin Scorsese’s The Wolf of Wall Street being the one I’m most excited for) they’re all going to be hard pressed to beat the monumental piece of pure cinema that is Gravity.