“There’s no Superman out there.”

From Saga writer Brian K. Vaughan, We Stand On Guard is an action-packed story that asks the question; what if Canada and The United States were at war? Though it’s way cleverer than that sounds. At it’s core it’s a criticism of the War on Terror, and the United States as a whole. With art from The Matrix storyboard artist Steven Skroce and Preacher’s Matt Hollingswroth, this six-issue miniseries packs a lot into it’s few issues.

The plot follows a group of Canadian freedom fighters, defending their homeland from Americans in the frozen wastes of Canada’s northern territories. In pop culture, we’re used to seeing the American military–industrial complex as this huge, technological behemoth, and we’re always told they’re on the side of good. But it’s completely different when the power of America is against you. In this not-too-distant future, America have begun to rely even more on drones in their warfare, using giant unmanned mechs like something out of Pacific Rim, mechanical ‘Dogs of War’, and gigantic gunships. In comparison, our band of heroes don’t look like much. 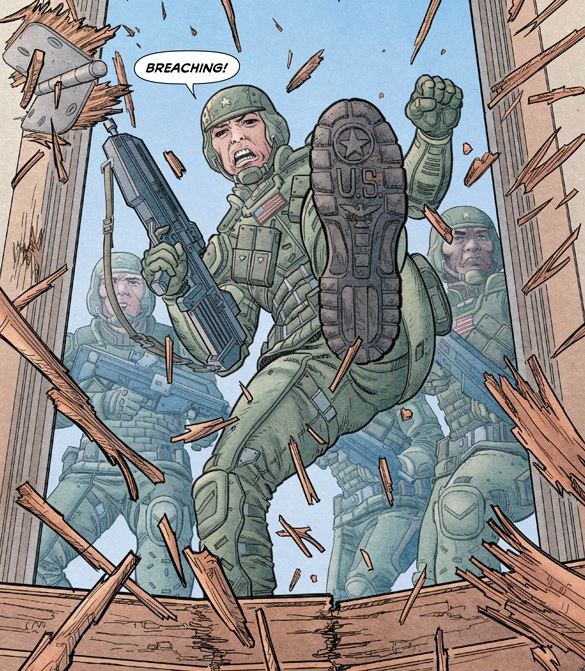 But like a lot of the comic, this draws parallels to the world today, as America invades a place that it far outmatches and systematically takes out the insurgents. By making these insurgents Canadian, it takes away the idea of ‘Us vs Them’ that many people have adopted. Seeing the US soldiers beat and arrest an elderly Canadian couple, though played for dark laughs, should hopefully give you pause to reflect on the fact that this sort of stuff is happening everywhere. By making them white, Vaughan is turning it on it’s head, using your biases to make them intentionally relatable. He’s demonstrating not only how unfair and unjust the American war machine actually is, but how unconsciously racist we’ve become when seeing this sort of stuff.

We see most of the story through the eyes of Amber, a young Canadian on the run from the US. Her family were some of the first to be taken out in tactical missile strikes, and she’s been running and fighting her own guerrilla war ever since. She meets up with the Two-Four, the rag-tag resistance, in the first issue and is soon caught up in their fight. The group is a fun bunch of distinct characters, who Vaughan has fun writing back and forths between. There’s one character who speaks entirely in French, though his meaning is clear from the context and other character’s reactions (though it doesn’t hurt to use the Google Translate app). But Amber is the focus, and she’s not your typical heroine.

Skroce’s art is superb too. It always takes me a while to get used to this kind of detailed art, with the faces looking a bit weird at first. But once I’m into it, I’ve sold. It’s one of the most detailed comics I’ve read in recent years and there are some really awesome full page spreads. The only downside is one gratuitous ass shot of Amber in the shower, which feels out of place with the type of story they’re creating, and with Vaughan’s writing as a whole. But luckily it’s not a recurring thing, and the comic manages to subvert a lot of the cliches you’d expect from a female hero (especially in comic books).

It’s clear that Vaughan has strong opinions on the war on terror. His excellent Pride of Baghdad is a superb comic; an allegory on the US invasion of Iraq shown through a pride of lions journeying through the war-torn country. He does similar things here. The slurs the American soldiers use against the heroes are slightly altered versions of the racist names you’ve heard countless times in regard to the Middle East. The reason for the US invasion is to steal Canada’s water supply, as due to climate change the American rural states have all but dried up. Change water for oil and you get the picture.

Ultimately, We Stand On Guard wants to to understand the situation from the view of the underdogs, the people who’s country has been invaded. The villains of the story do offer an alternate view, that perhaps there was cause for this violent invasion, but it never expects you to side with them. It gives you a good idea why people we traditionally view as enemies might go to the extents that they do when faced with the power and boot of an enemy like The United States.

But it’s also a really entertaining science fiction story. Even if you just go into it for the action, you won’t be disappointed. But there’s so much more there, just below the surface, that makes this a comic a must-read.