“I’m ready for my goddamn skin-suit!”

If you’re not won over by Negan yet, chances are you never will be. This episode sees him learning the ins and outs of the Whisperers as he suffers a trial by fire, courtesy of a jealous Beta. Elsewhere, Daryl and Carol begin what seems like a ill-advised mission into Whisperer territory, but we soon learn that Carol had it all planned out.

After being captured at the end of last episode – more specifically, allowing himself to be captured – Negan is neck-deep in Whisperers. Beta hates him straight away. And can you blame him? He goes against the core ideas of the Whisperer ideology. He’s got an ego, so the idea of him giving up his name and serving anyone seems far-fetched; he’s not taking any of it seriously; and he’s far too loud! It’s this latter one that leads to Beta almost killing Negan straight off the bat (pun definitely intended). But, as he reminds Beta, Negan has a noggin full of juicy Alexandrian secrets – killing him would be crazy. So it’ left up to Alpha to decide. 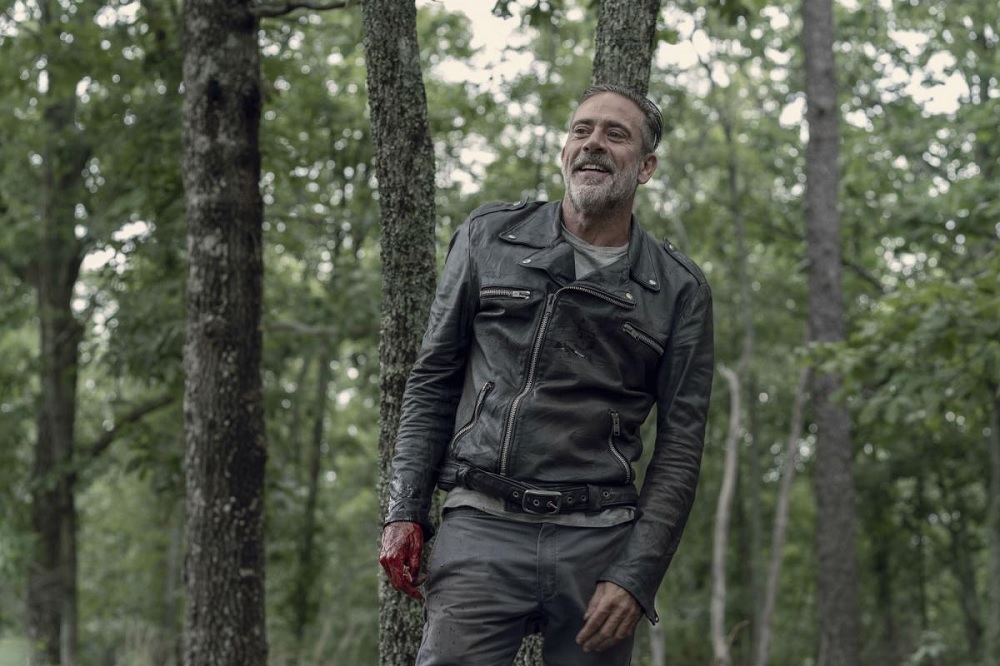 And decide she does. She sees something in Negan that Beta (and the audience, presumably) does not. She orders her right-hand man to test the newcomer. But it’s not quite the test you’d imagine. He’s ordered to dig a whole, skin a walker, kill a pig, smoke said pig, and put up with Beta’s crap. Now this is all played for laughs, and it’s a very funny scene (the scene of Beta and Negan comparing their respective slices of walker skin is hilarious) but it takes a turn towards the end when Beta abandons his new understudy in a flock of walkers. No way could Negan survive that! But we know he will. And his strut back into camp, covered in blood, shouting his own praises (“And you’d best bring that extra-long tape measure on account of my humongous balls.”), is fantastic. It wins Alpha over, and Negan swears fealty to her, all while Beta stands behind, humiliated.

Now, I don’t for a second believe that Negan is joining the Whisperers. I don’t know how long this will be drawn out (I think until the mid-season finale) but it’s all part of his plan. After all, he’s been earning that redemption for a year now (almost a decade in universe). The man has repented. The only way to prove it? Infiltrate the Whisperers, destroy them from the inside. And possibly bring back Alpha’s head on a platter.

Any episode with extended Daryl and Carol scenes is a great episode in my book. These two are the only OG characters left, and they’ve got a long history. When they’re together, the weight of 10 years of adventures sits in the background. And they’re so good together, a little flirty, a little nasty, mostly though just two great friends. So it makes sense that Daryl seemingly feels obligated to escort Carol on her dangerous mission. 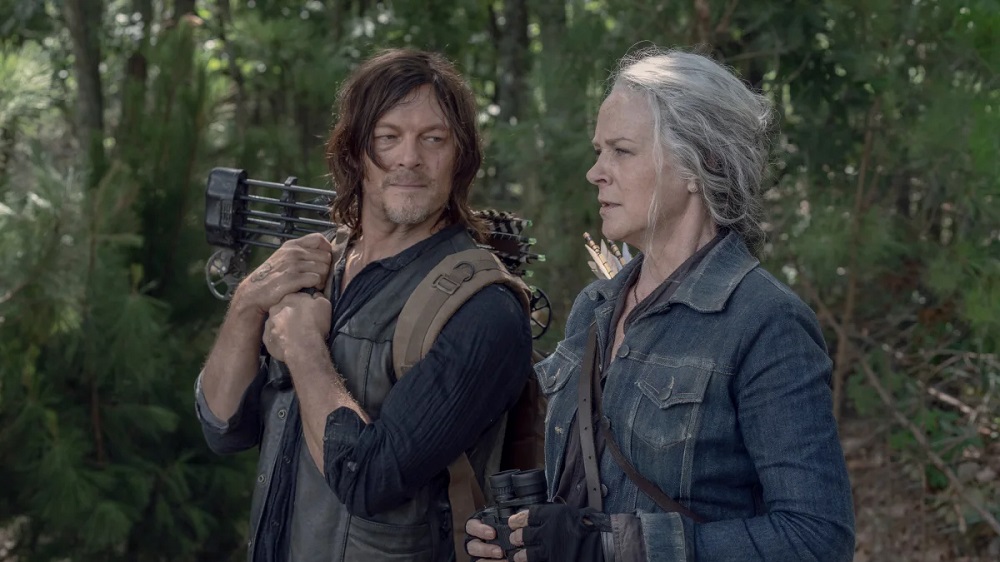 She hand-waves it away as just a reconnaissance, they won’t even go into the Whisperer territory she says. That changes to them going into the Whisperer territory. But we won’t alert anyone she says, before alerting a whole bunch of them. Their story ends with a Whisperer shackled in cable ties – to Daryl’s anger. As should have been expected, Carol knew exactly just what she was doing the whole time. The idea of a hostage is an age-old dilemma on the the show, going all the way back to Randall in season two. It’ll be interesting to see what happens to Daryl and Carol’s already strained relationship when she starts chopping bits off the Whisperer acolyte.

Both Carol and Negan think they’re about to start and/or finish the war with the Whisperers. But they’re unaware that the first few small cuts have already almost debilitated their side. Poisoned water has made a large chunk of Alexandria sick, what damage that’ll do I don’t know. But Alpha has worn them down, like she said she would. Luckily, between Negan’s infiltration and Carol’s hostage, the ball’s back in the good guy’s court.

Elsewhere, Eugene makes a friend. Which is really good, because I was getting the idea no one wanted to hang out with him. Nabila has other things to do, Rosita straight up ghosts the poor guy (admittedly, she has more important things to worry about – like two boyfriends and a life-threatening illness), and it’s all looking very sad. That is until he makes contact with a woman on the radio he’s been fixing up. She seems cautious, and Eugene oversteps the mark a few times, trying to find out details about her situation and coming off like a complete psychopath. But they end on good terms, which is relief, because his plot with Rosita was going nowhere (a fact everyone could see, except him).

Overall, this isn’t the show’s biggest of flashiest episode. But it moves the pieces into place for what is looking like a very interesting mid-season finale. Half of Alexandria are sick or dying, Negan and Carol have their own agendas, and the threat of the Whisperers draws steadily closer. On top of that, the episode was just plain fun. Negan is a very watchable character, and they really nail his dialogue so it’s funny and not obnoxious. He’s redeemed in my eyes, but I’m looking forward to seeing the Alexandrians accept him as one of their own.