“We’re losers, and we always will be.”

Like the book it’s based on, It Chapter Two is an epic. Following on from the 2017 surprise hit, this sequel spans a vast space of time, follows a big cast of character, and clocks in at a whopping two hours and fifty minutes. It’s also not entirely successful. But I have to commend director Andy Muschietti for going all out. Though it doesn’t get as cosmic as the book, it get’s super weird. And there are way too many bold and frankly batshit crazy creative decisions to not applaud it.

The film opens with a very intense scene, ripped straight from the pages of the book. A gay couple are attacked by a group of bullies (being Stephen King bullies, they are nastier than Hitler) and are set upon by Pennywise. It’s violent, it’s graphic, and it’s really nasty. And it sets out what Muschietti is trying to do in this sequel. He’s upping the ante and, like the characters, the film is growing up. The film overall is bleak and pretty uncompromising. I left the cinema feeling crap – despite the ending being radically more upbeat than the book – and felt pretty rubbish the next day too. But then as time passed, it grew on me. After the first film, it’s pretty clear that Warner Bros gave Muschietti a blank cheque. He really pulls no punches. And, after giving it a few days to sink in, I think this is truly the very best Stephen King adaptation ever made – for better or worse.

As one of King’s “Constant Readers” (and after finally reading the original It book a few months ago) I was eager to see what changes they’d make. But apart from trimming a few subplots (Audra and Tom only make small appearances), changing the ending a little to something more palatable, and stripping out the more cosmic elements, it stays pretty true to the book. It feels like a Stephen King story, which other films have found tricky in the past (looking at you Dreamcatcher). That are changes for the better too. Mike no longer gets sidelined in the final battle, for example.

The problem with having it split like this, unlike the book, is that all the death and depressing stuff is in this one, which makes for some often-grim viewing. Look how old they are! Look how rubbish their lives have got! They don’t even remember one another! I can see why they opted for a cheerier ending. No one wants to watch these characters go through hell only to forget each other again, like the book. Also unlike the book, the town of Derry isn’t devastated by the killing of It in the finale. But King got more than his share of flak for that original ending – something they love to make meta nods to in this film – so they do their own thing here and that’s fine.

The casting really couldn’t be better. The actors they’ve assembled for this sequel are pitch-perfect versions of their younger counterparts. Jessica Chastain’s tragic Beverley, whose found herself back in an abusive relationship; James Ransome’s Eddie, who has almost literally married his mother; Andy Bean’s Stanley, who makes the most of his limited screen time; Isaiah Mustafa’s Mike, who is the heart of the Losers and a huge improvement on the book; Andy Ryan’s Ben, who retains the same gentle nature of his younger self despite looking radially different; Bill Hader’s Ritchie, who is the star of film; and James McAvoy’s Bill, who is now a successful writer (and a stand-in for Stephen King) harbouring guilt for his brother’s death. 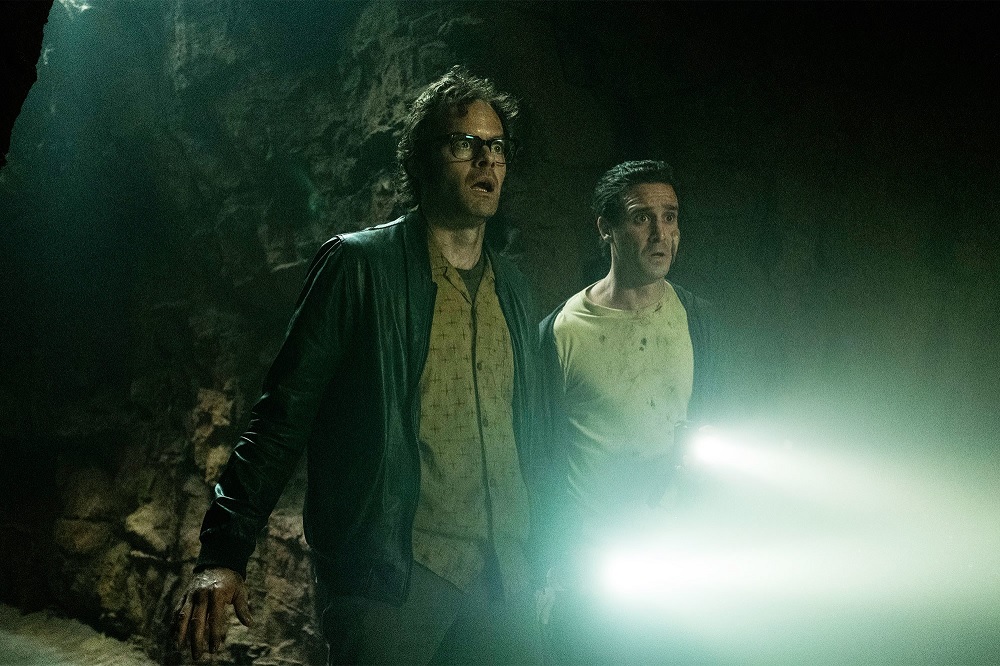 As I mentioned, Hader is the standout of this film. His Richie ‘Trashmouth’ Tozier is hilarious, often at pretty intense moments. This might have been annoying if anyone else had done it – and god knows King has his share of wiseass characters who aren’t half as funny as they think – but Hader was born for the role. His permanently bespectacled, messy, leather-jacket wearing Richie is a much needed source of levity. They even hint at a possibly deeper relationship between him and Eddie, which makes the conclusion of this film hit even harder.

The downside to having so many fantastic characters is that a few suffer. McAvoy turns in a really great performance (but that’s shouldn’t be a surprise by now, the man is outstanding) and the stuff with Georgie is fantastic, but Bill suffers from his subplot being cut. The relationship with Audra in the book felt really important to me, acting as the epilogue to the story and his reason for taking on Pennywise. In the film they try to give him this motivation through a boy he meets, who Pennywise kills in front of him. It leads to some very effective horror scenes, but also feels a little unnecessary.

Though almost three hours long, the film doesn’t waste any time. For example, the reintroduction of the characters at the beginning. Something that could have gone on for far too long is done very quickly. Through a series of great scenes, we discover their new situations, learn how they’ve changed, and how they haven’t. And no time is wasted. Similarly, upon reaching Derry, the group meet up and then split up again. What follows is a series of classic horror movie encounters – each one equally bold and filled to the brim with brave and sometimes questionable creative choices (Juice Newton?). it’s impressive that everything doesn’t begin to drag here too, or just fall apart under the weight. Muschietti reigns it in and keeps it all (just about) contained. And it’s never boring.

As a film, it’s all over the place. It’s surprisingly draining and for two and half hours of it’s run time, the hopeful, childhood appeal of the first film is all but non-existent. But that’s the point, They’re adults now, things are worse this time and won’t be as easy as when they were kids. They go through hell together and it’s exhausting. But, as they all collapse in the quarry after defeating It at the end of the film, the Losers all shedding a tear and feeling every second of their ordeal, the sun comes up and it’s all worth it. The darkness was necessary to get to the light at the end. And seeing them overcome their fears and defeat It is one of the most cathartic cinema experiences I’ve had. Though I do think it was a bit of a mistake marketing it so strongly as a horror. It’s scary-ish but never terrifying. Like the novel, it’s a story about horror, about fear. It’s not especially a horror film.

Whatever your thoughts on it as a film, as an example of Stephen King’s writing on screen, it’s without equal. It loses some important scenes, but the message and feel of the story are the same. It has the usual entertaining tropes and the feel of cosmic horror hasn’t been so strong in other adaptations. Not to mention the cameo from King himself – something he hasn’t done in a very long time. The world looks exactly like I imagined it on the page and it’s clear Andy Muschietti is a huge fan. It was a joy seeing it all come to life again.

Overall, it’s thoroughly entertaining, if a bit messy. The adult Losers are all great, as expected, and Bill Skarsgård is the quintessential Pennywise. There is so much being thrown at the screen in this film, it will definitely require a second viewing. Hopefully, we’ll get to see that director’s cut that’s been rumoured, with part one and two spliced together more like the book. I think that could fix a lot of the potential issues. But we’ll see. Until then, it’s an utterly one-of-a-kind film on its own.