“If the mother can’t quiet the child, then the dead will. Natural selection.”

What a perfect episode of The Walking Dead. I don’t want to oversell it, but it was perfect – everything worked, and nothing felt superfluous. This episode saw two plot threads running alongside one another, a terrifying introduction to Alpha and her Whisperers and a more light-hearted ‘side mission’ with the Kingdom’s main players. But despite the tonal differences between the two plots (or maybe because of these difference), ‘Bounty’ was an episode that had everything.

After making an appearance outside the gates of the Hilltop at the end of the last episode, Alpha and Daryl find themselves in a stalemate. After speaking to Lydia, Daryl knows how abusive her mother is and does not want to give her back. But Alpha wants her daughter back and is willing to trade Luke and Alden to do it. This leave Daryl in a tough spot and I can’t help wondering how Rick would have dealt with it. In a similar situation with the Governor, things quickly went sideways but that was hardly Rick’s fault. I do miss him still, but it was cool to see Daryl stride out of the gates and face down with Alpha. Rick, though undoubtedly still the best television character ever, had two settings; being nice or biting out throats. Daryl is a little more mysterious than Rick, which means there’s always a bit of doubt over what he’ll do. 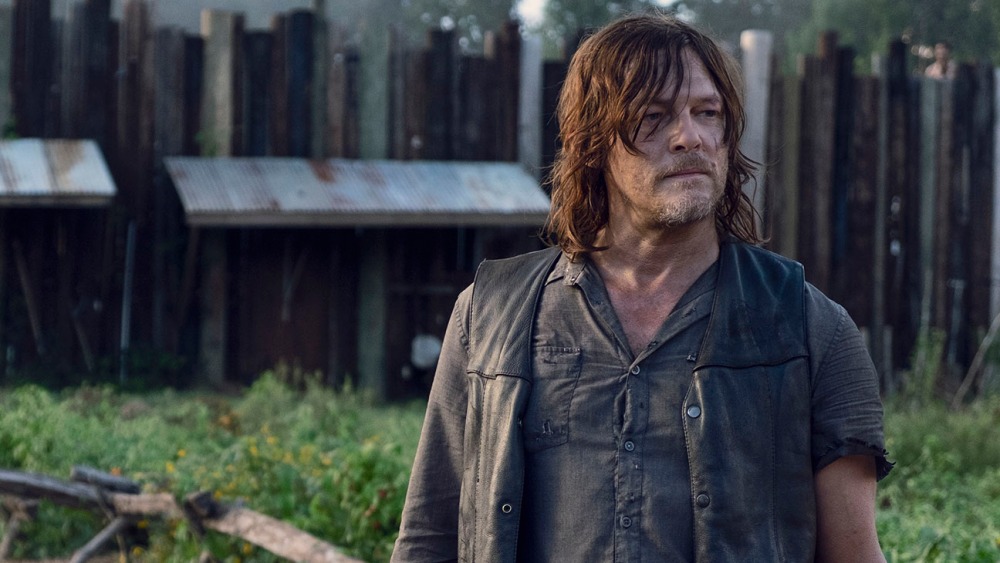 The show does a fantastic job with Alpha this episode. She was messed up in the comics, but unlike the other villains of the show, she is even more psychotic here. The Governor had a good side, Negan is midway through his redemption arc, but I doubt Alpha will get that. We already know she killed her husband and here we see her leave a crying baby to be eaten by walkers. This has got to be one of the tensest moments we’ve seen on the show, as walkers crept closer and closer to the wailing bundle. It could be that Alpha has taken things too far, and now needs to keep doing this displays of strength to keep the loyalty of her followers. But leaving a baby to be eaten is quite extreme. And it possibly hints why Lydia was so shook after hearing a baby cry last episode. How many babies has she seen get eaten?

But of course a baby will not get eaten on the show, that’d be a bit much. In the nick of time, Connie runs from her hiding place in the cornfield and grabs it. The show does something very interesting at this point. It switches to an almost POV of Connie and shows us that, yeah, the apocalypse is bad. But imagine how bad it would be if you were deaf. The sound design here is muffled, and underwater-sounding. For me, it was the sort of noise that makes you really uncomfortable. And having her being chased through a cornfield, one of the oldest horror movie stables, just upped the tension. Walkers burst from the rows beside Connie, we see figures and are unsure of whether it’s a Whisperer or a walker. It’s a testament to the show that they can keep producing these interesting set pieces going after almost a decade of being on air, and this scene was especially original.

But, despite horny Henry’s best efforts, Lydia must return to her mother. And it’s another example of a moral question that this show does so well. What do you do? Return the girl to her abusive mother and try to live with it? We see when Lydia is returned that Alpha is defiantly not a great mother, just as we suspected. She slaps her (a real whack too) then hugs her, then corrects her – it’s not “Mom” it’s “Alpha”. It’s the sort of confusing abusive relationship that really explains why Lydia is as she is, and it’s heart-breaking to see her returned. But the dynamic duo of Daryl and Dog are on the case! With Connie tagging along. It works well because Connie can’t hear, and Daryl barely talks. I sense a wonderful romance brimming! (If either of them survive their impending brush with the terrifying Beta).

Elsewhere in the episode we’re checking back in with the gang from the Kingdom. And I don’t know about anyone else, but Jerry and Ezekiel never fail to bring a smile to my face, I love them. After a routine run out beyond the walls, Ezekiel takes the gang on a side mission to rescue a projector bulb from a nearby cinema. His thinking is that, come fair time, it’d be pretty great if they could show some of the younger community members their first film, since their projector bulb blew half a decade ago. It’s a moment of levity and hope. Suddenly they’re not doing something to survive, they’re past that. They’re doing something more. It’s a lofty intention and I agree with Ezekiel that it’d give the kids something to remember (though sadly, if the story follows the comics, people at the fair will definitely have something to remember).

The begins well, with the gang using old-school funky music to draw the walkers out of the cinema. Jerry singing along to the music is hilarious, and Carol’s unimpressed face reminds us that, ultimately, we all have a friend like Jerry. The music makes a return as the guys are almost overrun inside the cinema, and we see them take down the horde to the soulful 70’s sounds of Eddie Harris. It’s a great scene, one that will make you remember that The Walking Dead can be fun, and it’s not always doom and gloom. Thanks to this music, and Emma Russack’s ‘All My Dreaming’ that plays over the closing minutes, this episode feels very much like the early days of the show. They don’t use music as much anymore, which is a shame as this show had some stunning uses of music back in the day. So I’m taking this as a sign of great things to come.

I was talking to my partner after this episode aired, and she summed it up perfectly. It felt like a classic episode of Lost, back at it’s peak. That show used to be able to juggle two different tones like no other. You’d have serious plotlines one minute, then you’d have Hurley driving a camper van or setting up a golf course. I was worried not much would happen this episode, but it actually turned out to be one of the best episodes of the show. It’s not a surprise to see that is the highest reviewed series in the show’s history. Hopefully it can keep it up. And with the fair and introduction of Beta on the horizon, I’m more excited than ever.