In typical Westworld style, a lot of questions were answered this week – but a few new ones were also raised. It also was the most action-packed episode of the show so far, thanks in no small part to the new and improved Teddy. Elsewhere, The Man in Black/William had a run-in with Maeve that ended badly for everyone involved. Especially Lawrence.

So firstly, Ford is officially back! Well sort of. He’s been living out his days in the CR4DL, a sort of VR Westworld where his conscience resides. Now he’s sharing a body with Bernard…in a weird Hulk and Bruce Banner kind of way. But even if he is evil (forcing mild-mannered Bernard to machine gun some park employees) it’s awesome having Sir Anthony back on our screens. Not that Westworld lacks powerhouse performances, but there’s something completely enthralling and dark about Hopkins’ Robert Ford.

Elsewhere in the park, William is having a really bad day. After coming across Maeve and her daughter (in a repeat of the horrific memories Maeve keeps having flashes of) he gets into a pretty brutal gunfight. Even though the MiB is not a great guy, it was tough to see him get beat so bad. All in all, he took about a half dozen bullets, but he’s made of tougher stuff. To be precise, pure Ed Harris rage will keep him going. Plus he’s got unfinished business with his daughter. But I don’t have high hopes for Harris to be in season 3.

And it’s with a heavy heart we say goodbye to Lawrence. Clifton Collins Jr has been a wonderful part of the cast, and his interactions with the MiB have been the highlight. And it was nice to see fully ‘woke’ Lawrence turning on MiB who, although he has been better recently, has been nothing but trouble for poor Lawrence. And with Dolores and co. destroying the backups, it really looks like Game Over for Lawrence/El Lazo. 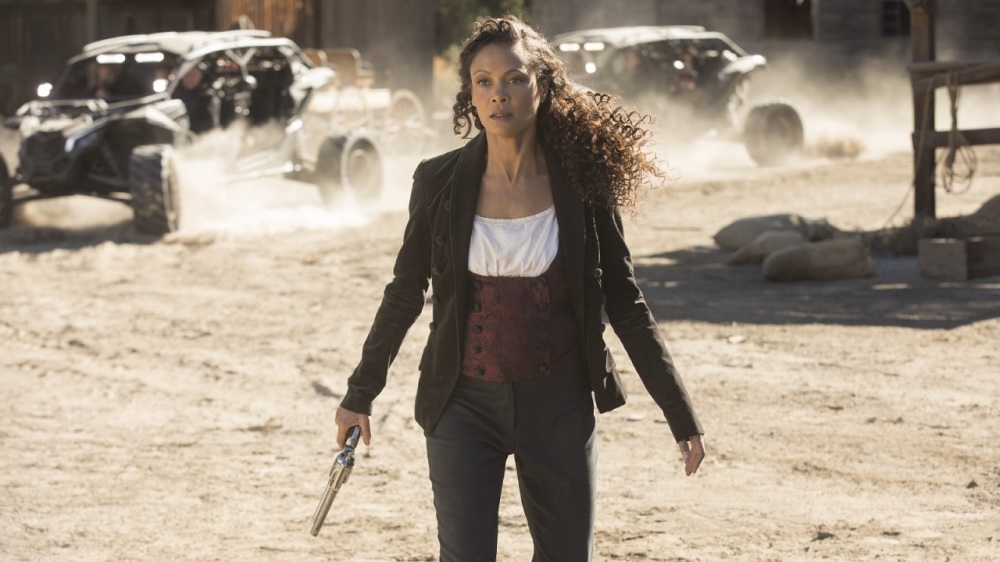 And Dolores is pretty much a full-on villain now, right? It’s not like it isn’t warranted but I think a lot of people are struggling with the idea that Dolores Abernathy is now leader of the robot uprising. And after what she’s done to poor Teddy, I worry that there’s really no way back for her. Speaking of Teddy, he’s turned into a monster. In one scene we see him robotically and very mechanically punching a guy (RIP Moustache Man) in the face until his head resembles a dropped watermelon. This emotionless kill best shows New-Teddy. He has an aim – wherever Dolores points him. And he will complete that objective no matter how many soldiers, hosts, or moustachioed Delos employees get in his way.

Next week’s episode seems very intriguing. It looks to be set complete around Zahn McClarnon’s Ghost Nation leader. Was he possibly the first host to awaken? Has he been influencing things? Whatever the answer, it definitely won’t be simple.