“Reply correct or get raped”.

After his wonderfully savage Kurt Russell-starring western Bone Tomahawk wowed critics and audiences alike (it was personally one of my favourite films of 2016) it was no surprise that director S. Craig Zahler didn’t follow up his violent introductory film with a light and breezy rom-com. In fact, if anything, his subsequent Vince Vaughn starring prison film is even more delightfully gut churning.

Vaughn plays Bradley Thomas (not ‘Brad’ as he repeatedly insists) a big, hulking, neo-nazi looking man with a crucifix tattooed on the back of his head for good measure. It’s a far cry from the days of Fred Claus. Despite the outwards appearance of a American History X character, Bradley is a actually a pretty cool dude. Zahler’s scripts have the brilliant ability to not over explain things to the audience and let them figure stuff out for themselves. In Bradley’s case it’s his head tattoo but steady 9-5 job suggests to us he’s a once-bad man trying to reform. His attempts at controlling his anger also paint a picture of man trying his best to change his ways. An early scene see’s him coming home early (after being let go from his job) to find out his wife has been cheating on him. Instead of taking it out on his wife though, as his appearance might suggest he would, he directs his anger towards her car – ripping it apart with his bare hands. He then sits down with his wife, hands bloodied, and has a calm and genuinely affecting conversation with her. Zahler’s script frequently surprises like this despite the films apparent genre trappings.

The film takes a while to get to the ‘brawl’ of the title but the slow burn build-up is equally impressive. After falling back into his old job as a drug courier Bradley makes a heroic decision that lands him with 7 years in prison. He never regrets his decision though and intends to do the 7 years and reunite with his wife and soon to be born daughter. But then the worst possible thing happens – real life vampire Udo Kier shows up with an ultimatum; “kill a target for us or have unspeakable things happen to your wife and daughter”. A lesser film might have had our main character take a moment to question the implications of what he has to do, but not Vaughn’s Bradley, who immediately finds the nearest guard and snaps is arm over his leg like a cheap piece of plywood. That’s enough to get him transferred to the maximum security prison where his target is and it’s where the real fun begins.

The warden of the throwback Red Leaf Penitentiary, the sort of prison where there’s torture implements hanging on the walls, is none other than Sonny Crockett himself – Don Johnson, continuing his late-stage career reminiscence after his fantastic turn in 2014’s Cold in July. Johnson’s Warden lays the b-movie flavour on thick with his southern accent, dark shades, and cowboy revolvers. The action also gets increasingly sickening right up until Vaughn literally kicks a mans head off. It’s awesome and mostly all achieved through practical effects. The pinnacle of which sees Vince drag a foe’s face across the concrete floor, ripping his features off in the process. It’s horrifyingly good stuff and it’s great to see how game Vaughn is. He put’s in here probably his best performance ever. It was hinted at in the much under-appreciated sophomore season of True Detective just how great Vaughn could be when given chance and he proves it here. If it wasn’t for the films grindhouse aesthetic I’d say he could be an awards contender. 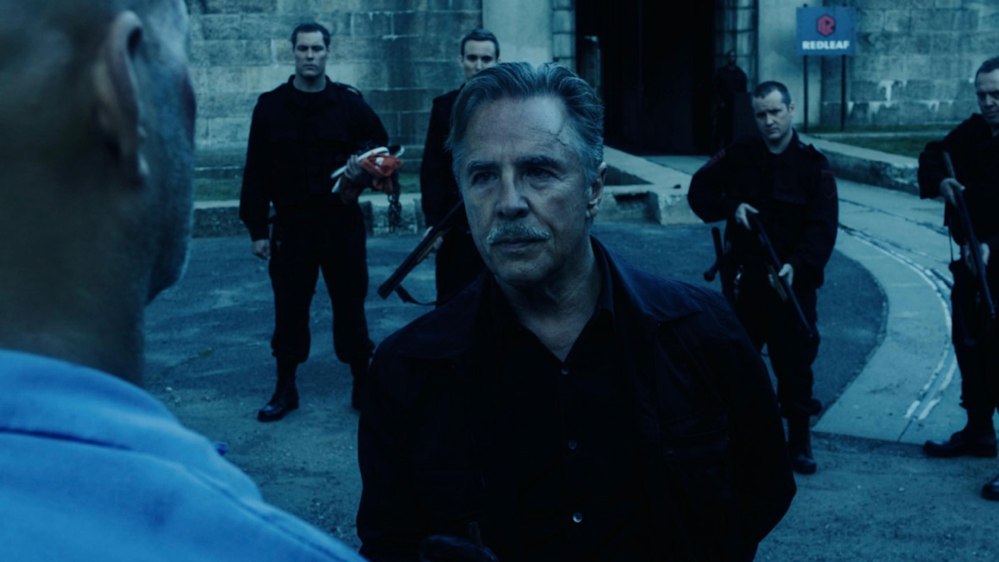 The bottom line: Brawl in Cell Block 99 is probably not quite as fantastic as Zahler’s previous effort, Bone Tomahawk, but it’s still a insanely entertaining display of bravura from the relative newcomer. Vaughn is a revelation as the the career criminal with a heart of gold and hammy support from the likes of Udo Kier and Don Johnson cements this as a b-movie with a brain. Hopefully Zahler can score a hat-trick with his next film, the aptly titled Dragged Across Concrete, starring Mel Gibson and Vaughn. If it’s any where near as good or as gruesome as his first two features then I think we’ll be in for a sickeningly good time.