We saw an early preview screening of Free Fire at HOME in Manchester as part of it’s Q+A tour around the country. Free Fire will be released nationwide on Friday 31st March.

Free Fire is the latest film from Director Ben Wheatley (Kill List and High Rise). It’s a film with a simple premise; one group of sketchy characters wants to buy guns from another group of sketchy characters. Things go badly and the two groups find themselves shooting at each other across a deserted warehouse. There are double crosses and twists but for the most part it’s pretty simple. The gunfight takes up the majority of the film’s run time and it’s awesome, technically impressive as well as thrilling and blackly hilarious.

The film wastes no time introducing us to the characters. There are ten of them making up the main cast, and director Ben Wheatley manages to establish each one with different idiosyncrasies in a very short amount of time. This means when the action begins and everyone scrambles for cover, you don’t get confused.  On one side with have Cillian Murphy and Wheatley regular Michael Smiley as Chris and Frank, Irishmen looking to buy some guns. On the other side selling the guns is the excellent Sharlto Copley as Vernon, dressed in gaudy seventies pastel colours. He is the standout in the film and gets all of the funniest moments. Mediating the deal is recent Oscar winner Brie Larson’s calm headed Justine and real life Action Man Armie Hammer as the super cool Ord. The cast is one of the most impressive I’ve seen for a long time, a lot of smaller actors I really, really like all shooting at each other. And each of them gets a moment to shine.

The rest of the cast is great too, and it’s with Sam Riley’s Stevo and Jack Reynor’s Harry that things go awry. After an altercation the night before, the two men meet again on opposite sides of this gun deal. Despite the best efforts of their associates the bullets start flying in gloriously stylish slo-mo as everyone realises what’s happening. The very first thing you’ll notice is that the guns are loud, very loud. It was even louder for us because the screening had increased volume. Ben Wheatley said in the Q+A after the film that they wanted to get as close to the deafening sound of real guns without actually making anyone deaf. This is as close a I’ve heard it in a cinema (John Wick Chapter 2 came close) and it did an amazing job of making you feel like you were in the middle of the shootout.

Another thing that helped pull the audience in was the set design. Production designer Paki Smith (who previously helped with the exquisite sets and period detail for Wheatley’s High Rise) had every single detail of the warehouse thought out. There is rubble littering every corner, with bits of metal, glass and hypodermic needles hidden underneath. As well as this the costumes are exact to the period, from the wide open colours to the stylishly 70’s trouser suit. If it wasn’t for the recognisable faces (even they’re hidden behind some of the best facial hair ever put on film) you’d be forgiven for thinking this was a b-movie straight from 1978.

Despite being a love letter to those B-movies of the 1970’s, Free Fire strives to be separate from Hollywood shootout cliches. Every bullet fired feels real, and the injuries are particularly agonising. No one shrugs off a bullet wound in this film, but on the flip side no one is killed by  a single bullet. If a character is hit in the leg (as the majority of them are) that character falls to the ground and spends the rest of the film crawling around and slowly bleeding out. In the Q & A afterwards Ben Wheatley admitted that it did make production easier by having everyone immobile. But he also mentioned how it creates a dynamic between the world of the standing characters and the world of the characters on the floor. It’s on the floor where the details come out, as the characters scramble for cover behind bits of concrete and machinery. It’s made interesting later in the film as one character with a head injury walks around the space, crossing the lines between the two sides and no one is entirely sure how to react.

It’s not just characters lying on the floor however. Other things change the dynamic in the shootout too. At one point two mysterious gunmen show up to pick off the two sides with rifles. It is also revealed about halfway in that there is a phone upstairs which leads to the world’s slowest chase as Franks crawls for it and Vernon follows in pursuit.

There are a lot of gruesome kills in Free Fire which might have you squirming in your seat. But luckily the film balances this by being very funny, in the darkest sense. As I mentioned earlier Sharlto Copley gets the majority of the laugh out loud moments, he’s just a really funny guy, but the other characters get some good moments too. Ord looking at his reflection and fixing his hair mid-gunfight is one of my favourites. In the Q+A, Ben Wheatley mentioned how the first draft of the film was very different, with few to no laughs. It was the second draft written by Amy Jump that added the much needed humour. As Wheatley said, “no one wants to watch 10 people bleeding to death for an hour and a half.”

Free Fire is excellent. I am struggling to think of a better way to spend an hour and a half at the cinema. It might not be for everyone, but to me is feels like the most accessible of Ben Wheatley’s films so far. It harks back to crime thrillers of the 1970’s (it’s even executive produced by Martin Scorsese) but it avoids any of the tropes that come along with that genre and feels truly original.

Director Ben Wheatley was joined by one of the stars of the film; Michael Smiley for a Q&A after the film at HOME in Manchester. Smiley was an late addition and stole the show, making fun of the audience and just being generally hilarious. The questions were great and it was awesome to here a director talk about his film in such detail. A few things I found especially interesting – 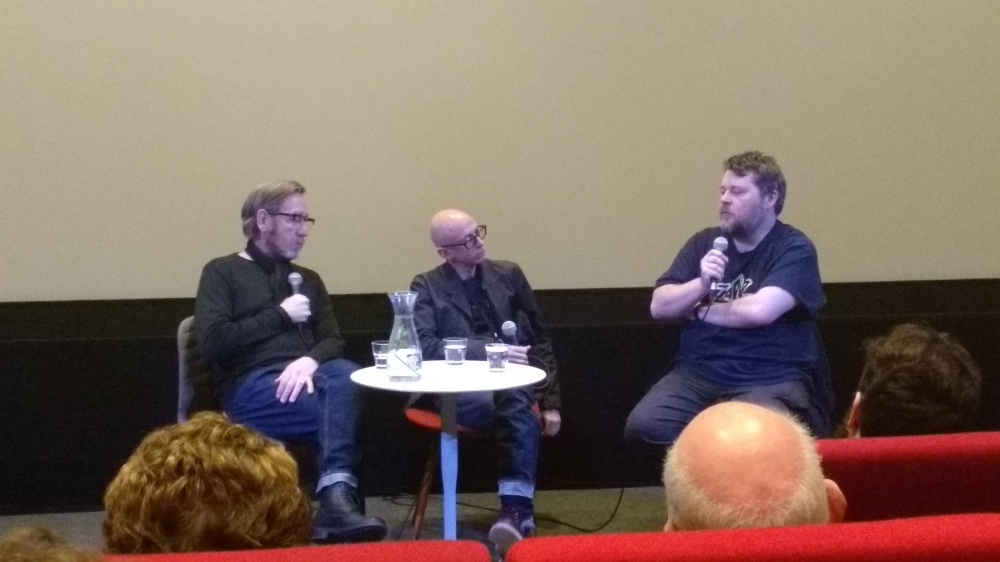 Thank you to HOME at Manchester for the awesome Q+A. And thank you for the previous ones that have been great too (Jeremy Thomas, Nicolas Winding Refn and Barry Jenkins). Support HOME here.