“I guess I’ll see you in the movies.”

After the brilliant Whiplash what ever director Damien Chazelle tried his hand at next was probably going to stun us. With the magical La La Land he does just that. Part Hollywood ‘Golden Age’ musical, part modern day LA love story, La La Land is both a glorious throwback and a modern day parable about fame and love in the City of Angels.

The minimal cast is superb and the the film almost exclusively focuses on the central love story between Ryan Gosling’s Sebastian and Emma Stone’s Mia. As the jazz loving Sebastian Gosling is brilliant; bringing the right amount of silliness and sincerity to the role. He has the difficult job of convincing the audience on his passion for jazz without annoying them. Jazz is notoriously pretentious and often the only thing worse than listening to it is listening to other people talk about it. But with Gosling’s natural goofy charm it works. I imagine even the most ardent jazz cynic will appreciate it at least a little bit after hearing Gosling’s Sebastian talk about it so passionately. I shudder to think what Sebastian’s original actor, renowned douche bag and previous Chazelle collaborator Miles Teller, would have done with the role but I can guarantee it wouldn’t have been nearly as charming as Gosling makes it.

And Gosling’s enjoyable charm is equally matched by Emma Stone’s Mia; an overworked barista and aspiring actress. Stone is the heart of the film and her journey to become an actress is at the centre. Stone is brilliant here mixing a desire to never quit with an endearing downtroddenness into a wonderfully realised character. And if Anne Hathaway can win an Oscar for her irritating sing-to-camera scene from the disastrous Les Miserables then Emma Stone more than deserves one for the ‘Audition’ scene. It’s a similar scene to Hathaway’s (both sing emotionally charged pieces to camera, live on set, in close up) but La La Land does it right. It’s partly due to Chazelle having the sense to save the use of the close up just for this musical number (as opposed to Tom Hooper in Les Mis, who uses it for everything) but Stone’s pitch perfect performance is the main reason. Her chemistry with Gosling is wonderful, as they start being playfully cruel to each other and realise there’s a spark between them. By the time rifts appear in the relationship the viewer will be more than likely stuck as to who to side with because the pair are just so damn likeable. 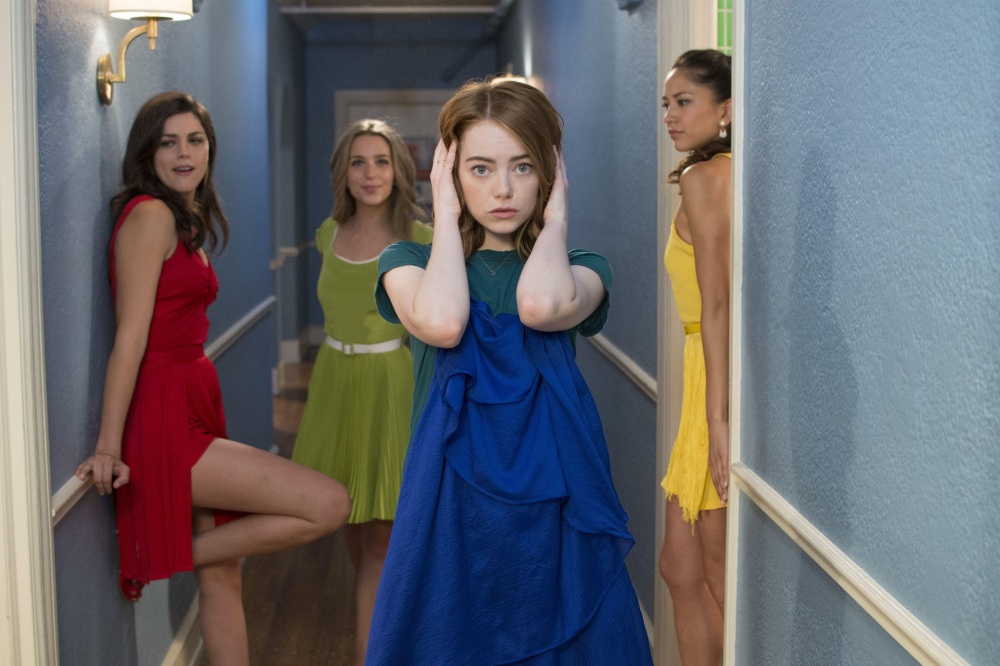 Damien Chazelle’s direction is top notch once again, capturing the bright sunny spirit of the Golden Age of Hollywood CinemaScope and all. Despite being only 31 with this and Whiplash Chazelle has cemented himself as a serious contender in Hollywood. There are so many memorable pieces of direction in the film from the dizzying pool shot at the Hollywood party, to the melancholy ‘what could have been’ montage at the end. The much discussed planetarium sequence is a visual treat too, as Seb and Mia rise up and dance in the stars. If it all sounds a bit cheesy don’t worry, it’s not at all like that. On one hand the film embraces the musical genre’s colourful camp past. That opening sequence for example is probably the most gloriously camp sequence of the year. But in a lot of ways the film is a self-reflexive musical. The film shows Mia changing her shoes before a big tap dance number for example, drawing our attention to the ridiculousness of the musical genre’s spontaneous song and dance numbers. The self-reflexivity is seen in the film’s meta-narrative as well, as it’s is about making music; a good portion of the songs on the soundtrack are created in the film’s diegesis. And with Mia’s constant auditions to crack the movie business the film becomes about film making too (also note the coffee shop Mia works at is on the Warner Bros. lot a name synonymous with cinema, especially the Hollywood golden age referenced in this film). This meta-narrative isn’t the film’s main focus though and it never overtakes the central plot line; the growing romance between Mia and Seb. 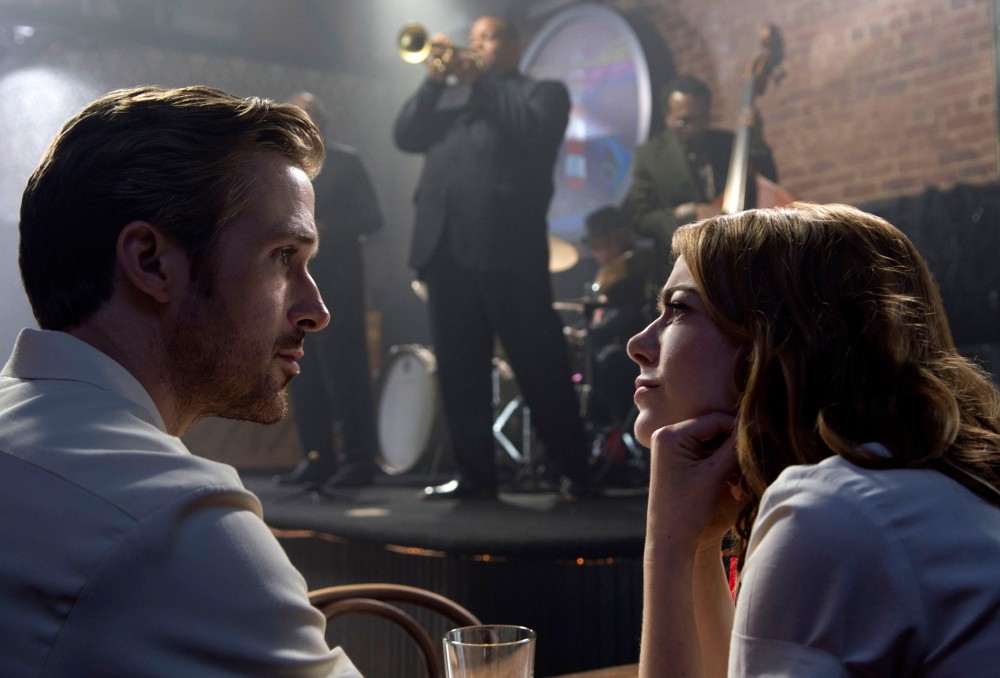 Linus Sandgren’s cinematography is frequently stunning, with many memorable shots as he glides the camera around the inventive musical set pieces. Usually in a long unbroken take too, like some sort of all-singing all-dancing Emmanuel Lubezki. Justin Hurwitz scores the film, his second feature film collaboration with Chazelle after Whiplash. The soundtrack for the film is brilliant especially the films top track ‘City of Stars’, a song no doubt headed for an Academy Award. John Legend shows up in the film and on the soundtrack as Keith, an old school friend of Seb’s who invites Seb to his successful band. One of the films best moments comes as Seb and Kieth’s band (The Messengers) perform their latest track’Start a Fire’ a song surely destined to propel them to the big time. The song’s use in the film comes as a turning point; it’s meant to have the sort of vacuous and mainstream jazz sound that Seb hates, at least the trad-jazz loving Seb Mia fell in love with. And it forces Mia ask whether Seb has sold out his dream (of owning a traditional jazz club) for success. Despite this the song is really good, possibly my favourite in the film. Perhaps it was an intentional move on Chazelle’s part to make the music that represents Seb selling out so enjoyable. That way the audience members will ask them selves what they would do in Seb’s position. Sell out be rich and make respectable, if a little empty, catchy pop hits? Or stick to your passion even if it gets you nowhere? 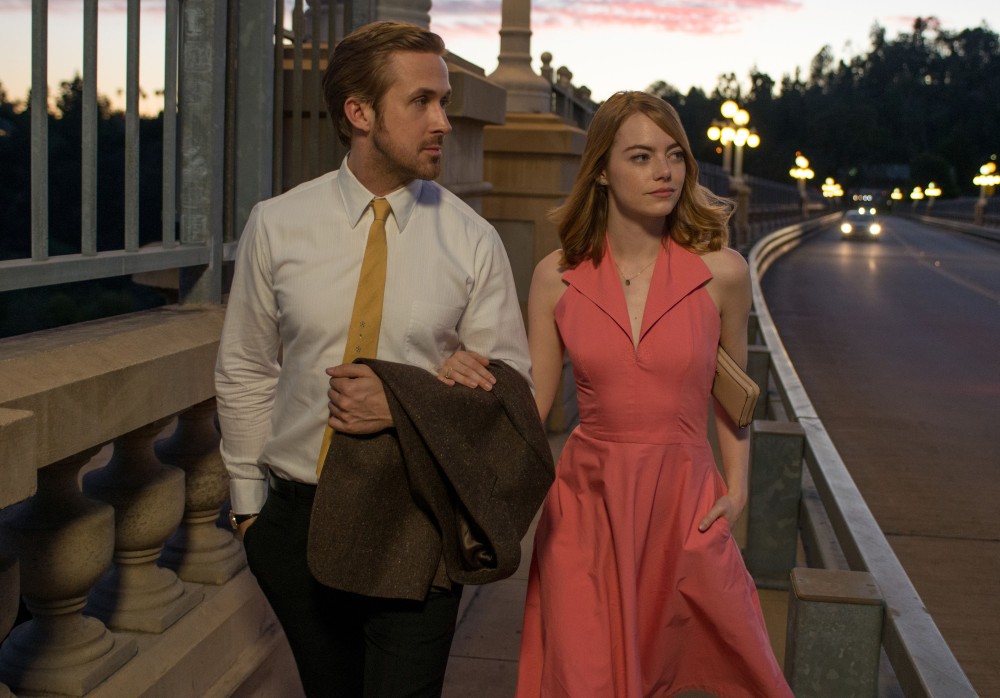 The bottom line: La La Land is one of the most enjoyable films of the year. It perfectly blends classic musical sensibilities from the films of Hollywood’s golden age with more modern day aspects. The two stars, Ryan Gosling and Emma Stone, are awesome and give the film a charming and quirky touch other actors may have not (I’m looking at you original cast members Miles Teller and Emma Watson). The director/cinematographer/composer team of Chazelle/Sandgren/Hurwitz do a masterful job. They’ve created a magnificent and timeless classic that will not only hit it big on this years awards circuit but also with audiences for years to come.