As soon as you see Rick and Michonne in this episode, for the first time since the premiere, you realise things aren’t the same. Michonne gets up, silently moves to the living room and gets a sniper that has been hidden in the chimney breast. Rick just stands there motionless and watches her leave. There’s no more Boston playing in the Grimes household. Once again it’s difficult to see our protagonist like this. Unlike a few others in the camp, Rick has resigned himself to the new world order, seeing it as the only way to live now. Which is fair enough, the Saviors far outnumber Alexandria and The Hilltop combined. He also has a very sad confession to Michonne, about the parentage of Judith. It’s something that has long been suspected but it’s heart-breaking to here Rick talk about it. Andrew Lincoln knocks it out of the park in this confessional moment. But away from all the sadness and despair it seems like there’s still some of that old Rick in there too, as he has to hold himself back from beating Negan to death. Also the way he speaks to Spencer when he’s out of line (“I’ll break your jaw, knock your teeth out.”) proves there is life in the Ricktatorship yet.

It’s not long before Negan shows up at the front gate. Seeing his shadow, along with the shadow of Lucille in his hand, makes it one hell of a threatening entrance. “Hot diggity dog!” Negan exclaims, upon seeing what Rick and the gang have been hoarding. Jeffrey Dean Morgan continues on his winning streak as the very evil yet extremely watchable Negan. His reaction to Father Gabriel appearing behind him is priceless and provides a laugh amid a bleak episode. He has quite a few very threatening lines in this episode, as he continues his mission to make sure the Alexandrian’s know who’s the boss. The best one is straight out of the comic, as he tells Rick what exactly The Savior’s are doing – “In case you haven’t caught on, I just slipped my dick down your throat and you thanked me for it.” It’s this sort of thing that makes every scene with JDM so much fun. He is clearly having a laugh playing this villain and he does it with gusto. Also it’s lines like this (and the often uncomfortably close-up conversations between the two) that will fuel the Negan/Rick fanfiction for years to come.

As well as Negan strutting about uninvited, we have his right hand man Dwight. One thing that I find strange is how much of a dick Dwight is. We know he’s not the best, but last week we saw a shred of humanity within him. Now he’s right back to messing with people for no reason, this time making Spencer and Rosita go and fetch Daryl’s bike for him. AND taking all their weapons. It’s sure to be just an act, something so Negan keeps him close and doesn’t suspect anything. But still, a little hint at the cool Dwight we saw last week wouldn’t have gone a miss. 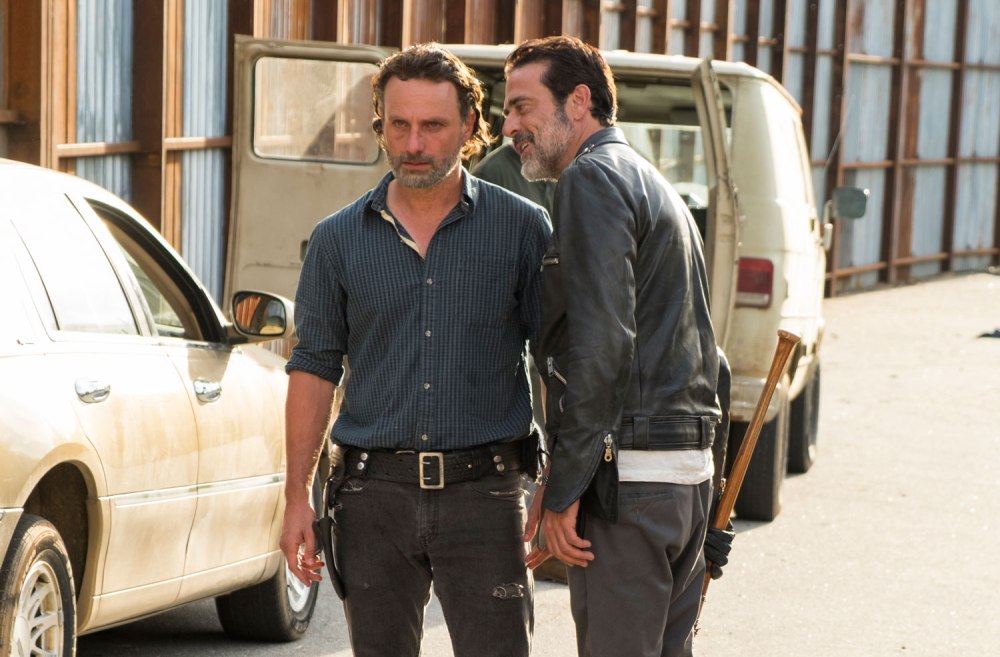 Daryl showed up looking more dishevelled than ever (turns out that was possible). He can’t even look at Rick without Negan barking at him. It’s tough to see such a strong character back where he belongs, but not being allowed to speak to his friends, never mind actually stay there. Away from the bigger members of the group, this episode was very good at giving the often overlooked supporting players something to do. For starters we got Gabriel showing himself to be a useful member of the group, helping to cover up Maggie being moved to the Hilltop by digging a fake grave. This act alone makes him more useful than the comic version of him ever was. As well as this we saw Rosita get some plot of her own, along with new least favourite amongst fans; Spencer. First of all, Rosita desperately needed something to do as she often felt forgotten. It’s cool that she is the one planning to rebel against Negan and not someone else. After all she lost Abraham and seeing Rick bend his knee to the killer must hurt. And ah Spencer. You can try and go up against Rick but it doesn’t bode well for you, especially after seeing how long his little rebellion against Rick lasts in the comics (about 4 or 5 panels before he’s gutted by Negan).

This latest episode will no doubt prove to be too slow for a lot of fans craving an action sequence or two (especially with its longer runtime) but it was a necessary break to see what everyone is up to and to remind people where the main players are after two episodes away. The interactions between Rick and Negan are great and straight from the comics. Another excellent episode in a very strong season.

One thought on “The Walking Dead – ‘Service’ Review”