Alice is back! Along with Carlos, L.J. and Angie. Wait, no hang on. Alice is now alone, Carlos and L.J. are travelling in a convoy across the Mojave and Angie, the very important little girl who needed a steady supply of the anti-virus in the previous film, well she’s forgotten completely. Even the wiki says “It is unknown what happened to her, as she does not appear in the next film.” And oh yeah, the entire world is a sandy wasteland. A lot can happen between two films.

Like Resident Evil: Apocalypse, Extinction introduces us to more character’s from the game series. This time it’s Claire played by Ali Larter. She is pretty great as Claire, for the little material she has. For one of the bigger game characters she really doesn’t get much to do. But she seems tough as she leads a gang of people in a convoy across the US. Carlos is back too and he gets the best scenes yet again. His last scene in which he crashes a huge tanker truck and casually smokes a joint whilst being surrounded by hundreds of undead is one of the coolest things ever, no matter how ridiculous it is. Oded Fehr is just a really great screen presence. 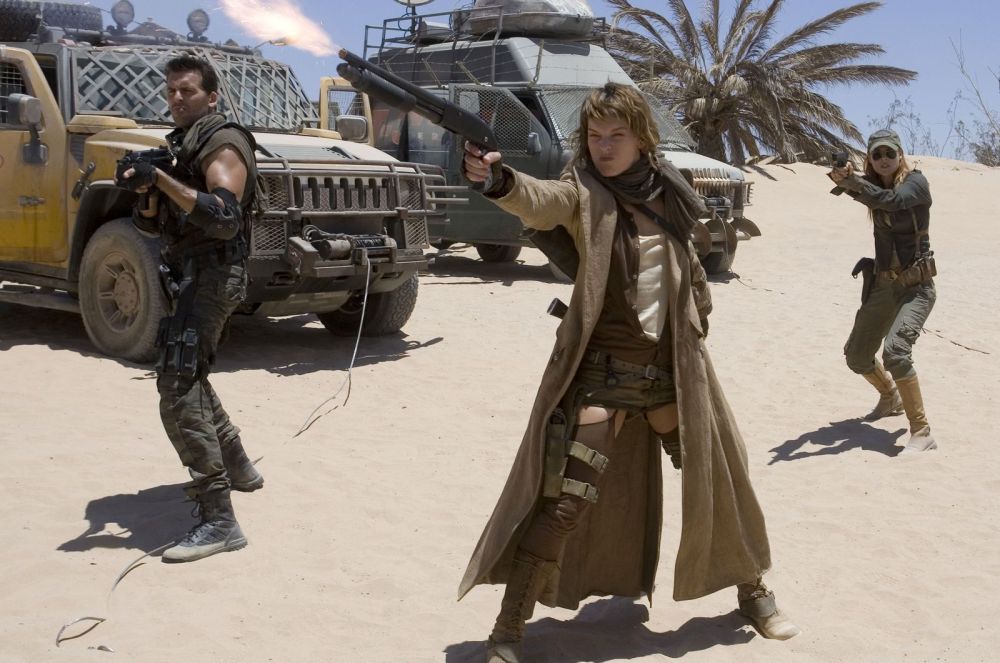 Overall this is the Alice show, and she kicks ass. Be it zombies, mutated dogs or hillbilly rapists, Alice is awesome. I’m convinced there isn’t anything she can’t take down with either a shotgun round to the face, a kukri slash, or a sweet drop kick/wall flip.It helps that the action and set-pieces are directed not just competently but stylishly by Russell Mulcahy. Mulcahy started his career directed music videos like ‘Total Eclipse of the Heart’ but he’s probably best known for the best movie ever made, Highlander. Now whilst Extinction doesn’t quite reach the crazy heights of that 1986 masterpiece, there are a lot of very cool scenes. The scene in which Carlos flips the tanker is amazing, with an in-the-cab view of the truck flipping which surprised me. Another cool scene is the attack with the birds. On on hand this looks a little goofy, with the birds and some dodgy CGI bringing it down. But seeing someone pecked to death by birds made me squirm and when Alice shows up and uses her fire/mind powers, it’s a real trailer moment.

Alice’s powers are an issue for me in this film. They’re so undefined. She can levitate things? She has telekinesis? Also a satellite can turn her off, but she can also fight that. It’s better than the last film in that regard though, and I feel like maybe they’re building up to something. But by the end of the film Alice has a clone, so it’s just getting more complicated. But that’s the plot in general. The filmmakers really want the films to connect and for the most part they achieve that admirably but things get messy along the way. For example there are a lot of pacing issues in this one. The film spends so long catching up from the last one and introducing new characters that by the time there we hit the forty – fifty minute mark it almost felt like nothing significant had happened.

There are also some really dumb character moments. Like L.J. gets bitten, but he does the worst cliche in zombie films, he doesn’t tell anyone! The absolute worst part of this is that his stupidity leads to Carlos’s death, the best character in the series so far. When I heard L.J. was back in this one I was worried because he was far from my favourite character in Apocalypse but he is just awful here.

On a better note, Iain Glen is in this one a whole lot. That man knows how to ham it up and he is so great when he’s on screen. The final fight with him in his tyrant form is great, mainly because it’s prosthetics for the most part. The fight is dumb but in an enjoyable way, a lot like the games in fact. And it ends in the laser corridor which will never not be cool.

Extinction is more or less the same as the previous two. If you didn’t like them, this will not win you over. It’s not a good film but it’s the closest the series has got to a good film. What it is, is a lot of fun and never boring. I have also found myself being drawn more and more into the story and I want to know what happens next, however ridiculous.

Next up we finally get to that sunglasses-throwing showdown, in Resident Evil: Afterlife.