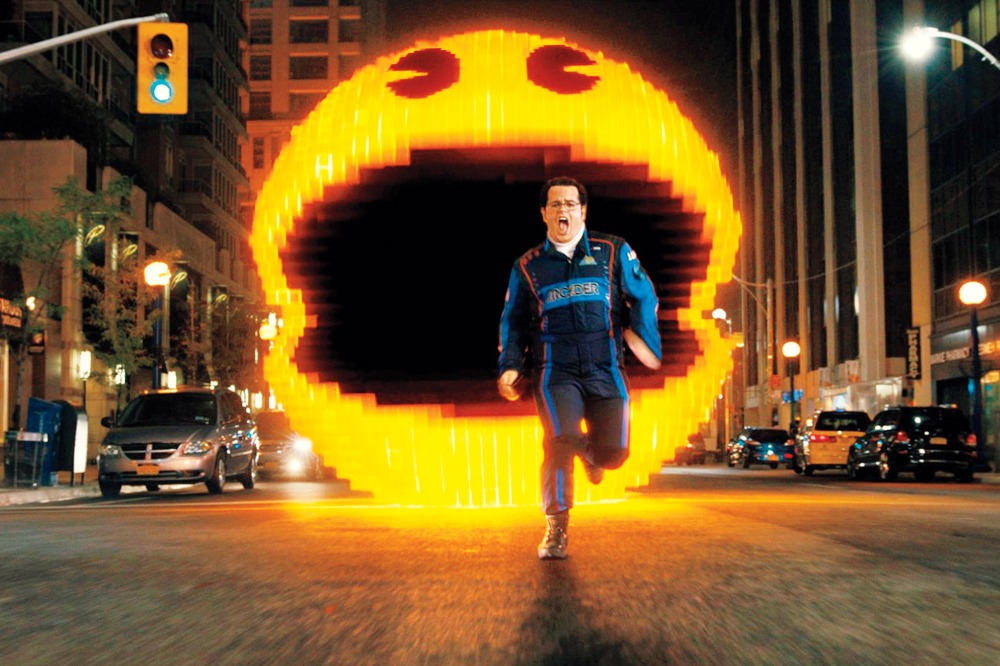 “You smell so nice, like the book of Genesis.”

I think it’s safe to say I’m really not the biggest fan of Adam Sandler. Considering his recent output, I don’t think anyone with any sense could be. Sandler has been churning out a steady stream of shit since the early days of his film career (in spite of it frequently being called his best, Happy Gilmore is still terrible) and has been surprisingly successful at it. But recently audiences have stopped flocking to his latest release, for a number of reasons. Maybe it’s because, due to an increase in technology, even the stupidest Sandler fan is now able easily access the horrific reviews. Or maybe audiences have just gotten wise to the vacations for his friends masquerading as films. Either way the box office is down and Sandler no longer has the draw he had in his heyday. That’s where Pixels comes in. Another Happy Madison production sure, but one with a credible director in Chris Columbus and a pretty solid premise that can be summed up as ‘retro video games invade the earth’. So where does Pixels fall on the Sandler scale? Is it more like the disastrous Jack And Jill or more erm… Click? (I’m really struggling to name a good Sandler comedy). The truth is, it falls somewhere in the middle. Sandler is consistently awful but there are good aspects to it, namely some of the supporting players. The jokes hit and miss and the concept frequently breaks it’s own rules and internal logic but there is something to it, a glimmer of a good film.

Fist things first; Pixels does offer a number of laughs (enough to pass Mark Kermode’s ‘6 Laugh Test’ anyway). Unfortunately these are never due to Sandler. Literally every joke of Sandler’s fails. This is what’s most unusual about Pixels, the main character and supposed heart of the film is, at best, a bored looking middle-aged man sleep walking his way through another role, and at worst a vacuum of anti-funny, sucking the humour out of every situation he’s in. Luckily though the film also contains leading comedic actor and professional fat person; Kevin James, who does… well, not very much. And unlike Sandler I do actually have a soft spot for James. Sure his main shtick is falling over but he puts his back into it, and despite his equally terrible films to Sandler, I feel James’ at least have heart (Here Comes The Boom, Zookeeper). At the very least, James’ nice guy humour in films like Hitch, Zookeeper, and the Paul Blart films is preferable to the offensive voices and yelling that makes up most of Sandler’s ‘jokes’. But in Pixels James is sadly underused. When the film flags, a quality slapstick moment from Kevin James would’ve helped, but the film never acts on this. Kevin James’s character is also the President of The United States, a funny joke in itself, but one that only goes so far. Some of the other characters don’t fair so well either. As the leading lady the wonderful Michelle Monaghan is giving next to nothing to do, except pretending to be enamoured with Sandler, a hard enough job in itself. Sean Bean also makes an all too fleeting appearance as a British army man, a character I would have happily spent longer in the company of. Brian Cox pops up too as a US General who starts off being important then the film just sort of forgets he exists. He’s hilarious in what little time he has though.

On the flip side of that though a few of the other characters provide the majority of the laughs and, for the most part, they’re genuinely funny. Peter Dinklage’s character, a rival arcade game champion, could have been irritating and unfunny (something not unfamiliar to great actors in Sandler productions) but in the capable Emmy winning hands of Peter Dinklage, he’s not. He’s one of the more over the top characters but Dinklage makes him funny enough that it’s not a problem. The main problem with his character stems from the illogical plot and it’s blatant disregard for logic, internal and external alike, but we’ll get to that.  The real surprise in the cast is the other nerd in the group, played by Josh Gad. I’m not a big fan of Gad, his work as Olaf in Frozen was occasionally fun but outside of that I haven’t seen him in much. His character in Pixels, Ludlow, has the making of an awful, awful stereotype. He’s on the larger side, he lives in a basement, and his ideal woman is a video game character. Plus he offhandedly mentions browsing 4chan at one point so you can imagine the type of person they were going for. But against all odds, Gad’s character turns out to be possibly the funniest thing in the film. His little comments like calling a straight laced marine he’s a ‘beautiful Nubian man’ mid-tough drill instructor rant is on the right side of absurd humour. His strange non sequiturs, such as Ludlow telling Monaghan’s character she ‘smells like the book of genesis’, are frequently hilarious, and much funnier than anything Sandler tries in the film. And Gad’s mid-film rendition of Tears for Fears’ 80’s classic Everybody Wants To Rule The World is brilliant, as is the majority of the films music. The music of Queen, Cheap Trick, and Spandau Ballet all feature prominently and at least gives the impression that the film is better than it is. A film that uses good music can’t possibly be bad right? Right? 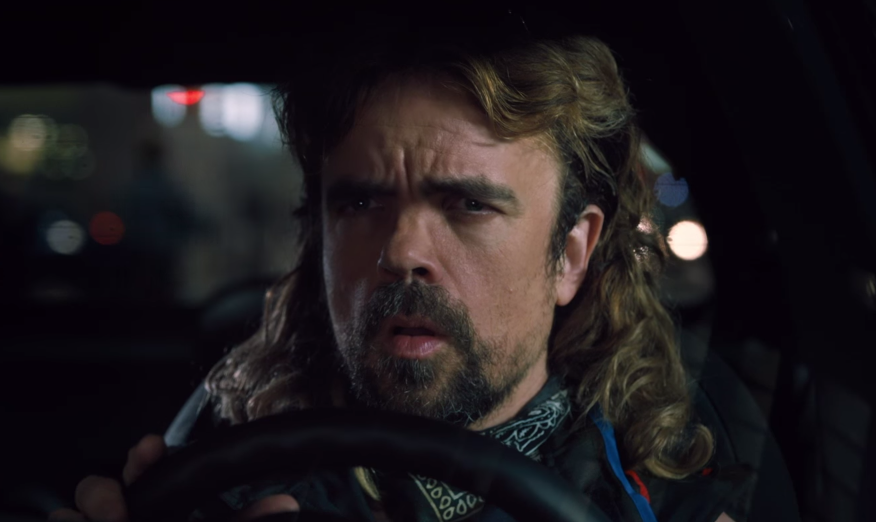 Along with Josh Gad and Peter Dinklage there are other, sporadic, bursts of humour. There is a genuinely funny moment where Pac Man creator Toru Iwatani (actually actor Denis Akiyama) tries to talk Pac Man down from his murderous rampage around the city. This is followed by a basic, but fun car chase as the nerds (as Pac Man ghosts) chase down Pac Man. Unfortunately this is where the first major problem presents itself. The film pushes the already questionable logic to the extreme and has Dinklage’s character cheat in real life, as it’s revealed he cheated in the tournament 25 years earlier. That’s fine and all, but how does he cheat in real life? The film shows his blip on the map zooming over the city, but never offers an explanation as to how he manages it. The film shows these alien video game characters doing impossible things but it’s not once suggested humans can do the same. So how does Dinklage do it?  Well it’s not explained and the problems get exponentially worse from there. The more the film runs out of steam the more logical fallacies appear up until the moment Josh Gad’s character is making out with his video game lover who looks human. So these video game characters can look human then? This character then turns against her people because of… a kiss with Gad’s character? Their abilities and motivations are so ill-defined it becomes increasingly frustrating and the films not absurd enough that this would have been intentional; it’s just lazy. I’m not asking for sense in a movie like this but if it can’t even be bothered adhering to it’s own internal logic then why should we care at all? The bottom line: Pixels isn’t a good film. It’s actually pretty terrible most of the time, but to it’s credit I can’t say I was ever bored. The visuals are often pretty cool and the effects are good (even more surprising considering the relatively small budget of $88 million) and enough of the jokes land to make it worth your while if you’re just looking for a quick laugh. Whether it’s genuinely funny or you’re just laughing at the surrealness of it all is another matter. Sandler is never funny and a lot of the other actors are underused but Gad and Dinklage are funny in a dumb sort of way. I’m finding it hard to recommend as it’d take a particular sort of person to enjoy this film. Not Sandler’s usual frat boy crowd (it’s not as mean spirited as that) and not younger kids either (nearly all the references are purely for those familiar with retro games and the 80’s). Maybe the only audience for this car crash are the cult film watchers. The sort of people who are curious at what you get when you mix together such a strange and baffling list of ingredients.