It’s back! And in fact it feels like it never left, although it has been at least 6 months since season 3. In those 6 months I’ve watched the crap out of The Wire and Breaking Bad, so does The Walking Dead still hold up?

Yeah, it does hold up. In fact I’d say (from the first 2 episodes at least) that this series is much tighter and better scripted than previous seasons, and I loved it already.

“30 Days Without an Accident”

This episode largely deals with Rick trying to change his life. He doesn’t want to be out fighting walkers anymore. He’s tired and sick of it. This episode begins with him working on his farm, growing plants and raising piglets. At one point he digs up a gun, before throwing it away. Rick is turning his back on that part of his life. 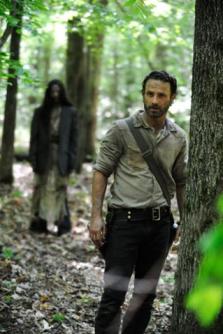 He also does this farming with headphones in, blocking out the sounds of the walkers that are clawing at the gate just a few steps away.  We get the feeling even now that this life will not continue.

The prison has been upgraded since the end of season 3, there’s now a kitchen, much better defenses and a council to make the big decisions. The gang also seems to be more organised, and better at handling the walkers when they leave the prison. However things can still go wrong. In the best scene in this episode a group goes to the nearby supermarket to gather supplies. The roof is not strong and zombies soon start falling through. It’s a great and slightly surreal sight to see zombies literally falling from the sky, and it’s an awesome spectacle to have in the first episode.

Another cool scene sees Rick venturing outside and meeting an utterly crazy woman. She is a really cool character and the scene in which she stabs herself so she can be with the decapitated head of her husband is harrowing to say the least. “You don’t get to come back…” she tells Rick before dying. He can’t get over the things he’s done, he’s just got to move on.

Joining a few new faces is everyone’s favourite drug dealer Lawrence Gilliard Jr, who is playing Bob Stookey who was in the comics but looked a lot different. He is a great actor, as he was 10 years ago in The Wire and he’s a welcome addition.

Overall this episode just seems to be of a very high quality. Things have been tightened up, and every character is getting their due. The plots for each character seem to be very interesting and exciting, I can’t wait to see how things pan out. The Walking Dead is back!

For the review of episode 2, I’m handing you over to Tom.

Well, don’t get used to those piglets. After the slow but awesome start to the series, episode 2 doubled both the action and the threat. At the end of the last episode we saw newcomer Patrick get killed by a mysterious flu-like disease, and this episode showed the havoc he caused as a walker. Many awesome walker scenes are created because of it and this shows the group that they have to start quarantining people who show symptoms of this mysterious disease. While at the minute this is just used to kill off the faceless prison inhabitants (The Walking Dead equivalent of Red Shirts) it won’t be long before fan favorites starting showing symptoms as well. And as soon as Hershel starts turning, me and this show are gonna have a problem.

While some characters have hit their bad ass stride (more on that on a minute) it seems Tyrese might be on the path for a dark and awesome story line. Played by another great The Wire actor; Chad 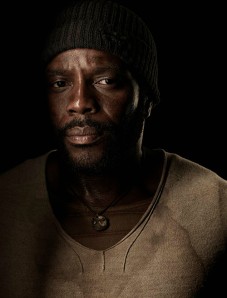 Coleman, it’s about time Tyrese got a good story and he was one of my favourite comic book characters. In episode 1 it felt like Tyrese could have done more, but he was a big part of episode 2. The cliff hanger of him seeing the infected Karen’s charred corpse was brilliantly done and if his story line follows the comic, it’s only going to get worse.

While many fans had problems with the character of Andrea deviating from her comic book counter part I don’t think anyone will be against the way the show is changing Carol. While in the comic she was weak and generally annoying (a bit like series 1 Carol) in Series 3 she is seriously bad ass. She kills without hesitation and understands the world they are now living in. Also, the story line of her secretly training the kids to use weapons looks as if it could be a great sub plot, and it’s really nice to see her becoming one of the main characters.

Overall, The Walking Dead series 4 has started off incredibly strong. While not as action packed as the start of previous seasons, the drama has see a considerable leap in quality and there are many less low points. Hopefully the series can stay at this level and new show runner Scott Gimple is doing a brilliant job. So far The Walking Dead seems to be filling the large hole that Breaking Bad ending left in me.

Reviewed By Tom and Jack