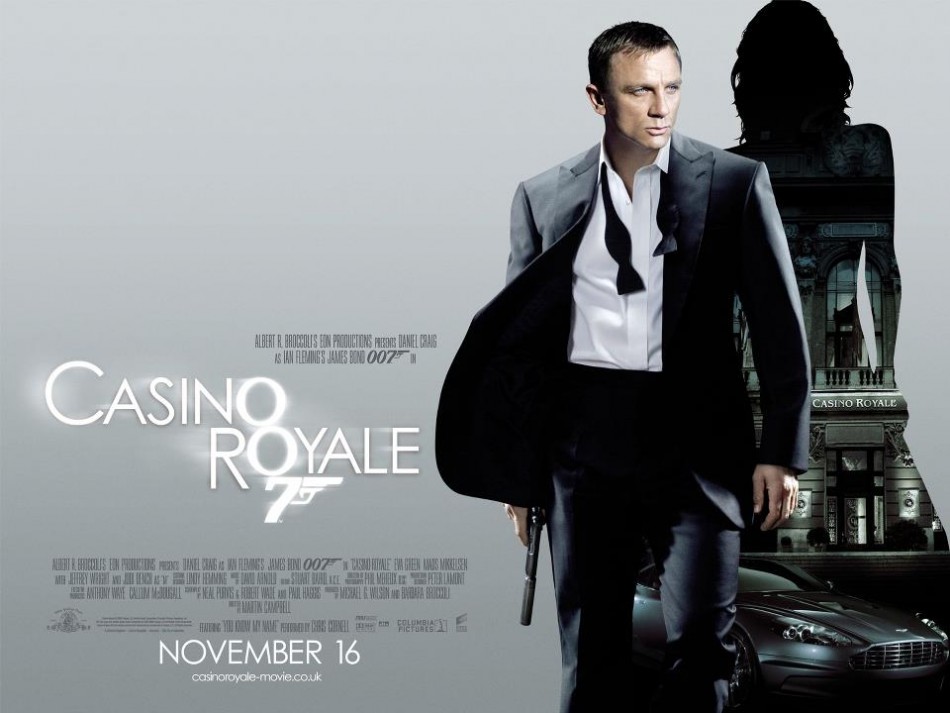 Goodbye Pierce Brosnan! After his contract of 4 films was up (and because he was getting on a bit) the search was on for a new Bond. A lot of criticism was leveled at Daniel Craig when he got the role, some seeing him as too bland, or even too blonde. But how wrong they were.

First up, Daniel Craig is brilliant as Bond. He makes it his own and when he says the famous line at the end, there’s no doubt in your mind that this guy is Bond. He’s a much more physical 007 than previous incarnations, and you get the idea that he feels every punch. He’s a much more human Bond, by that I mean you know this guy can be hurt and could be killed, unlike previous films where Bond was almost invincible. But I’m not 100% sure that’s a good thing. Daniel Craig IS Bond, but it doesn’t feel like he’s quite the Bond we’ve come to know (until Skyfall that is). He’s a brilliant action hero, but he’s not the dashing spy, throwing quips out every couple of seconds.

The supporting cast is very good in Casino Royale. The villain is Le Chiffre played by Mads Mikkelsen, who has a typically Bond-ian deformity, he weeps blood. He’s charismatic, but also a little slimy and very contemptible. The Bond girl is a great element of Casino Royale and she is Vesper Lynd played by Eva Green. She’s especially good because she can match 007 or even outwit him. One great scene is their conversation together when they first meet, you defiantly get the impression Bond has met his intellectual match. It makes sense then that he falls for Vesper and plans to travel around the world with her. Another supporting character is M, played by the returning Judi Dench. And what can I say? Judi Dench is amazing as M whenever she appears, she’s just great.

After the CGI-heavy Die Another Day it’s understandable that the producers wanted the stunts in Casino Royale to be done the old-fashioned way. I’m so glad they were. My favourite action scene in Casino Royale is the runway chase in the middle of the movie which see’s Bond chasing down a bomber who has hijacked a tanker truck. It’s a great scene and has some really great action, despite being firmly grounded in reality like the rest of the movie. Another cool scene is the action scene towards the beginning in which 007 chases a free-running bomb maker over a construction-site, up a crane and into the local embassy. I think this is the scene in the movie which will go down as a classic, it’s a thrilling scene all the way through and is one of the scenes that feels like classic Bond.

Much of the action takes place at a casino, so a lot of the drama comes down to the cards on the table. I think it helps if you have an understanding of poker. I didn’t have a clue what was going on when I saw Casino Royale in the cinema, but now I have a limited understanding of the game (thanks to the poker in Far Cry 3). It was enough however, and helped me to appreciate how awesome these scenes actually are.

Casino Royale is a tough one to review. In itself it is an excellent movie. Perfectly paced, great action sequences and some really enjoyable characters. But it’s not the most Bond-like movie.  And this is my main problem with Casino Royale, I didn’t want a reboot. I especially didn’t want a hard-edged gritty reboot. Casino Royale is a brilliant movie, one of the best action thrillers of recent years. But after watching all of the series back-to-back over the last few weeks, I can’t help feeling it’s a little too far removed from previous films. Daniel Craig is great, and only gets better by Skyfall, but part of me misses the quips. I don’t want the series to go back to Die Another Day, I just wish they’d found a medium in between, which they eventually do in Skyfall. Ok, so what I’m getting at is that Skyfall is the greatest Bond film, but more on that in a few days.

Despite my complaints, this is still a great movie. And when the movie ends on Daniel Craig saying those immortal words and the Bond theme kicks in, you more or less forget about any reservations you had. It’s one of the best movies of recent years, and once you’re over the fact that this is a reboot or a prequel or something, it’s one of the best Bond films. Just don’t try to comprehend the canon of this series, it’s impossible.