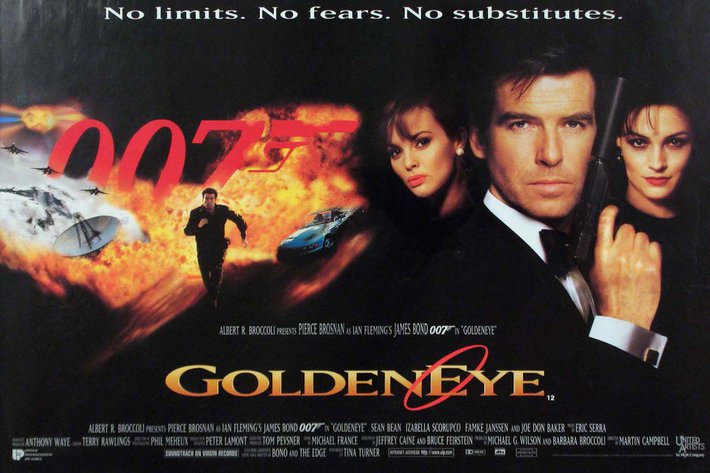 After Licence to Kill was released there were some legal problems. Legal problems which caused a 6-year hiatus and the loss of Timothy Dalton as Bond. But all was not lost, because eventually Bond did return. This time in the form of Remington Steele himself; Pierce Brosnan.

GoldenEye is my favourite Bond film, I think it’s just brilliant. Here’s why. First up; the new Bond. Pierce Brosnan IS Bond to me. He’s the 007 I grew up with and if someone says “James Bond” I think of Pierce Brosnan. He has the best mixture of wit and menace, somewhere between Roger Moore and Timothy Dalton. In my opinion he’s perfect, and it’s clear from the start of GoldenEye. He’s suave, often funny and usually quite cold and brutal. Brosnan’s Bond is often so brilliant in GoldenEye I think because he has a great villain to play off against;  Alec Trevelyan. Trevelyan used to be 006, and was close friends with Bond. But he faked his death and came back as crime boss Janus. (I’m not calling this a spoiler because the movie is almost 20 years old). Trevelyan is played by the always amazing Sean Bean. He is just great here, and you believe that he’s Bond’s equal at everything, making the fight between them at the end equal to the best in the series. I find that the Bond films that have a plot that involves Bond personally (On Her Majesty’s Secret Service and Licence to Kill) are often the most enjoyable.

The Bond girls in GoldenEye are great as well. The main one is Natalya Simonova, played by Izabella Scorupco, who is especially useful as she is an expert with computers, meaning James would be stuck one more than one occasion without her. The other Bond girl is Alec’s right hand woman, Xenia Onatopp played by Famke Janssen. She’s just plain evil, and her trademark is crushing people with the thighs. She’s terrifying, but she also gets a really cool death (accompanied by a great Bond-quip). Although defiantly not a Bond girl, another henchman for Trevelyan is Boris Grishenko. He’s sort of the comic relief on the baddies side, and it played really well by Fegan Floop himself; Alan Cumming. I couldn’t imagine anyone else shouting the famous “I AM INVINCIBLE!” line except him.

The action sequences in GoldenEye keep up the high standard of previous Bond films and then just blows the rest out of the water. The tank chase through the streets of St Petersburg is a sight to behold and it ends with a head on collision between a tank and an armoured Soviet missile train, I mean, how awesome is that? The ending to the movie takes place on a suspended satellite dish in the midst of the Cuban jungle. I’m not sure what parts are real, special effects or miniatures and tricks of the eye, but it sure is impressive. The fight between Bond and Trevelyan is great and is as good as the brilliant fight between Bond and Red Grant in From Russia With Love. Like that scene, this another fight in which you really feel Bond may have met his match. I mean obviously he’s not going to lose, but Trevelyan is tough bad guy as well as a clever bad guy.

The them music for Goldeneye was not done by John Barry like many of the previous films, and that is a shame because all of his themes have been awesome. Instead the theme is done by Éric Serra. I only found out whilst writing this review that many criticised his work on GoldenEye, but that just seems ridiculous. To me, you cannot have GoldenEye without the great score by Éric Serra, sure it’s not typical Bond (and sounds exactly like the one he did for Léon: The Professional) but it really goes along with the plot and tone of this movie, and fits well especially in the scenes in post-Soviet Russia. Just listen to it, it feels like a huge part of my childhood to me, I’ve seen this film SO many times I just can’t imagine it without this score. On the subject of music, the main song is sung by Tina Turner and was written by Bono and The Edge. Yeah, that’s almost as bad as it sounds. It’s not horrible, and the opening titles more than make up for it, but it’s still one of the weaker themes for me.

Up next – Tomorrow Never Dies