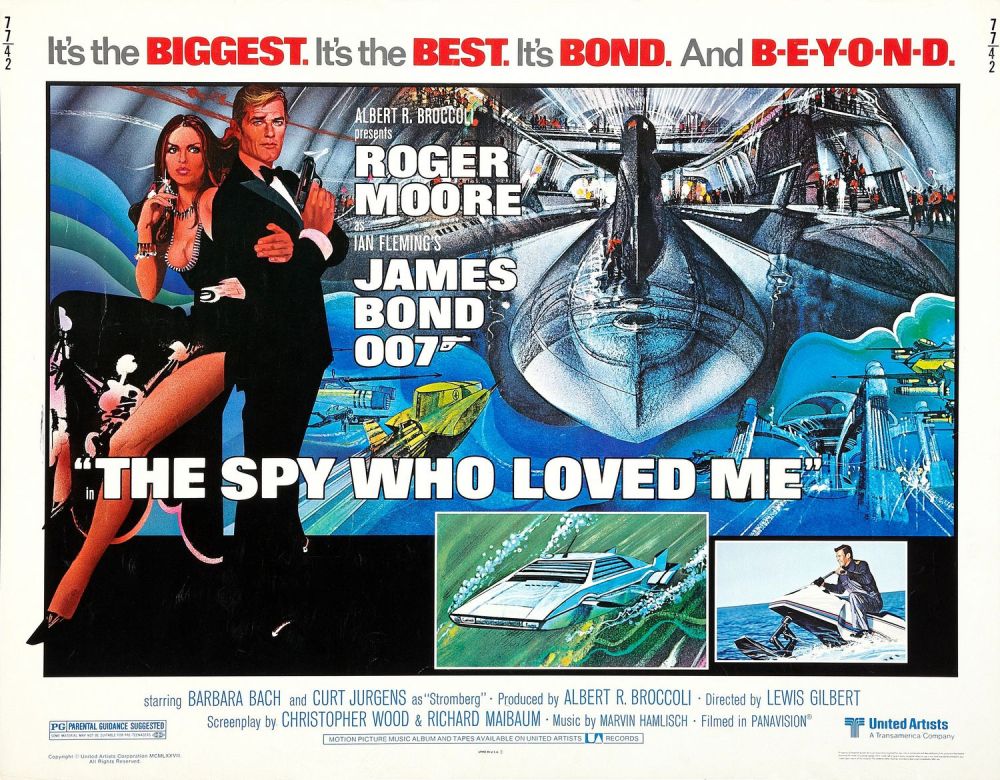 After the disappointment that was The Man With The Golden Gun people were understandably worried about the follow up film; The Spy Who Loved Me. TSWLM was the first film in the series to not involve producer Harry Saltzman, and there was also difficulty securing a director. Eventually EON Productions went with You Only Live Twice director Lewis Gilbert. The next hurdle was a script, and Eon Productions were told they weren’t allowed to use SPECTRE or Blofeld in the plot due to copyright reasons. But, even after all of this they still managed to turn out what is, in many peoples opinions, the best of the Roger Moore Bond films. The plot of TSWLM is about an evil genius, Karl Stromberg, stealing submarines belonging to America, Britain and the USSR and then using them to trigger a war wherein the world will be destroyed.  Stromberg then plans to rebuild the world under the sea. OK, it’s a bit outlandish, but when you see Atlantis, Stromberg’s giant submersible evil headquarters, the plot suddenly becomes a lot more believable. It’s still far-fetched but the filmmakers make it seem as believable as possible. The plot is also vaguely similar to You Only Live Twice, but replaces satellites with submarines. I’m unsure as to why, perhaps its because the director is the same or it could be down to the many script problems early on in development. This doesn’t show through however, and TSWLM is lot better than You Only Live Twice.

Roger Moore’ performance as Bond in TSWLM is his best yet. Nearly of his witticisms hit the mark, and the film manages to get Moore’s unique brand of Bond humour right. Moore manages to strike the line between charming and deadly. One minute he’s chatting up beautiful women, the next he’s knocking bald Egyptian henchmen off of buildings. This Moore at his best. Just because he is the Bond actor best at humour, it doesn’t mean that should be all he does. TSWLM shows us he can also be bad ass when the need arises. The Bond girl in this film, Anya Amasova, is a KGB agent played by Barbara Bach. She is one of the most unique Bond girls, as she’s not quite an enemy, but the KGB certainly weren’t allies. It also doesn’t help UK/USSR relations that Bond killed her boyfriend and now she wants him dead. She is one of the best and most interesting Bond girls and is a welcome change from the terrible Bond girl Goodnight from the previous film. The villain of the piece Karl Stromberg, is slightly underused in the film but is still played ably by German actor Curd Jurgens. He a classic, insane Bond villain and even has a deformity; his webbed fingers. It does seem that his webbed fingers were only added last minute to check off  the deformity box on the ‘how to make a Bond villain’ checklist. Dr No had metal hands, Largo had an eye patch, Blofeld had a huge scar on his face, Alec Trevelyan had a huge scar as well, Zao has diamonds in his face and Silva had a nasty incident with some cyanide. The list goes on and most Bond villains have a cool deformity. Stromberg’s webbed fingers are pretty low down that list but at least it’s better than Scaramanga’s third nipple.

One of the highlights of the Bond canon, introduced in this film, is steel toothed henchman Jaws. Everybody knows who Jaws is, even non James Bond fans and TSWLM is his best appearance. While he becomes a bit over the top in the generally over the top film Moonraker, in TSWLM Jaws is a funny, awesome new addition and adds to some of the best fight scene’s in the movie. The fight in an Egyptian building site is a true highlight and is a key example of James Bond films mixing comedy with action and doing it well. Richard Kiel’s performance as Jaws is great, and he is one of the only truly intimidating Bond foes, and they couldn’t have cast anyone else. But the true highlight of the film and perhaps one of the most well known scenes in Bond history is the Lotus Esprit chase which goes from the roads to underwater. This scene is amazing, and the direction is brilliant, it’s some of the best action in Bond history and is defiantly one of the more unique chases in the franchise.

The Bottom Line: The Spy Who Loved Me is the perfect Roger Moore Bond film. It’s a great balance of humour and action, and the action itself is some of the best or the era. The Bond girl is perhaps the best ever, or at least she’s up there, and she is miles better than most others from the era. The plot is far fetched and ludicrous and the villains are insane, but this is classic Bond and I wouldn’t have it any other way.