Grant Morrison’s run on Animal Man (from 1988 to 1990) is probably the best comic you’ve never read, or most likely even heard of. He popped up in some stories back in the sixties and was then more or less forgotten. And it’s difficult to disagree with the decision to shelve him – he wasn’t all that interesting and felt like the culmination of a comic book industry that was almost out of ideas. You have Batman and Spiderman, now meet Animal Man! He had little to offer. That is until DC Comics went headhunting across the pond for new and exciting talent. They happened upon then up-and-comer Grant Morrison and gave them the chance to reinvent any character from DC’s back catalogue. Morrison, who loves these forgotten c-list heroes from DC Comic’s forgotten stories, chose Buddy Baker, AKA Animal Man.

The project began as a four-issue series, but ended up being given the green light for more issues after the initial success of this first story. By Grant Morrison standards, this tale is quite conventional – though it is way more thought provoking than you might except. In this tale we’re introduced to Buddy, a man who can borrow the ability of any animal and use them to fight crime (often saving animals in the process). This includes the strength of an elephant, the flight of a bird, breathing underwater like a fish, and pretty much anything else you can think of. So despite the corny sounding name, Animal Man is surprisingly one of the most powerful heroes in the DC continuity, especially as the stories go on. He had some success back in the day as a superhero, but when we meet him he’s firmly on the c-list. Over the first few issues, he starts getting re-involved with the superhero business.

Whereas other heroes have crazy secret identities and double lives, Buddy doesn’t really bother with that. He seem concerned with hiding his identity, and simply lives at home with his wife and children (though their home does receive some JLA upgrades after an attack by Mirror Master). His main drives are animal rights and the environment, even been disregarded as an eco-terrorist by some in the media. It’s clear that Morrison cares deeply about these issues, and to see something so focused on saving the environment from thirty years ago really puts the naysayers in 2020 into perspective. In fact, his first real hero job is investigating a break-in at an animal testing facility, and this focus on animal rights continues all the way through the run. Whatever impact it has on you, you’ll probably come away appreciating your cat a little bit more.

So the unabashed way Morrison writes about many social and environmental issues – with Buddy being targeted for these far-left views –  is one thing that makes this comic so very interesting, but that’s just the start of it. Clues are put in place early on that things are not quite right in Buddy’s world. Issue five, ‘The Coyote Gospel” is the first sign, as it deals with a giant coyote named Crafty – a clear allusion to Wile E. Coyote – who is forced to live and die and live and die in perpetuity in his cartoon world (a la Looney Tunes), all for the amusement of his creator. That is until he reaches the “real” world. The comic ponders the idea that creators and artists are putting these poor characters through absolute hell, all for the purpose of entertainment. Storytellers are cruel, and these characters are their victims. And this idea soon becomes apparent in Buddy’s own life.

As the 26-issue run unfolds, things get more and more meta and becomes a commentary on the world of comic books – something Morrison is clearly a huge fan of dissecting. The overarching plot continues from the ideas laid out in “The Coyote Gospel” and considers what happens to the characters who disappear out of the continuity, in the massive universe-changing crisis’s that DC is so fond of – where a character will appear with new backstory, motivations, and appearance. It’s part and parcel of comic books, but Morrison acts us to consider the characters regulated to obscurity, to the limbo until a writer decides to reinvent them or reintroduce them to the DC universe. It’s a fabulously wacky idea, and it takes a mix of hallucinogenics, aliens, and twenty-odd issues to come to fruition, for Buddy to finally realise what’s going on.

Eventually, Buddy meets his maker. Or his writer. After tragedy after tragedy, he has the chance to confront Grant Morrison himself. He wants to know why someone would put him through the pain he’s experienced. After all, how would you feel if your life was just a series of stories, appearing once a month with little connective tissue to give them meaning or coherence? How would you feel if people around you died or decided to hate you? All for the sake of sales and making an entertaining story. Saying anymore would spoil the final issue, but rest assured that this final confrontation is not only the best thing Morrison has ever written, it’s possibly the best single comic I’ve read – and it all comes after 25 thoroughly excellent issues. 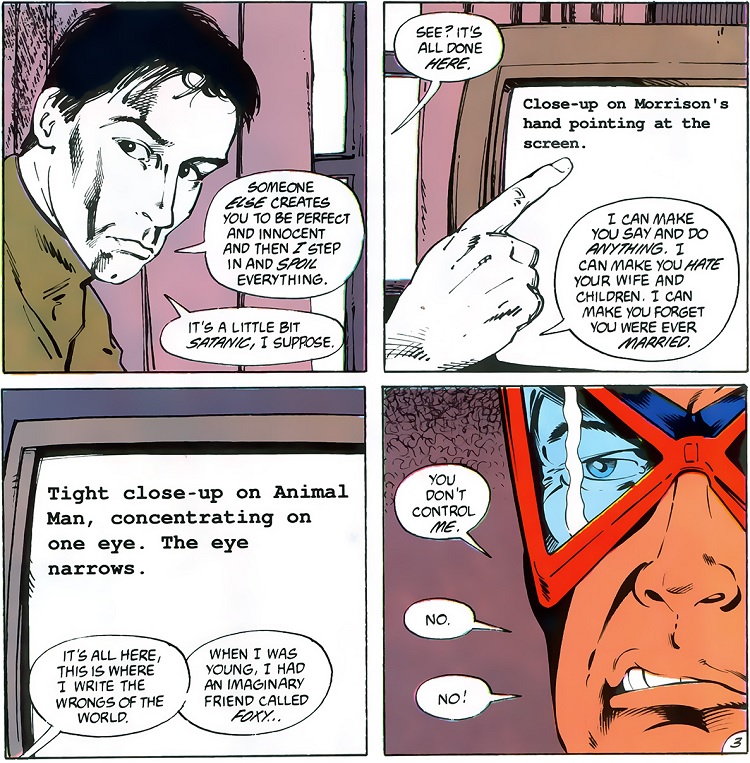 This sort of weirdness allows the writer and artist to get away with some things I’ve never seen in a comic before. Characters are written out of existence, from their full colour drawings, to the skeletal line drawing underneath, to be written out of the continuity completely. Characters will break free from their boxes on the page, to the white space behind. At one point, a character turns and faces you, the reader, after becoming aware of your presence. Every couple of issues I was astounded by something new, something insane that I’d never seen before.

I think another reason this works so well is that it’s entertaining and ridiculously readable. I adore Morrison’s work, but I admit that some of it can be a little off-putting, or difficult to understand – just look at the backlash Final Crisis received. But Animal Man is just fun. It hits all the beats for an entertaining superhero comic, and then some. There are self-contained issues and arcs within the 26-issue run, but none of these are throwaway. Morrison always gives it their all, and it’s pretty simple to wrap your head around. Obviously, I think you’d get the most out of it if you enjoy comic books as a form, as it plays around with the format a lot. But at it’s core, it’s a really great story about an unusual hero and his family. For a hero that initially could have been one of the most forgettable and run-of-the-mill character in comics, a carbon copy of more successful characters,  Animal Man is anything but.

If you have any interest in comics, give this a read. I promise you won’t regret it.