“You know what a sundown town is? Well we’re a sundown county.”

Based on the 2016 novel by Matt Ruff, Lovecraft Country is the new show from HBO, with some very talented people behind the scenes. And they have spared no expense. Coming at possibly the best time for a story like this, Lovecraft Country follows Atticus Freeman as he travels across Jim Crow-era America to locate his father, who has mysteriously disappeared. Anyone familiar with the book will know that this is only the beginning, and things get very strange, very quickly.

The episode opens with Atticus Freeman (Jonathan Majors) returning home. Not long out of the army, after serving in the Korean War, Atticus is called home to Chicago by the disappearance of his father. With the help of his Uncle George (Courtney B. Vance) he figures out where his father might be; Lovecraft Country. Joined by old friend Letitia Lewis (Jurnee Smollett), they set out to find him. A few other characters are introduced to us in these opening scenes, but I’ll save talking about them until later episodes. If the show follows the format of the book, these characters will be going on adventures of their own in the weeks to come. The book is basically eight interconnected stories, all following this cast of characters and all connected by a plot thread running through the middle. The events of ‘Sundown’ are the first half of the first story, so it’ll be interesting to see how the show tackles this format and which parts, if any, it decides to trim. 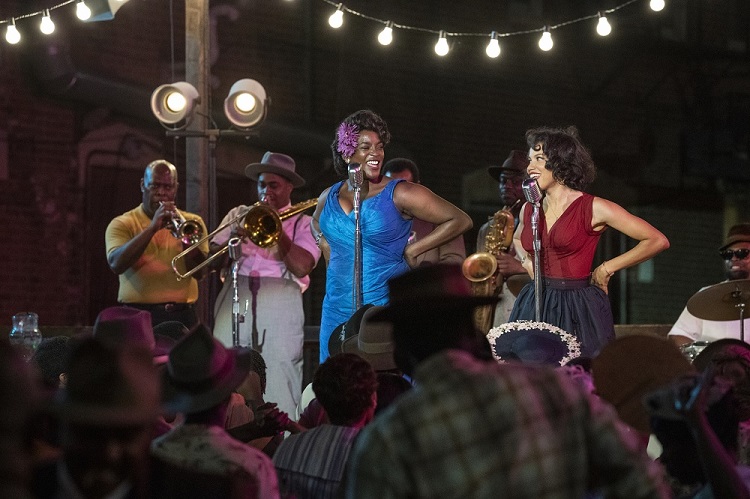 Though it’s got Lovecraft’s name right there in the title, and the show doesn’t shy away from his brand of otherworldly horror, the things that go bump in the night perhaps pose the least threat to a group Black travellers in 1950s America. In fact, this very first episode makes sure we know that it was the people of this time period that were truly terrifying. It doesn’t matter how many eyes the shoggoths have or how many people are torn to pieces (and the show doesn’t skimp on the gore), nothing is more unsettling than the threats of a white sheriff, or the sideways glances of a group of white supremacist hillbillies. And the racism on show here is often far more subtle than that. The heartbreaking shot of a father trying to get ice cream for his child, but being ignored at the “Coloured” counter. Or the giant lit up billboard for Aunt Jemima pancakes, a mascot deeply entrenched in racism (who was only retired very recently). Thanks to a phenomenal attention to detail and the budget available to the team behind the show, Lovecraft Country (like Watchmen before it) brings this horrific time in our history to life in a way that is utterly convincing.

The show acknowledges its debt to Lovecraft multiple times, but it is well aware of the vile views of the man himself. For my money, H.P. Lovecraft is one of the greatest writers of all time. I’ve been a huge fan of his work for a long time, and over this year I’ve made an effort to read or listen to as much of his writing as possible. But when enjoying the stories by Lovecraft, you have the tricky job of separating the man from the work. He wasn’t racist in that 1920s “everyone was racist” sort of way, he was a Hitler-defending xenophobic nutjob. In Lovecraft Country, the showrunners are tackling that legacy head-on, showing us a world of cosmic horror through an African American lens. Lovecraft’s disgusting essay is mentioned by name in the show, and the character of Atticus is struggling with these stories he loves, written by a man that would definitely despise him. His work has been influential on countless writers and artists, and this show is the latest and most high-profile attempt at reclaiming that legacy. And yeah, Lovecraft would have hated it.

I also want to acknowledge that this is how you do a pilot episode. It sets the stage for the events to come, not rushing over the character introductions but also not giving us a ton of exposition. And on top of that, it’s a damn exciting episode in its own right. We have monsters in the woods, two chase scenes (one action-packed, one ridiculously tense), and even a musical number. That’s not even mentioning the opening scene; a dream sequence that sees Atticus at war against aliens, UFOs, perhaps even Cthulhu itself, and meeting the Princess of Mars. And it doesn’t feel overstuffed – it feels confident. It’s announcing its arrival and it is impressive.

So it’s a hell of an entrance for Lovecraft Country. It is a great example of why some thinks should be adapted. I really liked Matt Ruff’s book, but this first episode shows the power of television. It presents this awful time period to us using visuals and voiceover. Be that the aforementioned Aunt Jemima billboard, the image of Black Americans on the breadline, or the James Baldwin speech that soundtracks these. It doesn’t feel like you’re being taught something, and it’s not telling you how to feel, its just showing you how things were and demonstrating that it wasn’t always outright abuse and violence facing these communities. There were (and still are) countless examples of racism that are so often just a part of the American way of life. And in an era of extreme racial tension, and some cringe-worthy messages of support from the people in power, this show and it’s gorgeously realised story of the Black experience in 50s America couldn’t have come at a better time.

It looks like things are going to get a bit cult-y next week. I’m looking forward to the introduction of the The Order of the Ancient Dawn and learning more about the mysterious Christina Braithwhite (Abbey Lee) and her magical Silver Bentley.