“Know first who you are, and then adorn yourself accordingly.”

Pretty much no one watched The Leftovers when it first aired, despite it’s critical acclaim. It has since gone on to be considered one of the (if not the) greatest TV show of all time, with most critics citing it as their number one. Learning from his mistakes from the tail-end of Lost, showrunner Damon Lindelof dives once more into the mystery here. But more so than the mistakes and unanswered questions, Lindelof builds on the things that made that previous show so great; the big questions, theological debates, the wackiness, the thrilling science-fiction madness of it all. With an outstanding all-star cast, A+ production values, and more depth than any other show I’ve seen, The Leftovers just might be the best TV show of all time.

I’m going to attempt not to spoil it in this review, but there will be hints and clues. This is just my thoughts on the show’s three season run, on what made it so very, very great.

The logline for the show – which in no way does it justice – is as follows: one day, 2% of the world’s population disappears. It might now sound like a lot, and I suppose it’s pretty tame as far as world-ending threats go. But it’s still 140 million people who just disappeared. They’re not dead, they’re not alive. They’ve all just gone. The show’s main focus is on how the key characters deal with life after such an event, and the constant existential angst that comes along with it. It’s perhaps for this reason that the first season was written off by many as being too grim. It is unrelentingly depressing, especially for the first few episodes. But stick with it, because that despair leads into some the show’s greatest mysteries, into the themes at it’s heart.

The main character is Justin Theroux’s Kevin Garvey. Like Lost, the show is very much an ensemble story. But Theroux plays the same sort of central role as Matthew Fox did as Jack Shepard in that show. When the show begins, he’s chief of police in a small New York town, trying to keep his family together in the wake of the departure. I read a few reviews where people said he was initially the least interesting character in the show, but his arc through the three seasons is truly outstanding. Kevin goes from put-upon police officer to the (possible) messiah in 28 episodes. Throw in a couple of trips to a purgatory-like world, delusions and hallucinations, and a complete psychotic breakdown and you have one of the most compelling characters on television. And none of it would hit as hard if it wasn’t for the Theroux, who comes out of nowhere and delivers masterful performance after masterful performance. He navigates the Kafkaesque situations and otherworldly coincidences with an almost permanent look of suspicion. He’s trying to retain some sense of normality in the wake of The Departure, but the world around him slips increasingly into the surreal, and events move beyond his control.

But some of the show’s very best episodes take the focus away from Kevin, and follow one of the many interesting side characters. My favourite of these are the episodes that follow the dutiful man of God, Matt Jamieson (played by local lad and former Timelord Christopher Eccleston). Every season sees one surreal hour dedicated solely to this put-upon character. As the religious voice of the show, Matt is the John Locke of The Leftovers (the crazy survival nut from Lost, not the 17th century philosopher). He sees a greater purpose behind it all; he views The Departure as the biblical rapture. Suffice to say, his faith is tested as the story unfolds. I think a lot of the criticism of the show as being bleak lands squarely at the feet of Reverend Jamieson. With a comatose wife needing 24-7 care and a nihilistic cult on his doorstep, his life is difficult to watch and — as the show continues and the tone lightens — his story doesn’t get any easier to witness. But it’s important to note that it’s always watchable. It always means something, even if the interpretation is left open to you.

This is a show that thrives on its cast of characters and the superb actors playing them (making it all the more frustrating that these performances were continually ignored by the awards). There are too many to go into here. Ann Dowd as the evil Patti Levin, Liv Tyler playing the villain as Meg, Scott Glenn as Kevin’s scowling and possibly insane father, not to mention a whole town’s worth of new characters in season two (Watchmen‘s Regina King is fantastic). The best character throughout the show’s run is Carrie Coon’s Nora Durst. In a world where 2% of the population disappears, she’s come out of it worse than most. In the Departure, she lost her husband and both children. This has made her something of a local celebrity (and earned her the moniker “Nora Worst”). When we first meet her, she’s paying prostitutes to shoot her in the chest as she wears a bulletproof vest – one of the many ways people are coping in the post-Departure world (and not the most extreme response either). Performance wise, Carrie Coon gives a performance that rivals the best we’ve ever seen on television; simultaneously fragile and wounded, but also pretty badass, taking matters into her own hands and holding together. And it’s this relationship that exists at the core of the show. 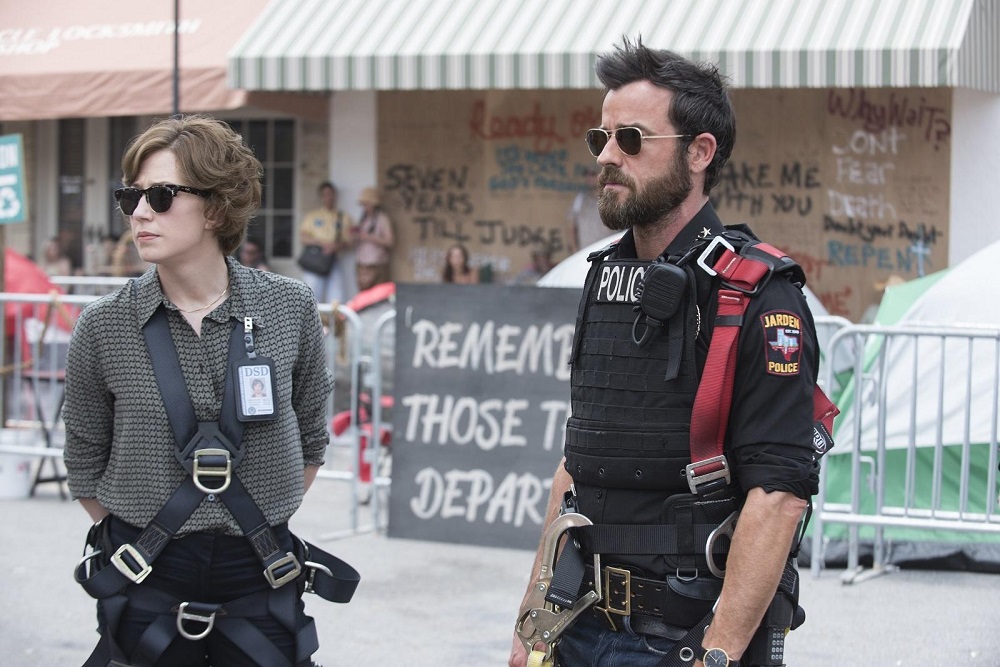 The show has been described as essentially being a love story by Lindelof, and I think that’s my favourite interpretation. The relationship between Kevin and Nora is not healthy. After all, one breaks their arm in car doors and the other suffocates themselves with a plastic bag (two more coping mechanisms in this post-Departure world). But ultimately it’s this romance, this love that may be unhealthy but that is also between two characters who need each other more than anything else. It’s a love that spans vast swaths of time and more than one alternate dimensions (if you choose to believe). Lindelof himself said this love story is “a little bit corny but I’ve never had any issues with corny.” And it’s that drive, that wish to see these two characters come together and live happily ever after that remains the driving force throughout the three seasons. Even as the world ends around them, as they fight and fall apart, Kevin and Nora will always find one another again.

I’ve drawn a lot of comparisons here to Damon Lindelof’s previous work. But, in a lot of ways, The Leftovers feels like an answer to the criticisms Lindelof faced with Lost. The Leftovers deals in mysteries, as did that previous show. But here, Lindelof is saying we can decide for ourselves. Didn’t like the ending to Lost? Didn’t like the answers the show provided for some of its biggest mysteries? Well lucky you, because you can decide your own outcome here. Everything we see in this show happened, if you want to believe it did. Or you can choose to believe what you want. A lot of the time, as the finale proves, it doesn’t matter what the mystery is or what any of it means; as long as you believe. Some characters ascribe meaning to the mysteries, religious prophecies and messiahs. Some claim they are meaningless. You decide. 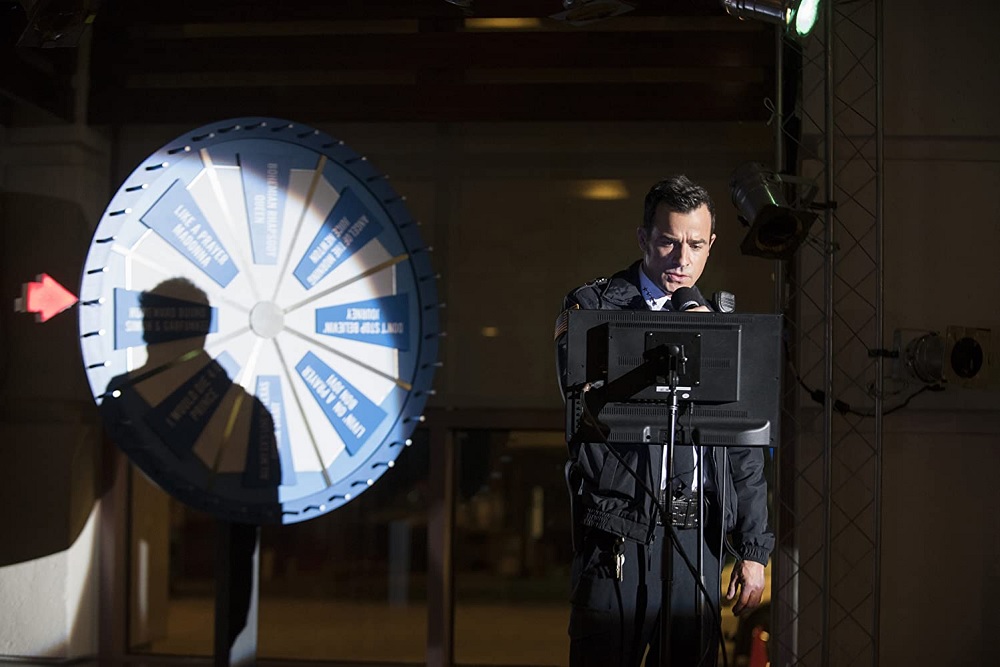 At it’s core, the mysteries are a distraction. Red herrings to turn your attention away from the real struggles of these characters. For example, Kevin navigating the afterlife is more than it seems on the surface. He’s dealing with his demons, killing them (quite literally) and destroying the part of himself that is causing him pain. Again, this is my interpretation. The appeal of the show is that nearly all of our fan theories can be true and false simultaneously. Unlike Lost, no one is going to be disappointed by the answers here. Because they’re left up to you to decide. Or not. As the title theme says – “I think I’ll just let the mystery be.”

No show has moved me, or thrilled me, in quite the way The Leftovers has. Maybe it’s the threat of the current global pandemic, but more likely it’s the sheer brilliance on show here. Lindelof went one to deliver another blinder of a show with Watchmen, and even the finale of Lost is getting a revaluation on it’s tenth anniversary. But it’s The Leftovers for me that demonstrates just what television is capable of when it’s willing to take risks.

The characters on this show, and the drama they find themselves wrapped up in, are some of the most compelling ever put to screen. And at the end of the day and after 1500 words of rambling, it’s actually really difficult to put your finger on why that is. I found myself describing an episode to my partner after watching, and it sounded absurdly complicates. It’s got more to pick apart than any show I’ve seen – or it could be the simplest show in the world. It depends on how you interpret it. And that’s the mark of a excellent piece of fiction in my eyes.