“If there’s one thing I’ve learned as a member of Batman, Inc. You’re never alone with a Bat-Signal.”

Batman has gone global. After making a spectacular return from the dead, Bruce Wayne decided that there needs to be more than one Batman. In fact, he settles on there being a whole team of them, all over the world. Letting Dick Grayson continue as the caped crusader back home in Gotham, Bruce travels the globe, recruiting heroes who have all in some way been inspired by the bat. He trains them and gives them the resources they need to fight crime from their corner of the planet, as well as drafting them into his own Bat-Army.

Batman Incorporated is a rip-roaring adventure, there’s no doubt about it. Morrison takes Batman out of the comfort of Gotham and places him into a series of locations around the world, with almost all of them being successful. Each arc — spanning one, two, or three issues — feels almost like a different genre, depending on the country it’s set in. You have the wacky manga-inspired issue #1 and #2, the Western-set #7 ‘Medicine Soldiers’, and the trippy acid-infused final issue, which plays out like the 1967 Casino Royale Bond spoof. And behind this premise, there is the rise of a mysterious criminal organisation named ‘Leviathan’ tying it all together. It’s messy, but it’s classic Morrison at his pulpiest.

The first story sees Batman travelling to Japan with Catwoman to recruit Mr. Unknown into the Batman Incorporated army. But before he’s arrived, Mr Unknown is murdered by a villain named Lord Death Man. With a name that even Suda51 would find a bit on the nose, Lord Death Man sets the tone for the comic. He’s a forgotten Silver Age villain, as is par for the course in a Morrison story, who I think was last seen in the Batman Manga. Its ridiculous, but I cracked a smile and didn’t stop smiling throughout as Batman and Catwoman took on a giant squid (in what I am positive is a cheeky nod to Japan’s favourite form of tentacle-based entertainment) and sent the immortal Lord Death Man into space. The whole thing has a goofy charm, like Batman: The Brave and the Bold. But with more metaphysics and references to arcane lore.

After recruiting Batman of Japan, the journey goes to Argentina to recruit El Gaucho – who has appeared previously in Morrison’s work and is always a welcome presence. Things only get weirder too, as Morrison starts messing around with forgotten Batman lore that I swear only he remembers. Along the way, we meed The Hood, a British Batman who has some pretty strong opinions on the Argentinian El Gaucho. I mean, this arc ends in the Falklands, of all places. (Morrison wears his politics on his sleeves and even manages to sneak in a few subtle digs to Thatcher in his Batman epic).

After that, we venture to South Dakota, for an excellent story set on an Indian Reservation with Man-of-Bats and Raven Red. Think Batman meets Wind River as Morrison turns his pencil to the injustices facing Native Americans. From the crime-ridden reservations, to the ramshackle mobile homes these people are living in, down to the simple fact that their Batmobile is a busted old truck, the story doesn’t shy away from the shit that’s been shovelled on the Native American community. It’s a surprising issue, made all the more effective by just being one issue. With Argentina, South Dakota, and then a village in Africa, you get the feeling that Morrison is using the idea of Batman Incorporated to show us the effect of Batman on these more forgotten, poverty-stricken communities. It’s a welcome look at the caped crusader. 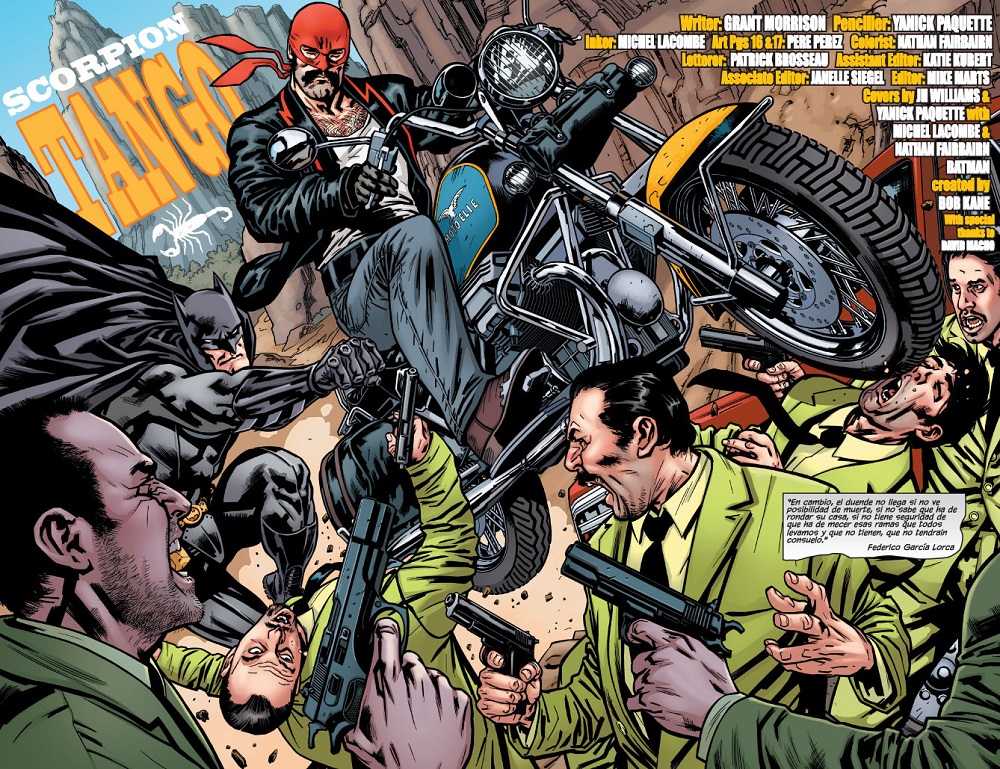 The volume ties the whole story together with a two-issue story named ‘Leviathan Strikes’. And you can tell the whole DC Universe was gearing up for “The New 52” at the time, because they just rushed this one out, slapping together two issues that should probably not go together. The first sees Batgirl infiltrate a school for would-be female assassins, which cleverly manages to subvert the tired cliche of sexy schoolgirl assassins, thank god, and delivers something really cool and interesting. The second is full-on Morrison, perhaps to a fault. A confusing head-scratcher that sees Batman discover the truth around Leviathan. Like a lot of Grant Morrison’s work, I appreciated it a whole lot more after I’d read it.

The only major misstep in this volume is issue #8, which I think gets the honour of being the worst Batman story I’ve read. Titled, worryingly, as ‘Batman and Oracle in: Nightmares in Numberland’ it begins with Bruce Wayne explaining ‘Internet 3.0’ to a group of shareholders. This new VR version of the World Wide Web comes with a Batman anti-virus program installed, that gets put to work when they’re attacked by a virus named The Worm Captain. So the plot is all over the place, but that’s never really bothered me. I live for this craziness in comic books, I love it. The problem is the artwork (see below). It’s, for lack of a better word, disgusting. It’s vomit-inducing. Artist Scott Clark goes for a gross computer-generated art style that I never got into. Apparently a reference to an old story from the 90’s titled Batman: Digital Justice, it looks more like The Lawnmower Man. Combined with the art, the issue is a tiring, nonsensical mess. There’s some plot in there too, so it’s not even like you can avoid it. It’s a disappointing issue in an otherwise fun collection. 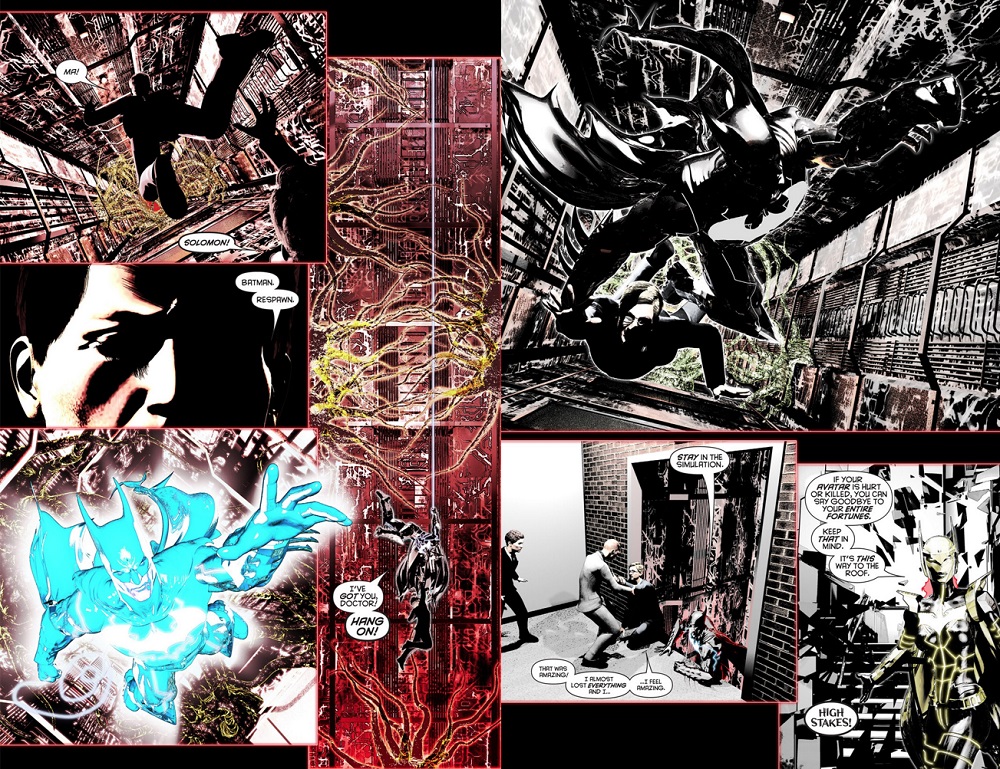 So overall, apart from the one misstep, it’s a success. It speaks to the testament of the Morrison’s writing and the great art elsewhere in the volume that it all outweighs the abhorrent ‘Nightmares in Numberland’. I’m currently reading the second volume of Batman Incorporated and it only gets better and better, hopefully seeing off Morrion’s exceptional run on Batman with style.

Also, because I’m a glutton for punishment (and because I can’t avoid a novelty issue) I’ve purchased Batman: Digital Justice. So look out for that review soon.