Whatever your opinion on Carol’s recent actions – and I’m a Carol defender – it’s difficult to ignore the consequences of her actions spiralling out of control for everyone around her. In this episode, Daryl is on a rampage to save Connie, thanks to Carol’s top-notch dynamite idea last week. But things go bad for him, in one of the intense Daryl scenes we’ve had in a while. Elsewhere, Beta takes a leaf out of the Michael Myers playbook and goes all Halloween on Alexandria. There aren’t many opportunities for a breather this week. 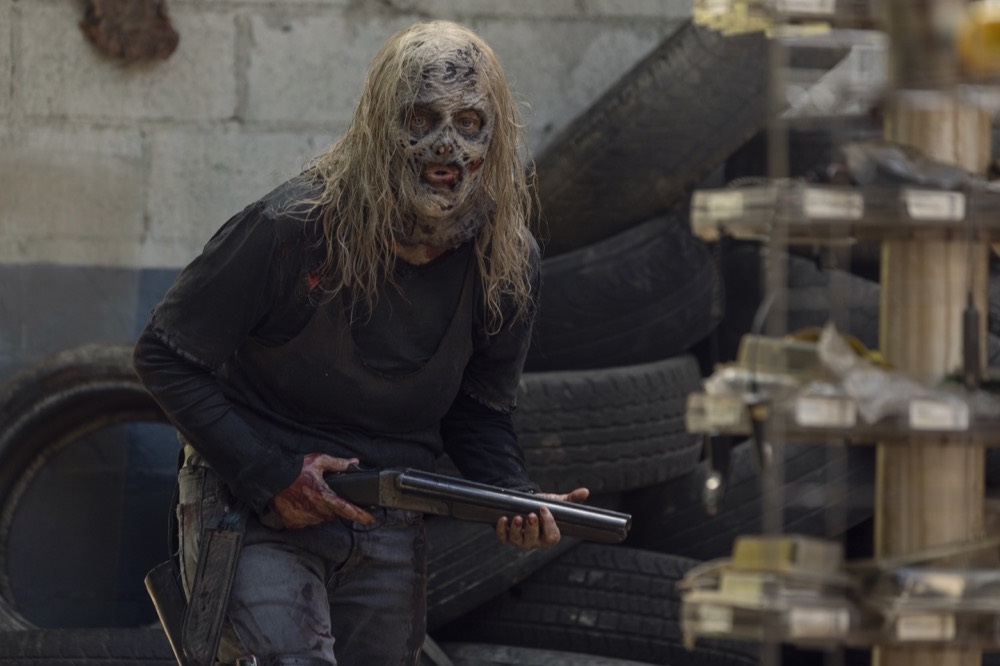 In his one-man rescue operation for Connie and Magna, Daryl finds a group of Whisperers wrangling some walkers for their herd. As luck would have it, Alpha is among them and vulnerable. Daryl actually makes a good go of it, killing her entourage and seriously wounding the top dog herself. But he takes a licking at the same time, getting a nasty knife wound to the face and a knife in his thigh. Alpha might not need Beta to protect her after all. Based on the preview, I was assuming he’d be captured – which I’m glad didn’t happen. It’s all to easy for a show like this to have characters getting captured, then freed, then captured again, ad nauseam. (Just look at Lost). But the wounded Daryl manages to escape to a decrepit garage/workshop – with an equally wounded Alpha hot on his heels.

Both on the verge of passing out, neither are up for a fight. Alpha tries to draw walkers in to finish the job, leading to Daryl having to use the knife embedded in his thigh to take one out – with plenty of squirting blood for good measure. It’s a messy scene, as the pair crawl through the dirt and trade barbs back and forth. (I especially love Alpha’s “I can’t hear you boy.” in her signature Kentucky fried drawl). Obviously, I never thought Daryl would kick the bucket here. Norman Reedus is the (well-publicised) new face of the show so they’re not going to kill him. Alpha, on the other hand, I wasn’t so sure about. When Lydia shows up towards the end, it could have gone either way. Appearing almost as a vision, Alpha places a knife to her chest and asks her daughter to finish it. I’m glad Lydia didn’t do it. In a way, it’d give Alpha the final victory, proving that the two were the same after all. But Alpha’s weakness has always been Lydia. Now that the relationship is more or less finished, she’s going to be on the warpath more than ever.

But Alpha’s only one part of The Whisper hierarchy. Beta’s on his own crusade, infiltrating Alexandrian to retrieve Gamma, the Whisperer turncoat. Thanks to double-agent Dante, the skin-wearing cult now have a secret entryway into the town. Beta goes in alone, emerging from a recently dug grave like a zombie from a retro horror film. The entire sequence of Beta stealthily creeping through Alexandria owes a debt to the horror and slasher films of yesteryear. Beta moving through the houses, taking out the residents inside, is something straight out of John Carpenter’s Halloween. The excellent direction by Bronwen Hughes (Breaking Bad, Better Call Saul) really ups the tension too, as we see Beta’s rampage from outside a house, through narrow windows. He mainly kills background characters, leaving them to turn and cause havoc. But he also takes out fan-favourite Laura, the badass saviour-turned-Alexandrian, with a toe-curling execution.

Gamma is proving to be an interesting character. And she provided the show with a difficult question. If she truly has changed her ways, how on earth can she prove this to the Alexandrians? Gabriel especially is not prepared to trust another one of them after Dante. And anything she tells them could just be a lie to get more information. Luckily, Beta’s attack gives her a chance to prove herself, as she shows she’s willing to sacrifice her own life for Rosita. She eventually gets back to Alexandria after Gabe and the boys ambush Beta on the road, and now she has a solid gold, airtight example of how changed she really is. She’s going to be an interesting part of the show going forward, and it helps that Thora Birch is just a damn fine actor. But her redemption does mean Beta is going back empty-handed to an Alpha who is already beyond pissed off.

Before I finish this week’s review, I want to mention how great Gabriel is. One of the most boring characters in the comic (who was killed off in a way that suggests even Robert Kirkman forgot he was still around) his story has been touch and go. But after his brutal execution of Dante, he’s long past giving a shit. And this episode demonstrated that, despite all that, he’s still feeling close to God. It’s a cool contradiction, the holy man who’s willing to kick ass and take no prisoners. And Seth Gilliam is absolutely killing it right now. Between the eye and the hat, Gabriel has become the coolest character. Who saw that coming?

Next week’s episode looks insane. Titled ‘Morning Star’, it sees the factions entering all-out war. And Daryl is caving in some heads with the titular medieval weaponry. I can’t wait.