Quantic Dream’s Heavy Rain originally released for the PS3 all the way back in 2010. The mystery thriller received critical acclaim from both audiences and critics, who praised the design and narrative, issuing a new era for story focused games.

But nearly a decade has passed, and the gaming community has changed a whole lot. Great story and characters are no longer a rare occurrence, with the likes of The Witcher 3 and Red Dead Redemption 2 enticing us with believable, mature narratives on the same level as some of best work from the world of TV and cinema.

And, seeing as Heavy Rain has just recently released on PC through the Epic Store (oh yay…) I thought we could see if lead writer David Cage’s magnum opus still holds up in the modern gaming world.

Set in an unnamed American city (Philadelphia was the main inspiration) which is being tormented by a string of child murders. Always found drowned in rainwater and origami figure in their hands, the media has dubbed the culprit the “Origami Killer”. Pretty heavy stuff, right? Well, don’t expect the game to keep the serious tone down for long. I get the idea the that David Cage drew inspirations from filmmakers such as David Fincher, especially the fantastic SE7EN, but it comes more across like SE7EN if it had been directed and written by Tommy Wiseau. Don’t let that put you off though, I mean it in the best possible way. Heavy Rain is hilarious, and you absolutely have to play it.

I won’t talk too much about the plot, seeing as it is a murder mystery and don’t want to give away the twist, especially with said twist being absolutely ridiculous and making no sense within the realm of the game, but it’s still bat-shit crazy enough that you have to experience it for your self.

You play as four different characters, changing every other chapter. You got Ethan Mars, your run of the mill architect, that even though he’s supposed to be American speaks with a slight Irish accent. Ethan’s son Shaun has been kidnapped by the Origami Killer, setting the game’s plot into motion. Next up is Scott Shelby, a private investigator so cliched that he actually wears a long brown trench coat, drinks whiskey while looking mournful, and sleeps behind his desk despite the fact that he works out of his apartment and his bed is only a few feet away from him. Then you got Norman Jayden, an FBI agent who, depending on the scene, decides that he’s suddenly got a thick Boston accent straight out of The Departed. Jayden also has super high-tech AR glasses that literally no one ever questions or asks about.

The last character is Madison Paige, a journalist who suffers from chronic insomnia. Madison is the most problematic of the four. On one hand, she’s the most believable and well-acted, even making some of the terrible dialogue sound natural. But, the other hand, a lot of her scenes have a real exploitative nature to them. From her introduction scene featuring her being attacked by two home invaders while half-naked, to her being forced to strip for a gross club owner, to her being drugged and tied up in a basement by a creepy old surgeon. Truthfully, it was kinda ridiculous the amount times the threat of rape is held over her head. It doesn’t help when you look at how David Cage treats his female characters in his other games as well.

The thing these four characters all have in common is quite simple: None of them speak like actual human beings. The dialogue in this game is hilariously bad, it feels like it was written in a different language and then poorly translated into English. It’s almost on the level of Nolan’s The Dark Knight Rises when you’re there thinking to yourself “Did no one read these lines before David Cage threatened them into saying them out loud?”

The gameplay of Heavy Rain is a weird one, as it is not actually “gameplay”. It’s more of an 8-hour cutscene with quick-time-events to make sure you’re actually paying attention. The best thing about these QTEs is when you fail them, and get to watch your character fall over, or more likely, fail at completing basic everyday tasks. A few personal favourites are when Ethan’s wife asks him to set the table with her parent’s expensive dinner plates, and then if you move the analog stick to fast, Ethan throws the plate like an absolute lunatic. Another great moment is when Norman Jayden finds himself chasing a suspect through a supermarket, failing the QTEs here has him sliding across the floor on spilled ice cubes and fighting live chickens for some reason. It’s bizarre. When was the last time you saw a live chicken in a supermarket in an urban US city? But it doesn’t matter. It’s the weird shit like this that makes Heavy Rain so playable. 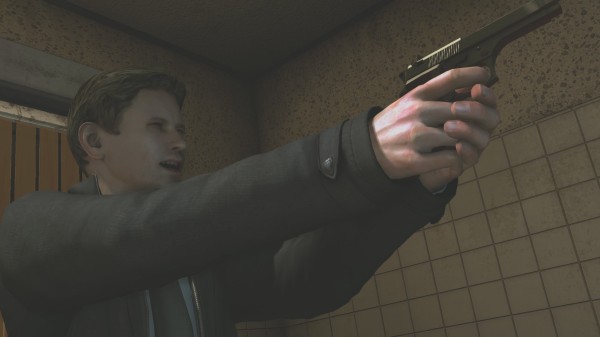 While I have been mostly mocking of Heavy Rain so far, I will give credit where credit is due and admit that there are some pretty great set pieces. One of the highlights is a scene where Ethan is forced to cut one of his own fingers off. It’s expertly done, with great camera work to really make you feel Ethan’s fear. The fact that you have to choose how to do it as well adds a lot of tension, making you choose between various sharp implements, finding a piece of metal to heat up and cauterise the wound, remembering to disinfect. I also have to mention Pascal Langdale’s performance here, whose horrifying screams makes it so much more real, even if he does still sound a little Irish. It’s the moments like this where I can see what all the hype was about in 2010.

The PC port is pretty great all around. Though locked to 60fps, the game supports 4K and has full mouse and keyboard functionality (I would recommend a gamepad though). And, for a nearly ten-year-old game, it looks absolutely fantastic. The lighting, in particular, gives the exquisitely crafted levels a real and immersive feel. The character’s faces, too, look phenomenal, with the level of detail nearly on par with games released today. Though, I will mention the teeth. Everyone’s teeth. I can’t exactly tell you what’s wrong with them, but something definitely is. Each character must have the same blind dentist. 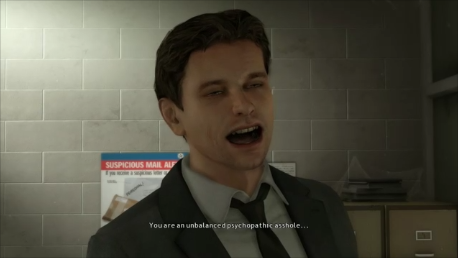 In closing, I’ll say that when I finished Heavy Rain I felt conflicted. The critic in me says that the gameplay isn’t really gameplay, that the dialogue is terrible, the narrative makes no sense, and the way Madison is treated is gross and misogynistic, but for some reason I still have to recommend it. From the terrible accents to the accidental slapstick comedy of falling a QTE, I enjoyed every awkward minute of this over the top mystery. Try and name another game about kids being drowned in rainwater that can make me laugh this much.

View all posts by Eddie Bumby