As far as I’m concerned, Disney’s The Rocketeer from 1991 is a definitive classic. It certainly played a key role in my formative years. It has everything you could want in a film! Action, adventure, romance, comedy. Back then, and still now, it feels like a successor to Indiana Jones with its rip-roaring, Nazi-fighting attitude and dashing yet bumbling hero. I recently decided to give the comics that inspired the film a shot. Written by the late Dave Stevens, I was shocked to find that there really aren’t a lot of Rocketeer books out there. Once you forget about the few written by other authors, this collection (containing two arcs) is it. 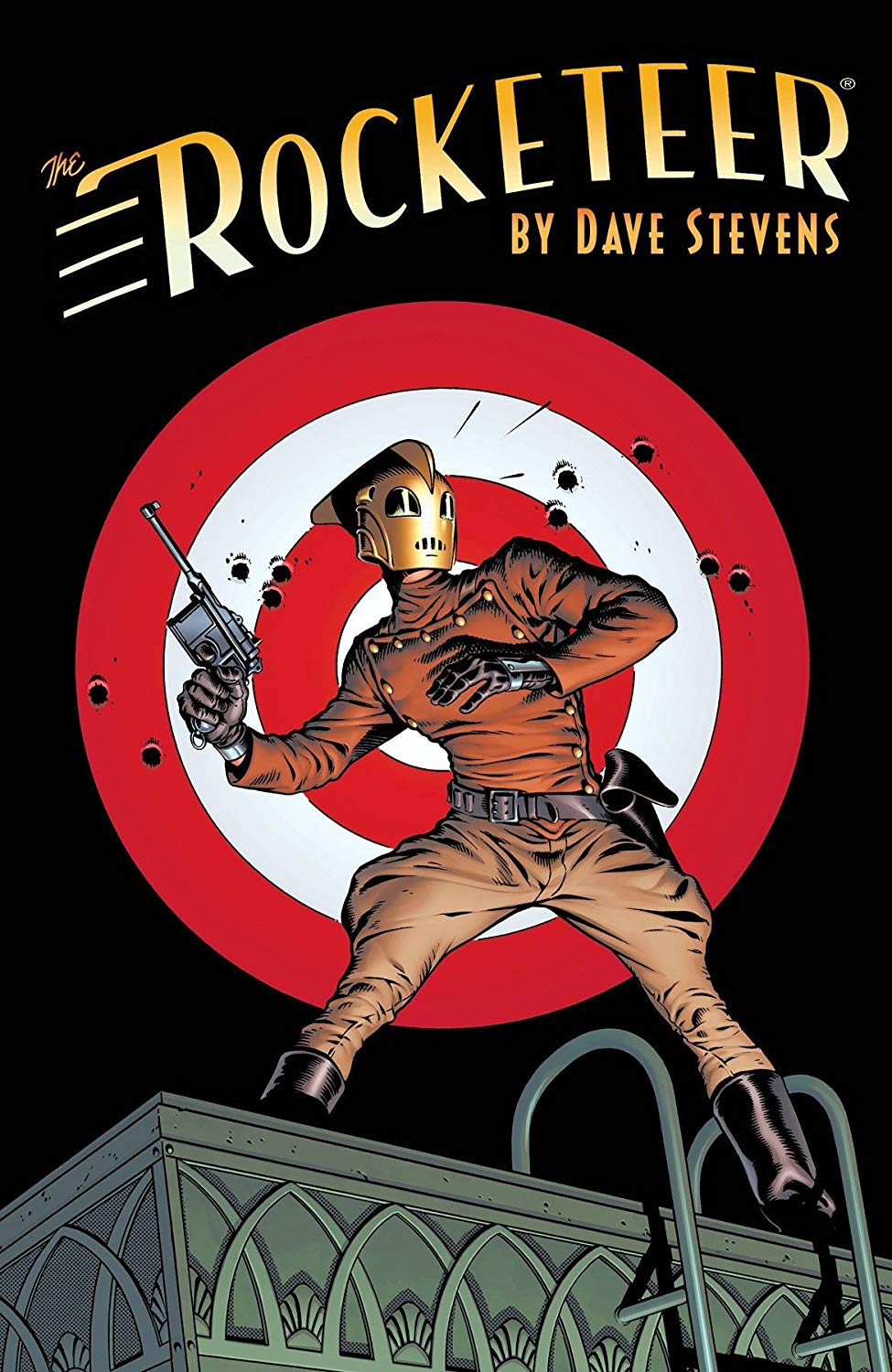 Rocketeer: The Complete Adventures contains the original run and the three issue follow-up titled The Rocketeer: Cliff’s New York Adventure. It looks like both of these stories served as inspirations for the film, with both containing bits and bobs that were subsequently used in the 1991 Disney version. The first part has the bulk; the introduction of the rocketpack, the backstory, the Nazi plot, the reference to Howard Hughes. The second part sees us introduced to Lothar, the giant with a penchant for snapping people in half, and has an autogyro exactly like the one in the film. Basically, though it changed some plot elements, the film was a very faithful adaptation – something I hadn’t been able to truly appreciate and something which makes the film even better.

But the comic came first, and I have to remind myself of that! The first story in the collection introduces us to Cliff Secord, a down-on-his-luck pilot who happens across a rocketpack when it’s left behind by gangsters in his hangar. Cliff at first seems like a pretty generic pulp hero – handsome, heroic, and with all the one-liners. Whilst paying homage to these tropes from pulp serials and stories that he clearly felt very passionate about, Stevens manages to subvert them. Basically, Cliff is a bit of an idiot. He bumbles around, either saving the day by accident or through sheer luck. It’s also interesting to note that he’s not always doing the right thing. He has opportunities to return the pack, but doesn’t and pays the price through either a wallop on the head or a pair of handcuffs.

But none of this would work if we didn’t believe in Cliff. And Stevens gives us a damn good reason why Cliff is going to all this trouble; to win back Betty, the love of his life. At its heart, Rocketeer is a romance story, and it’s successful because we want Cliff and Betty to get together (which makes the cliff-hanger ending of this collection even harder to bear.) Based on legendary pin-up Bettie Page (whom Stevens became close friends with in her later years), Betty is a knockout gal, who has no business being with a screw-up like Cliff. But like with other pulp stories, this dynamic works because they’re both so likable. And Betty isn’t a damsel in distress, waiting around for Cliff to save her. She does what she wants and it’s up to Cliff to keep up. And Stevens goes to great lengths to make us know she’s worth the effort.

The art is phenomenal and looks way ahead of it’s time. It’s so vibrant and exciting, every panel jumps out at you and I don’t think there’s a slow moment. Stevens’ main focus when it comes to the artwork is clearly Betty, and he gives her more than a few full-page spreads. The way he draws her is reminiscent of the pin-up style of art that was popular after the war, and some of it can be quite revealing (so watch out if you’re reading it in Costa like I was). But it never feels vulgar or gratuitous, it sidesteps that through Stevens’ very clear passion for this art and pin-up in general (especially Bettie Page). This is an art form, whichever way you look at it. And it conjures up the world of pulp, when the heroes were dashing rogues, and the women were exaggerated bombshells.

The first half of this collection is the origin, showing how Cliff got the rocketpack. The second takes place straight after and sees Cliff jetting off to New York, to win Betty back. Both adventures see Cliff battling over-the-top villains the Nazis in the first half and Lothar in the second), taking a few hits, but ultimately prevailing. There are a few hints throughout the stories about the characters (we find out about Cliff’s stint in the circus – which makes Lothar a far more personal villain), but not a whole lot. With it being like an old pulp serial, this isn’t an issue. But it does bring me to the one drawback of the collection – it’s too short. There’s not enough. Sure, the story of Cliff Secord has continued, one and off, into present day. And I’m going to continue onto these new books. But this is all we have from its original creator. This is all we have from Dave Stevens – and that’s a damn shame. It seems to me that he had the vision for these characters. And whilst I’m looking forward to seeing other interpretations, I’m unsure how they’ll compare. Still, from a purely quality over quantity point of view, it’s all hit and no miss.

Overall, this is a really great collection. The art is phenomenal and the recolouring in this collection by Laura Martin makes it feel like it was released over the last few years, not 35 years ago. If you like the film,this won’t disappoint. But if you like similar pulp stories, or adventure stories, or if you’ve always wanted to strap on a jetpack and soar – check it out.

2 thoughts on “What I’m Reading – ‘Rocketeer: The Complete Adventures’ by Dave Stevens”