“It was a grammatically correct death threat, yo.”

This week sees the hotly anticipated showdown between Daryl and Beta, as the two go head to head in a fight to the death. Elsewhere, the Kingdom is dealing with another group. And just when you think you’ve seen it all before, they go and do something completely different with this new group. It’s a tried and tested TWD plot structure, but it works and if it ain’t broke, don’t fix it.

When we first hear that The Kingdom is facing another threat, I’ll admit, I was concerned. Not that I don’t love some action, I just didn’t really want to see the characters go up against another band of bandits of villains. So Ezekiel and Carol discover the existence of a group called “The Highwaymen” and go to their meeting point. We see them all, theatrically dressed and spouting the usual villainous lines. But after a few tense minutes where it looks like The Kingdom is going to have to get their hands dirty again, the show pulls the rug right out from under us with a killer punchline. In her best friendly grandmother voice, Carol offers the Highwaymen to come join them at the fair, and watch a movie. 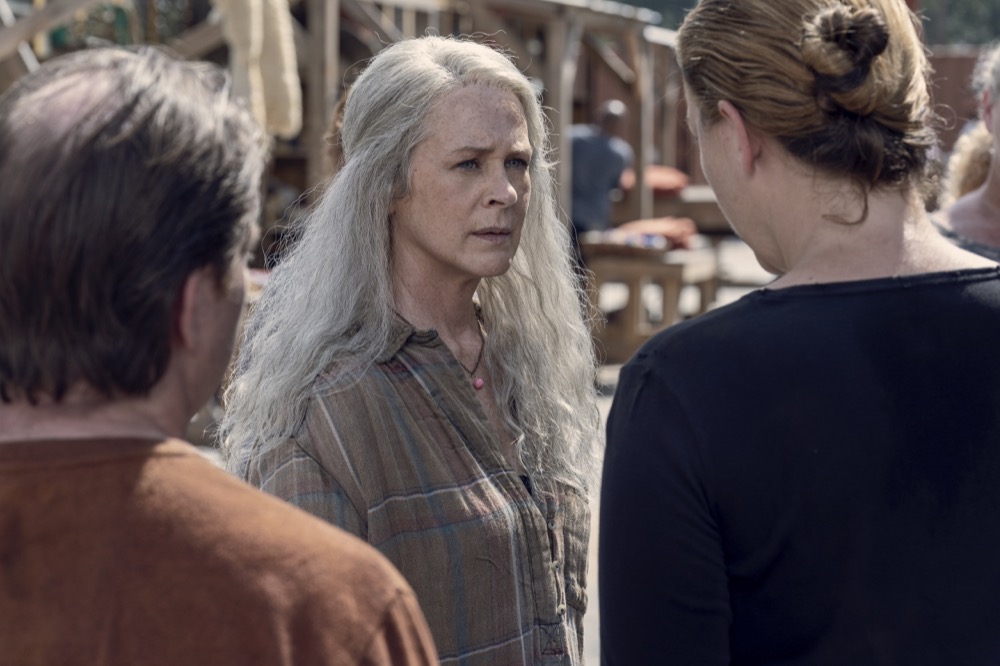 This works firstly because The Highwaymen are a ridiculous group of wannabe badasses (though they survived this far, so they must be doing something right). Their leader, Ozzy (played by Fargo‘s Angus Sampson), wears a cowboy hat and looks like a country singer. So it makes sense that these are the sort of people who would want to come and see a movie after numerous years without cinema – especially if it’s a western. And it further proves the point I was making last week about the love triangle. Not everything has to be handled with violence. Sure Carol will kill if she has to, but she knows that a group who sends a grammatically correct ransom note is probably easily swayed. It all leads to an excellent moment as The Highwaymen swoop in and rescue Tara and some Hilltop residents on the road to the fair. And I’ll admit it, I identify with Ozzy on a deeply spiritual level. In a world gone to hell, you’re damn right I’d pick up the biggest Stetson I could find and make a name for myself. But all this working together is refreshing. It’s a new world, one where we can all hopefully just get along… 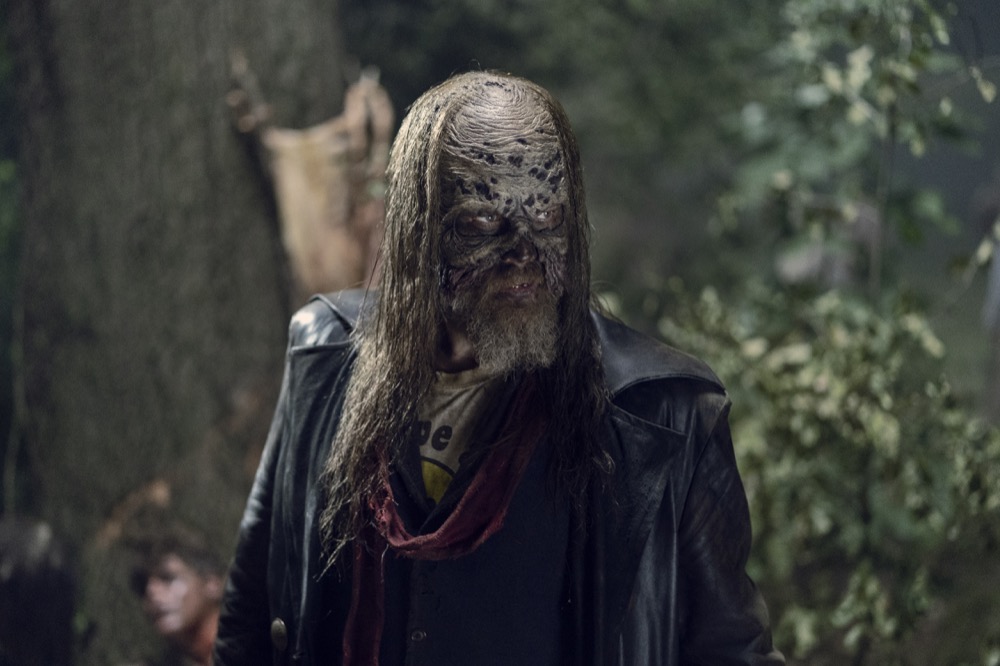 But not if The Whisperers have anything to do with it. The show is doing a great job of adding depth to these characters that the comic failed to do. As one Whisperer is about to turn, Beta whispers (duh) calmly that “the change is coming.” Having this freaky, almost religious aspect to them is creepy. And the idea that they surround themselves with people that used to be their friends and family is even creepier. But the focus this week is on Beta; the big, brooding tank of a right-hand to Alpha. Ryan Hurst brings his a-game here, looking equally as terrifying walking slowly next to some walkers as he does when he throws himself through drywall to kick Daryl’s ass.

And speaking of the fight, what a showdown! But we’ll get there. After rescuing Lydia and Horny Henry at the end of last week’s episode, Connie suggests they hold up at a nearby building. She’s been there in the past and there is a well-stocked stash of essentials. Connie is actually starting to give Daryl a run for his money as far as survival skills go. And the slingshot seems like a really smart weapon too. Her relationship with Daryl is always fun to watch, as she’s as stubborn as he is. But he needs someone like this to bring him out of his shell after countless seasons of eating dogfood sandwiches and being moody.I wasn’t sure about her plan at first, but then it began making sense. Go to the top floor, no way up for the walkers. The Whisperers would have to separate and from there the gang could just pick them off 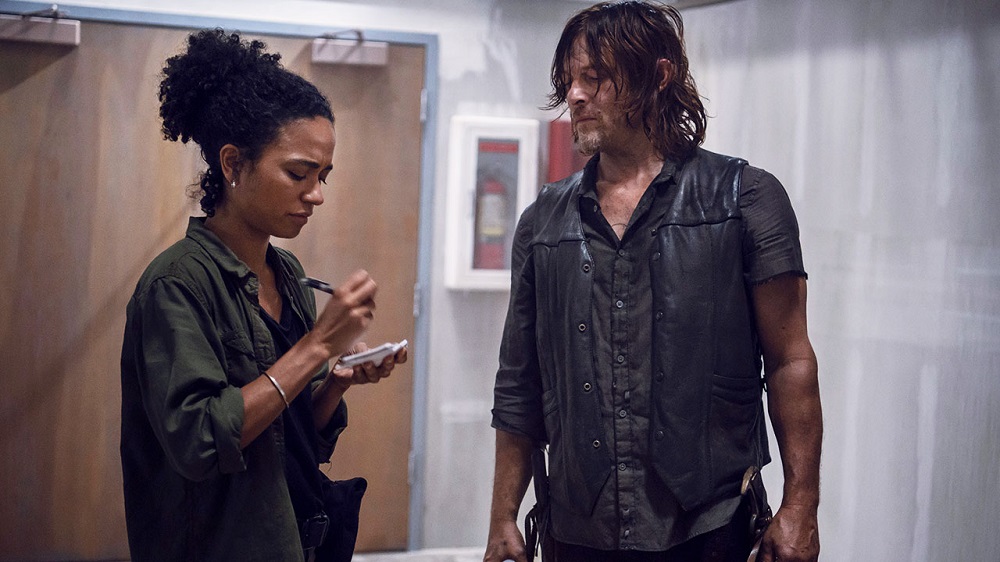 It starts off well, with Connie and Henry taking out a few. Daryl gets an insanely cool kill with an axe through some plastic sheeting. But then Beta shows up and goes all Rainbow Six Siege, using a shield to block Daryl’s arrows. The lack of firearms in this world since the timeskip has meant hand-to-hand combat is the way forward. I enjoy seeing the groups have gunfights, especially back when Rick was involved. But it’s undoubtedly more entertaining to see two characters fight one-on-one. And this fight is in the top five. Beta jumps through walls, punching through walls, and basically throws Daryl around like a ragdoll. The fight becomes a knife fight a one point, which is really cool to watch. Beta’s giant knives make him look like a Dead Rising pychopath. After a few absurdly entertaining minutes of this, Daryl plays it smart, tricks him with a switcheroo, and pushes him down a lift shaft. But of course he’s ok. Just look at him, he’s a beast and it’s going to take more than a four-storey fall to stop him.

This episode is the highlight of an already excellent ninth season. How many shows are this entertaining on their ninth season!? The fight is great, the interactions are all well done, and it balances the heavier stuff with comedy. It’s first-rate TV.

Next week, a flashback, as we discover what the deal is with those scars.