“I can be so much more than that. I can help you.”

They say a story is only as good as its villain, and The Walking Dead has a phenomenal villain. I’d argue that the villains have always been the best part of the show. The Governor and Negan are iconic, though it’s true that not everyone liked them. But Alpha is cut from a different cloth. There’s something so watchable, yet off-putting, about the way she crouches around, whispering orders at people. And in this episode, we meet her right-hand; the intimidating Beta.

We get a better look at the Whisperer community in this episode, as Lydia is led back to camp. They’re a pretty rough-looking bunch of guys, but their tactics seem to be working. They all live like animals, travelling in “packs”, eating what they can, and scrounging as they go. Alpha commands their respect, but it seems anyone can challenge her for leadership if they have a problem. Just don’t be surprised if she sneaks behind you and decapitates you with a garrotte. That’s exactly what happens here, as two of her pack accuse her of bending her own rules to save Lydia. It’s a brutal scene, and one of the most shocking scenes of violence the show has seen since the infamous Negan introduction (and well done to the props department for making the first severed head in the history of television that actually looks like the person). Alpha is a lot like Negan, but even he didn’t commit these acts of violence if he could avoid it.

But the unlucky Whisperers do (or did) have a point. They point out that their group have a rule that states they will not go back for captured or fallen comrades. But they all went back to save Lydia. It’s unclear whether Alpha is bending the rules for her own gain to save her daughter, or just using her for intel as she tells her followers. When it comes to Lydia, Alpha’s love for her daughter could be her one redeeming quality. Though we already know she’s abusive, and her story in this episode about letting her daughter choke when she was an infant doesn’t generate much sympathy. But like Negan and The Governor, we can see that her twisted worldview makes sense to her, no matter how abhorrent we might find it – a great villain should always see themselves as the hero, doing the right thing. But even Negan’s society of Saviours was easier to get behind than this.

Elsewhere we have Michonne, who along with Alpha are no doubt the “Guardians” of this episode’s title. Michonne is part of a council in Alexandria who all vote on things that will impact the community. But as the head of security with the power to veto everything, Michonne has slowly begun taking over the leadership of what was meant to be a democracy (a bit like the late Officer Friendly himself) and forcing people to do things her way. The main sticking point is the much-hyped fair that’s supposed to take place in a few days. She vetoes it and shoots it down, there’s no way Alexandria is taking part. This again raises the question of what exactly happened in the time skip to jade her so much. By the end of the episode, she’s come around to letting the fair go ahead. But if the fair is even a tenth as disastrous as the comics, she might not even live to regret her decision. 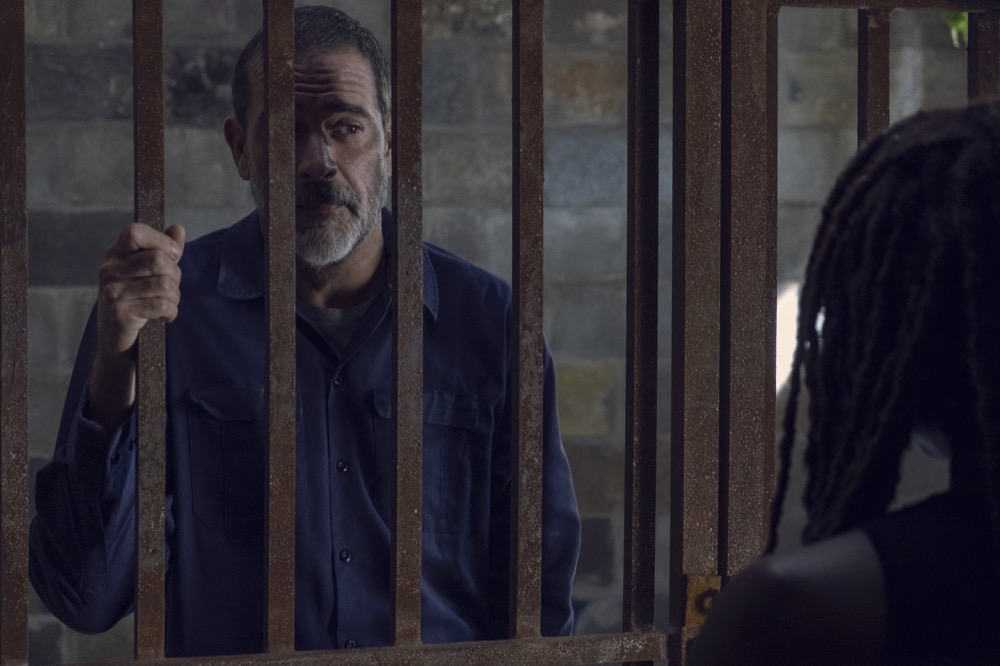 I can safely confirm that I am firmly still Team Negan. The question of whether he’ll betray them is old news now, he won’t. He’s a changed man, or at least he’s willing to help out to make a better world. I agree with his point about Rick. Rick locked Negan up to send a message, which was all well and good, but what now? If he stays there, he stays a bogeyman. If they let him out it shows they are willing to forgive, which is something a lot of people need to be reminded of right now (again, what did happen in that time skip?). Judith is fighting his corner, so we might still get that Grimes/Negan team-up, even if the big man isn’t here to take part.

There’s a weird love triangle (square?) going on in Alexandria. I feel like I’m losing track of things a bit with this. I know Rosita is with Gabriel, and she hooked up with Siddiq in the past and is now carrying his baby, and Eugene fancies the pants off her – is that everything? I’m unclear when everyone found out about the baby. Gabe knew, and so did Eugene (he overheard it). So does everyone know? It doesn’t matter I suppose. Seeing the gang going into the house to work things out (or possibly start a very progressive multi-racial three-person family) was nice and showed that things can be settled peacefully in this new world – there definitely isn’t going to be a Rick and Shane showdown between Siddiq and Gabe. But it all feels very low stakes compared to the threat of the Whisperers. I don’t mind a bit of soap opera mixed with my drama though, and my bet is it’s setting up a tragedy for the upcoming fair. Because seriously, at least two members of that love square will be dead before the end of the season. 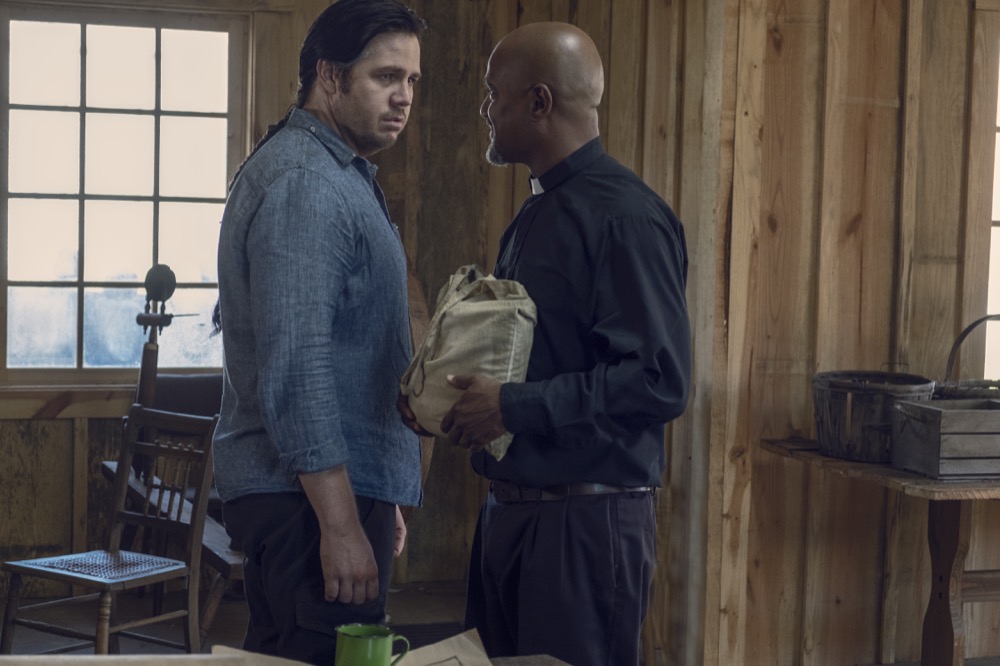 Overall, another great episode. This series has been praised as a return to form, but it’s worth mentioning just how consistent it’s been with that. Every episode, even these slower episodes that are more or less just world-building and setting things up, are the best things on TV. The script and directing is tighter, and the characters are making more rational decisions. Sure Horny Henry is still a bit dumb, but if it wasn’t him it’d be Carl. It turns out that teenage boys are pretty dumb, especially when chasing a girl – it’s not a stretch of the imagination to see why he does what he does.

Again, an excellent episode. Next week looks intense, and the fight scene between Daryl and Beta promises to be epic. I can’t wait.