The biggest show on TV is back and with a stellar hour of depressing entertainment. And there’s barely a zombie in sight. The first episode of this half season focuses entirely on wrapping up the events of the mid-season finale, namely the fate of Carl Grimes (Chandler Riggs). Bitten during the finale, this episode is pretty much one big send off to the younger Grimes. There were a strange group of people during the show’s mid-season hiatus claiming Carl will somehow make a miraculous recovery. I don’t know what show these people have been watching but The Walking Dead has never really been afraid of killing off its characters. And once bit, the chances of recovery were absolutely nil – even for main characters like Carl. So the main bulk of this episode is dedicated to the slow and painful send off to the younger Grimes. But despite the show being in its late stages, it still manages to surprise me with how it handles a characters death.

The main point of Carl’s send-off, I think, is to give Rick the push to spare Negan when the time comes. His final dying plea to his father is to give mercy a try, rather than the tried and tested ‘Rick murders everyone’ method. Carl’s shift to lawful good started a while back but it was his reaction to finding Siddiq early on in season 8 that signified his biggest change. Whilst Papa Grimes has no time or sympathy for stragglers, Carl believes in helping his fellow man. It’s a belief Rick himself held back in the early prison arc, but at that time Carl was too busy shooting The Governor’s unarmed footsoldiers to care (a moment that’s referenced brilliantly in Carl’s last words). The Grimes clan have been all over the alignment chart throughout the series, but rarely have their beliefs completely crossed over. Hopefully, the extreme of Carl last words is enough to push Rick back to the light side. Although looking at some upcoming trailers; Rick’s back in his murder jacket and ready to tear out some throats. It would be a real shame if Negan isn’t spared at the end of all this though, his redemption arc in the comic is one of my favourites. And if not, then what has Carl’s death (a very controversial issue amongst fans) all been for? Hopefully the shot of a redeemed Negan in Carl’s vision is more than just a pipe dream.

The rest of the episode follows Carol (Melissa McBride) and Morgan (Lennie James) on one of their very own murder sprees. It’s something Carol would’ve have been up for not long ago but like Rick and Carl, Morgan and Carol are both constantly changing. Morgan has become the crazy murderer while Carol is the one trying in vain to suggest their’s another way other than killing. Their mission to save Ezekiel is filled with bloodshed (just how many saviours are team Rick going to kill before we realise Negan might actually be going too easy on them?) and the episode’s second saddest death; Gavin (Jayson Warner Smith). Negan’s lieutenant Gavin was always one of the more realistic characters in Negan’s army; his exasperated dad routine was a breath of fresh air from the other psychopathic antagonists. His death (at the hands of Henry, Morgan’s little aikido protege) was a surprise, hopefully it might make Morgan see sense. Because if not, I could see his violent nature coming into conflict with Rick’s oncoming morality change (maybe the flash-forward of a beaten and bloodied Rick was after a bust-up with Morgan and not Negan?) 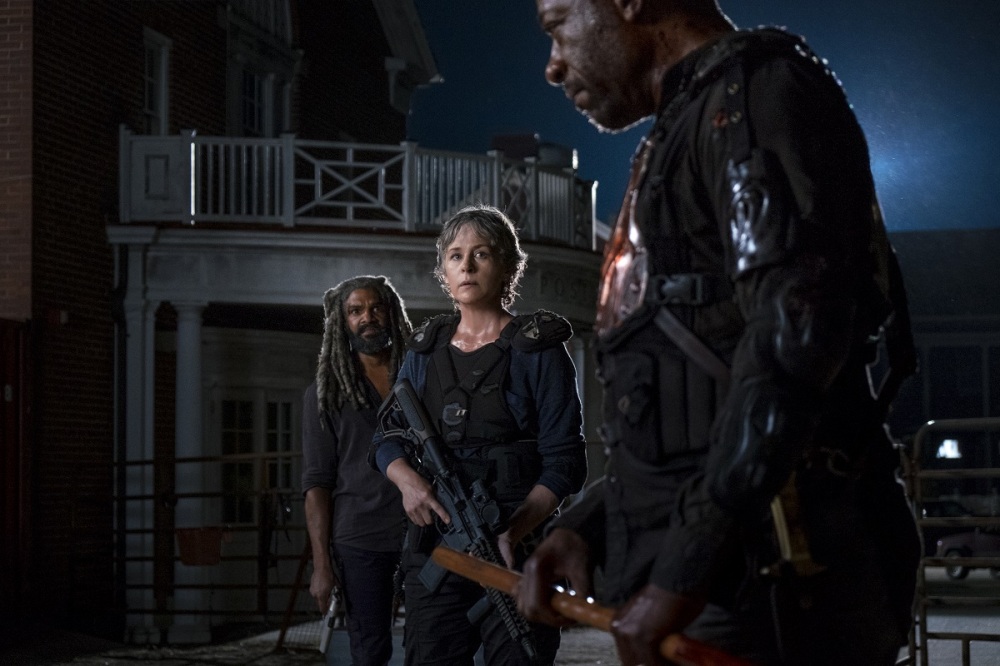 The midseason premiere of season 8B of The Walking Dead is a fantastic hour of TV and TWD at it’s best. It’s not going to change anyone’s opinion of the show but as a send off to a fan favourite character, it’s one of the best. It’s a shame to be seeing the last of Chandler Riggs, who’s morphed from a child actor into a genuinely engaging performer right in front of our eyes over the last 8 years and his final performance is his finest. Negan’s becoming good was a big leap in the comics, one show watchers wouldn’t have accepted. And while it was a ballsy move to kill off one of the handfuls of original characters left on the show, if we get the good-Negan arc out of it then it’ll have been worth it.

A movie buff who recently completed his Film Studies degree at Edge Hill University.
%d bloggers like this: