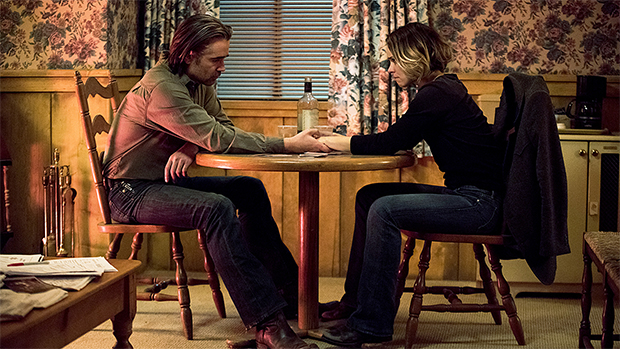 “In the midst of being gang banged by forces unseen, I figure I’d drill a new orifice, go on and fuck myself for a change.”

Ah poor Vince Vaughn. He took a lot of crap in the beginning of True Detective Season 2 but after the last couple of episodes I don’t think there is anyone doubting how good an actor he is. I’ll admit, before the show started I thought Vaughn would be stuck in his permanent Peter La Fleur mode, but he’s showed another side to himself. The whole of the main cast has shown something new and should all be praised. The show still probably won’t be to everyone’s tastes, it’s still laughably over-complicated, and there are still enough lines that are equally brilliant and awful, as this week’s review quote shows. But I’m still enjoying it immensely, and judging from viewing figures, so are a lot of people.

After last weeks big finish, revealing to the audience that almost every single suspicious person in the season get together for a weekly sex and drugs party, this episode had a lot to live up to. And it did, mostly. The beginning was a little slow, recapping over important aspects and then, conversely, rushing over others like the death of Davis and the subsequent framing of Ray. After this though, the episode really opened up and it was cool to see something forming between Ray and Ani. Paul, like usual, was on the outside looking in, dealing with his own gay related problems. We all sort of knew these secrets he was hiding  would bring him down in some way but to see him get coldly executed at the end of the episode was especially painful. I’m not going to get bogged down on whether Pizzolato’s representation of the homosexual characters was troublesome or not but I will say this; it was good to see a gay character being the most bad ass one on the team, even if he did get killed. The cold, ruthless way he took down those guys made it even more painful when he was killed – Ray and Ani could have really done with his help in the upcoming finale. The fact that he didn’t even get killed by a big character makes his death even more tragic, with the man pulling the trigger being Ray’s boss/friend whose only popped up a couple of times. But that sums up this season of True Detective; the smallest of supporting characters are going to end up being important. Nothing illustrates this better than the ridiculous way Vaughn grieves for Stan, a character we saw only once or twice and barely even spoke. This isn’t necessarily a bad thing though as many will have you believe, and it’s fun to see a show reward such attentiveness, but it does create a few funny moments, especially during any mention of Stan.

Paul’s shootout was a particular standout moment this episode, and it was satisfying to see some people paying for their crimes. Woodrugh going all Paul of Duty on his Black Mountain buddies was fun to see, but it’s hard to see how that will positively impact Ani and Ray. Paul paid for it almost immediately and it’s only a matter of time before our other true detectives pay a similar toll. Despite the fact that it might not be a lengthy hook-up, it was nice to see Ani and Ray hooking up as they were pretty much perfect for each other what with their depressing back stories and rampant alcoholism. And if Ray and Ani are doomed than their is absolutely no hope for Frank. He’s trying to get out clean but that’s probably not going to happen; I doubt Pizzolato will repeat the surprise happy ending from season 1. Whatever happens in next week’s 90 minute finale I’m sure it will be an interesting watch as always. All that’s left is to see if everything wraps up neatly and if what’s left of the shows eponymous true detectives make it out whole.