“You set this course, Rick. Who’s next?”

Damn, it seems like this season is definitely heading there; to the redeemed-Negan arc that I’m pretty sure’ll piss off a lot of show watchers. It might not have seemed like it from Rick and Negan’s death-threat filled conversation that closed the episode, but we’re on the road to peace. Plus this week we get the beginning of a storyline that suggests Negan isn’t the chief psycho in the saviour camp. Maybe his way of keeping the peace isn’t all that bad when compared to the alternative of his lackey  Simon (a fantastic Steven Ogg). Using this, and what we know about the characters (Rick’s arc is due another peaceful phase) and the clues provided to us in previous episodes (the recurring flash-forwards to a shell-shocked Rick) it’s safe to say the show is heading there. Or maybe not. Maybe they’ll pull the rug out from under again like they did with Carl and completely surprise and infuriate us. 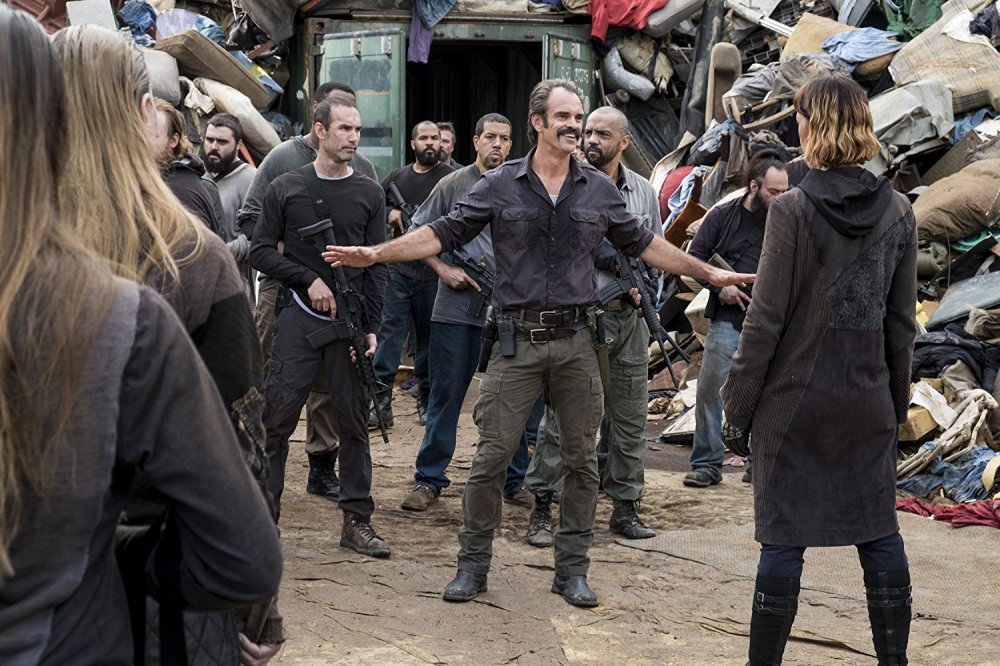 The show once again tried some questionable tricks this episode; messing around with narrative, making it non-linear, and inserting some B-movie-esque, impact bold font title cards. This sort of stuff is bound to piss some people off but I love it. It’s these strange choices that make The Walking Dead as hugely enjoyable as it is. Even the cheesy 80’s crash zooms were a lot of fun and not at all what I expected in the first episode after Carl’s death. The chopped up narrative also added to the tension within the trash-people storyline. I liked that Simon simply wiped them all out, and all in the space of a few minutes. Sure this quick dispatch was most likely in response to negative fan feedback, but then again the show made a bold choice to keep Jadis (Pollyanna McIntosh) around for a while longer. I’m personally quite glad of this as I’ve always felt she had much more to give. The scenes of her talking to Rick and Michonne (in full, complete sentences no less) and then leading all of her entire zombified brethren into the grinder was truly heartbreaking. Fault the show for its use of the trash folk but you certainly can’t fault it for trying their damnedest to get something great out of it. It helps that McIntosh is a fantastic actress also. Weirdly, now I can’t wait to see more of Jadis.

God only knows what’s going to go down with Enid and Aaron at Oceanside after their wierd visit there this week. After Enid killed the Kelsey Grammer-in-drag-looking leader last season I hadn’t really given it a second thought. But new leader Cyndie (Sydney Park) is a cool character so I could stand to see more of Oceanside. I just wish more had come out of this episode as Aaron and Enid had very little to do. That’s all forgotten however with the Rick/Negan conversation towards the episode’s end. Turns out Carl wrote Negan a letter too, so Rick hits him up on the walkie and pretty much tells him he’s going to murder him. Maybe if he read Carl’s letter he’d work out what he meant when he said ‘stop fighting’ because it doesn’t necessarily mean giving into The Saviours. But Rick’s in shock over the very recent death of his first born so we can forgive him for being a tad angry. Plus it means we get to see the two finest actors on the show hurl threats at each other and give awesome monologues. Andrew Lincoln’s Rick Grimes is one of the greatest TV characters ever and Jeffrey Dean Morgan is hands down the coolest man alive so a conversation between the two of them is always fun. Negan show genuine respect and sadness for Carl, which a neat touch. His whole ‘you failed as a father’ speech to Rick is cruel as hell but it hurts so much because there’s just a little bit of truth to it. How the two will reconcile like the recent events of the comic is anyone’s guess but mark my words; it’s gonna happen.

So that was this week’s The Walking Dead. It was a great hour of TV all in all and a good sign that The Walking Dead knows how to fix it’s mistakes (Jadis). There were some awesome effects (the mincer will go down as an all-time best zombie kill) and season-best confrontation between Rick and Negan. But best of all, this episode proved that TWD is on the right track to wrap up the AOW storyline in a satisfying way. Well, for some of us. I’m sure the idea of Negan joining team Rick is literally the worst thing that could happen for some people. I can’t wait!