“Do you know what happened to the Neanderthals, Bernard? We ate them.”

Episode 9 of Westworld, ‘The Well-Tampered Clavier’ (named after a collection of music by Bach) provides the answers to many of the most prevalent fan theories being floated around by the fan base. Multiple time lines: yep. Bernard is Arnold: you betcha ya. William is the Man in Black: well… most likely. There were some amazing performances in the episode once again, especially from Jeffrey Wright and Anthony Hopkins, and I really hope Wright especially gets some recognition when award season rolls around. Episode 9 also managed to give nearly every character some plot development and even found time to continue asking the show’s big questions about humanity and consciousness. 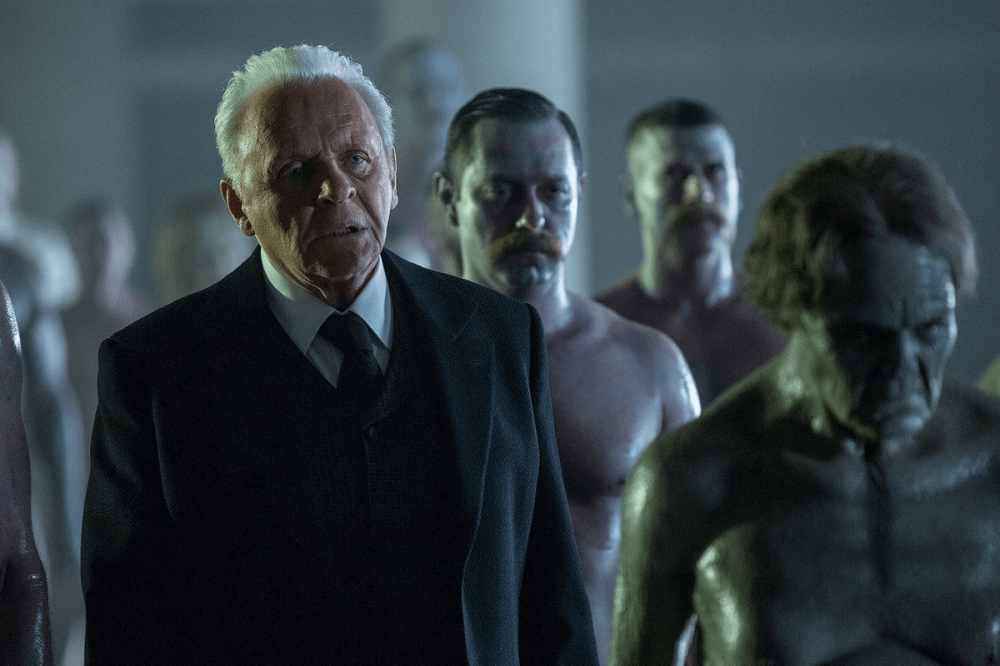 Jeffrey Wright is fantastic once again as Bernard, who has it rough this week. He’s once again subjected to recalling his past and Wright perfectly encapsulates these feelings of Bernard coming to terms with his reality. After Ford put his mind at ease last episode, Bernard was more or less back to normal. But an encounter with Maeve makes him aware of his robotic nature and he vows to find answers. And find answers he does. The dead son that influences everything Bernard does was just manipulation by Ford, and while the pain felt real, the memories weren’t. The episode also confirms perhaps the most prevalent fan theory in the show; ‘Bernarnold’, the theory that’s been plaguing redditors since the series began. Turns out Bernard was created in Arnold’s image, 20 or so years after Arnold had mysteriously died (although that particular mystery pretty much had an answer this episode too). After this bombshell is dropped Ford has no excuse but to put Bernie down, making him shoot himself in the head. The episode presents this as being the end of the line for Bernard and we know host’s can’t survive major head trauma (the woodcutter smashing his own head open was a prime example of that). But hosts in the park must have been shot in the head before, surely? So personally I don’t think this is the end of Bernard. Perhaps Maeve will have a hand in his resurrection, she’s on the war path and heading straight for the park’s control room after all.

After reminding Bernard of what he really is, Maeve (the excellent Thandie Newton) moves on to making another host self aware, Hector (Rodrigo Santoro). The super-cool, leather coat wearing bandit is one of the best characters in the show but he’s also the one with the least story depth (intentionally). In a nice meta touch it’s this lack of depth that breaks Hector free of his loop. Realising his life is an endless cycle of robbing an empty safe he joins Maeve on her quest, but not before some self-immolation love making. Maeve was a threat before, as we’ve seen, but having a gun toting bandit as a sidekick will make her a force to be reckoned with. The Maeve-Hector power couple is awesome, but if it came down to them vs Ford then I don’t know who I’d want to come out on top. Anthony Hopkins’ Ford is so damn enjoyable it’d be a shame to lose him. Talking of humans in danger, nobody seems to be overly concerned about Stubbs. Going up to the surface after a notification from Elsie, he is attacked by a group of Ghost Nation warriors who ignore his order to stand down. A prevailing theory is that Elsie wasn’t killed by Bernard and she is directing these hosts to get Stubbs so he can help her, but that doesn’t make much sense to me. If this was Elsie’s doing there would be much easier ways to get a meeting with Stubbs without the higher ups knowing. No, I think this could be Ford’s way of silencing park workers allied with Hale and the board. I doubt he’s actually dead but whatever’s going on, it’s doesn’t bode well for him.

Ed Harris pops up too, after him and Teddy (James Marsden) were captured by Angela (Talulah Riley). Turns out she’s self aware too (she too is one of Arnold’s originals) and she knows all about the loops Teddy has lived. Teddy’s flashback to gunning down a town full of innocent people (well, hosts) was a cool moment; Teddy emerging from the smoke gunning down an innocent woman was as far away from his original good-guy image as we could get. Whether this was real or not, it still has sinister consequences and it paints a particularly cruel picture of Ford and all of his string pulling. I don’t think James Marsden gets enough recognition for his performance, but he’s been reliably great throughout the whole season. His reaction at the realisation he may have slaughtered an entire town was heartbreaking. Not that the other people in the scene haven’t done equally awful things though, Teddy’s sharing the scene with the child murdering Man in Black after all. It’s revealed this episode that Ed Harris’ MiB is on the Delos board, the people who own the park. What this means for the finale is anyone’s guess but it’s yet another piece of evidence in the MiB = William theory. Remember Logan’s family are investors in Westworld, a family that William is marrying into. Plus Jimmi Simpson’s William has a very Man in Black type outburst this episode, brutally killing a ton of hosts. It’s still possible that Logan (Ben Barnes) is the MiB too (hell, the evidence I just listed works for Logan too) but it’s the connection William and the MiB both seem to have to Dolores that convinces me.

This episode also pretty much confirms another fan theory, that there are two timelines. Logan showing the picture of William’s wife-to-be to William, and it being the same picture Abernathy dug up in the first episode was one thing. But Dolores being an old school metal robot in the Logan/William scene sealed it. With this, the Bernard reveal, the strong suggestions that William is The Man in Black, you’d think there would be no time for anything else. But it’s a credit to show runner Nolan and director Michelle MacLaren, who skilfully pull it off and create one of the best hours of television I’ve seen all year. MacLaren supplies some gorgeous visuals to accompany the head scratching reveals and the actors all bring their A game. Next weeks 90 minute episode might no be able to wrap up everything left but I’m certainly looking forward to watching them try.

One thought on “Westworld Episode 9 – ‘The Well-Tempered Clavier’ Review”