“You best start believing in ghost stories, Miss Turner. You’re in one!”

Nobody expected Pirates of the Caribbean: The Curse of the Black Pearl to be much of a success. For starters it was based on a theme park ride, which sounds like a bad idea however you describe it. Second, Johnny Depp wasn’t really considered leading man material. An excellent actor but perhaps not the right person to hold a franchise on. And thirdly, well pirate movies just weren’t making money. Cutthroat Island a few years earlier was an infamous box office flop. But lo and behold, The Curse of the Black Pearl wasn’t just a success, it was a cultural phenomenon. And it’s a great movie to boot.

From the first few minutes of the film, you already believe your back in the early 18thcentury. The attention to detail is remarkable, from the weapons and decorative outfits to the huge hulking galleons that this setting and genre is famous for. The film opens with a young Elizabeth Swan on board a ship with her father when they come across a shipwreck. The only survivor is a boy her age with a pirate medallion around his neck, Will Turner. The characters in the film are memorable and have become iconic for a reason. Will is the dashing love interest to the ladylike Elizabeth and I reckon Orlando Bloom gets a lot of unfair hate for his role in this series. His performance is perfectly fine and his appearance is reminiscent of the great silver screen actors of the 40’s and 50’s, along with the Errol Flynn moustache. Keira Knightley is awesome as Elizabeth and isn’t just another damsel in distress, she can kick ass when she needs to and she holds her own against the pirates.

The film is most famous for introducing the world to Captain Jack Sparrow. And what an introduction it is, Johnny Depp’s Captain Jack heroically drifting into port on the mast of a sinking ship perfectly describes him in just a few shots. Captain Jack has been done to death by impersonators and fancy dress costumes so it’s easy to forget just how new this character felt at the time. As Roger Ebert wrote in his review “It can be said that his performance is original in its every atom. There has never been a pirate, or for that matter a human being, like this in any other movie.” And even now, over a decade later, he is one of the most entertaining characters put to film. Perhaps the sequels go too far with his backstory, or take away some of his mystery (we’ll see in the coming weeks) but as it stands in The Curse of the Black, the character is perfect.

A lot of criticism for this film that I’ve seen, seems to draw from the actions scenes. The fighting is spectacular, but many critics said that because the villains cannot die, there are no stakes in the set pieces. For me this just ramps up the tension. Towards the end of the film the evil crew of the Black Pearl board the HMS Dauntless and take on the soldiers of the British navy. The bad guys not being able to die makes this all the more tense because it’s up to Jack, Will and Elizabeth to lift the curse before Norrington and his men are slaughtered. At least that’s the way it has always felt to me. Also the in the fight between Barbossa and Jack, you may know that neither can die but it is still a thrilling fight to watch. And it’s more about how they will defeat the bad guys, rather than who will kill who. I think the swordfights in this film (and the whole Pirates franchise) are excellent. Director Gore Verbinski can choreograph action like no one else, and this film gives us a look at the awesomeness to come. The fight in the blacksmith shop is a perfect example of the type of action Verbinski handles so well, with two characters balancing on something and fighting each other, being thrown through the air, running around etc. You never lose sight of the players in the scene and you never become confused as to what exactly is happening. Verbinski uses the space and makes the most out of every action scene. 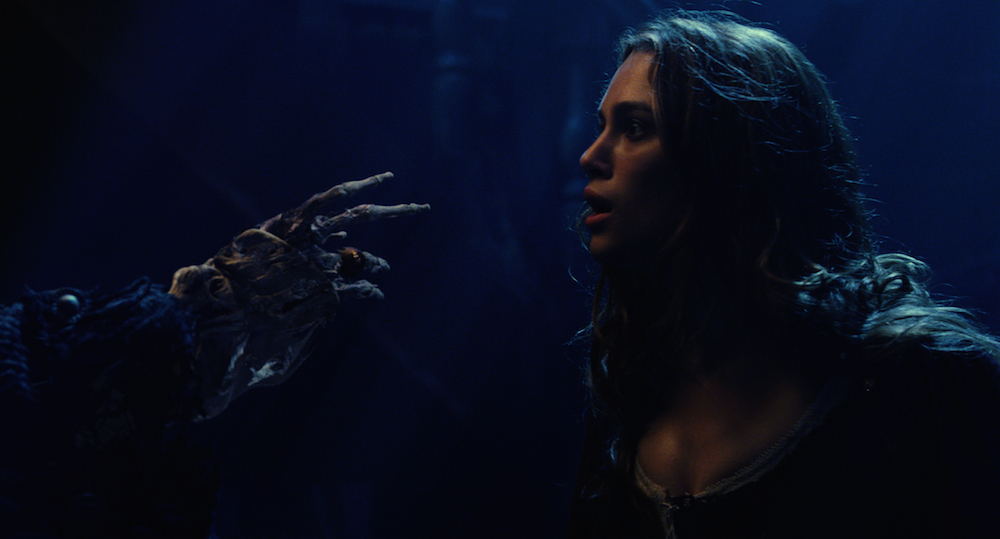 Another criticism often levelled unjustly at this film (although perhaps more justly for the sequels) is that it is overlong. Clocking in at 143 minutes, it’s certainly not a short film. But it is an epic adventure through and through, introducing a potential world of characters. None of the scenes feel dragged out, plus it’s so much fun spending time with these new and interesting characters that the minutes fly by. A lot of critics seemed to think if it was a 90 minute b-movie, it would be better. But that is not this film. It’s a grand fantasy with even bigger characters that need the space to really shine. A few reviews I’ve seen have pointed to the end of the film as an example of this film being overstuffed, that even after the conclusion it carries on. But this scene is by far one of the best. Will saving Jack from the gallows captures the adventurous feel of the movie perfectly and it’s a great way to end it. Plus Will’s hat is the coolest hat ever.

The story feels like a classic swashbuckling tale, a bunch of greedy pirates steal cursed gold. But the rules of this gold are established well and the curse being played out is very interesting to watch. This is helped by the CGI which has aged very well. The scene in which Barbossa walks from the dark cabin into the moonlight, changing from Geoffrey Rush into a decayed walking skeleton, is as spine-tingling as it was when I saw it in the cinema. The spookiness of the villains is helped greatly by the PG-13 rating at the time, letting it be just that little bit more scary and violent. The script to the film is better than I remember, with loads of funny lines and a lot of nice themes running throughout, Will and his dad being an especially strong element. The truth about his father is hinted at throughout but not revealed until the end, so it doesn’t feel like exposition but instead integral to the plot. The same is true of Barbossa and Jack’s backstory. A special mention should be given to the music. I know that it is famously similar to The Rock or Gladiator but when it first kicks in as Jack swings away from a barrage of rifle fire, the music was made for this film

Pirates of the Caribbean: The Curse of the Black Pearl didn’t need to be this good. It’s based on a ride, so if it was just average people would have been surprised. But it was one of the biggest films ever, and it was actually great.  The film is above all else very well made. From the directing to the acting, it’s all superb and it all works together to make something amazing. It also has a consistently jaunty tone but isn’t afraid to have a few serious or scary moments. This supernatural adventure on the high seas is highly recommended.